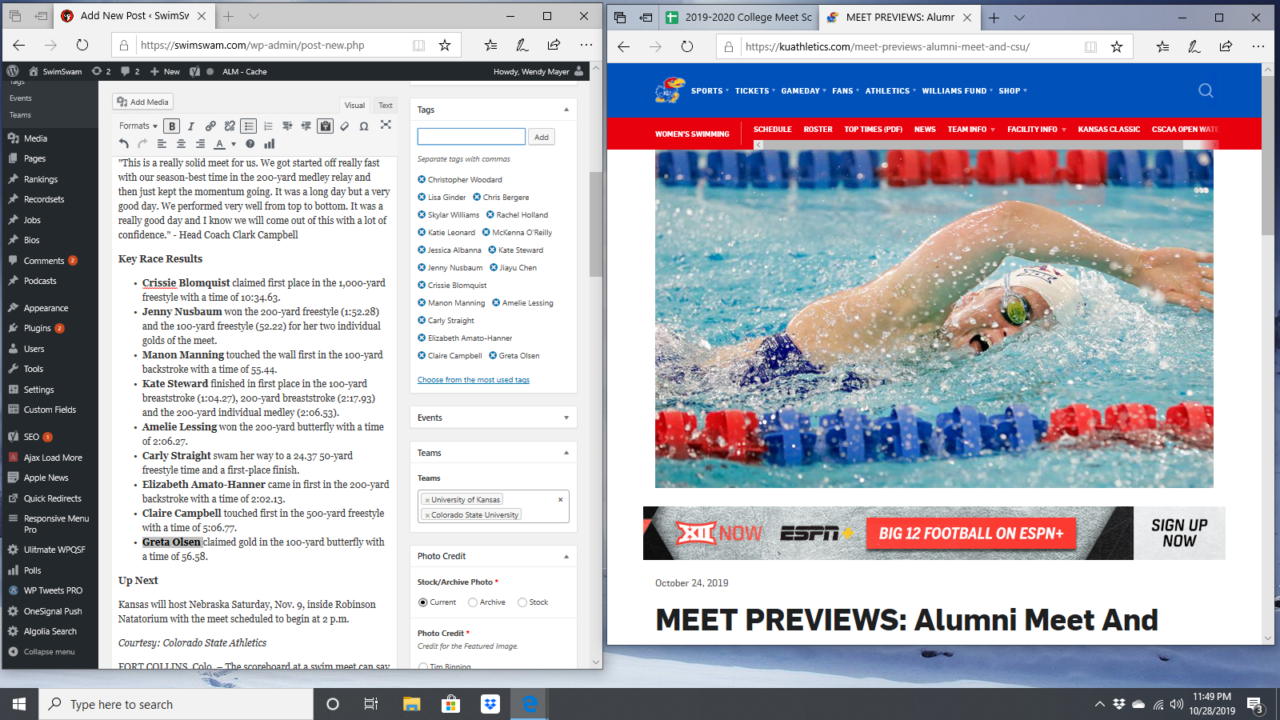 FORT COLLINS, Colo. – Kansas swimming and diving earned their first road victory of the season over Colorado State 214-84 Saturday, Oct. 26, inside Moby Pool. KU claimed first place in all 16 events in the meet.

The Jayhawks swimmers were led by sophomore Kate Steward and senior Jenny Nusbaum on the afternoon. Steward finished with a team-best three individual first-place finishes in the 100-yard breaststroke (1:04.27), 200-yard breaststroke (2:17.93) and the 200-yard individual medley (2:06.53), giving her a team-high 27 points earned. Nusbaum was not far behind Steward as she finished with two first-place finishes on the day in the 200-yard freestyle (1:52.28) and the 100-yard freestyle (52.22).

“This is a really solid meet for us. We got started off really fast with our season-best time in the 200-yard medley relay and then just kept the momentum going. It was a long day but a very good day. We performed very well from top to bottom. It was a really good day and I know we will come out of this with a lot of confidence.” – Head Coach Clark Campbell

Kansas will host Nebraska Saturday, Nov. 9, inside Robinson Natatorium with the meet scheduled to begin at 2 p.m.

At Saturday’s lone host assignment of the season for Colorado State at Moby Pool, the results were showing the Rams were having a hard time keeping up with visiting Kansas. Not beating the Jayhawks was one thing, but many of the Rams – especially the divers – were beating themselves, and that was progress CSU head coach Christopher Woodard needed to see at the end of a 214-84 dual loss.

“Our 200(-yard) flyers specifically, all of them really pushed their best, and I think they all had a season best. I’m really impressed by the fact they knew the score was out of control, but they didn’t back down,” Woodard said. “They still raced on that last relay. I think popping 52.9s and 53s and going 3:31, that’s probably going to be our best (400 freestyle relay time) going into Houston. There were a lot of positive spots, good under waters, good tempo.

“But, as I told them, it’s really important we start making that commitment on a regular basis. When they go home tonight, they need to think about what can I do better and they need to bring that into our training. That’s how we’re going to get better. It’s a long season, and we still have time, but we have to make the commitment now.”

Woodard brought two new coaches on board his staff, and while the swimmers may still be adjusting to the teachings of assistant Lisa Ginder, they also have consistency of Woodard on deck.

Over in the diving well, there isn’t a buffer as they adjust to Chris Bergere, and those relationships take time. What the meet results show is a bond is taking hold.

By the end of the meet, the top three scores for the season on the 1- and 3-meter boards all had to be replaced.

“That’s encouraging. I think the kids felt that today, too,” Bergere said. “They beat us pretty handily, but it was possible. The possibility is there, and that’s always exciting. I think we did that pretty well. We didn’t come out on top, but I think they came out feeling good about their performance, and I certainly did.”

Skylar Williams raised her best 1-meter score of the season by more than 22 points, and just eclipsed her 3-meter mark, and Rachel Holland improved on both boards. Katie Leonard, McKenna O’Reilly and Jessica Albanna all rose their marks on one board or the other.

Bergere knows his group can complete tougher dives, and after two months of working with them, he knows the process is in place for steady improvement.

As a Zones qualifier last year, Williams would have had the most to worry about in terms of the routine changing, but the junior feels Bergere has given it a natural feel toward a promising future. Her 261.98 on the 1-meter and 259.80 on the 3-meter backed her assertion.

“It was actually a really easy transition for Chris to come on our team. I felt like he belonged there all along,” Williams said. “We really just bonded close with him, and he’s helped us a lot. Getting to know each of our individual styles and what works for us, it’s just been a really great help.

“We definitely have a good foundation. We really have the fundamentals down, the basics. Everything you need to build up upon that. From here on out, I feel were on the up and learning more dives every day.”

In the lanes, the Rams’ best events were the 200 and 100 butterflies, both a 2-3-4 finish for the team, as was the 200 individual medley in the next to last race.  Senior Julia Box, who was celebrated prior to the meet with classmates Andrea Basile and Marie Goodwyn, was second in the shorter race, third in the longer as freshman Amanda Hoffman took the lead role.

Box also anchored the 400 free squad, which placed second. Seeing Kansas open up quick was tough, but like her coach, she was impressed her team was undeterred.

“I would say our attitude overall was pretty solid. We’ve talked about our team culture a lot, and today just showed what we’ve been describing,” she said. “We truly showed what we’ve talked about when our team culture has improved. We stuck to our guns, we never backed down, we never stopped cheering, we never stopped supporting our teammates, and I think that’s very telling about what kind of team we are now.”

For instance, Basile had the unfortunate circumstance of being the only swimmer in a heat of the 100-yard backstroke. She may have been the only person in the pool, but as she pushed off from the blocks, all she could see before she hit the water as a large and rather green-clad group behind the blocks.

The entirety of the team was there, yelling and screaming each time she hit a flip turn at that end of the pool.

“That was one of my favorite moments of today. I thought she was a good sport about it,” Box said.  “She really took it in stride, and when the whole entire team was behind the blocks – without question – and we were all cheering for her, it was one of those funny, this-is-kind-of-awesome moments.”

In a pool, those don’t always show up on the board.