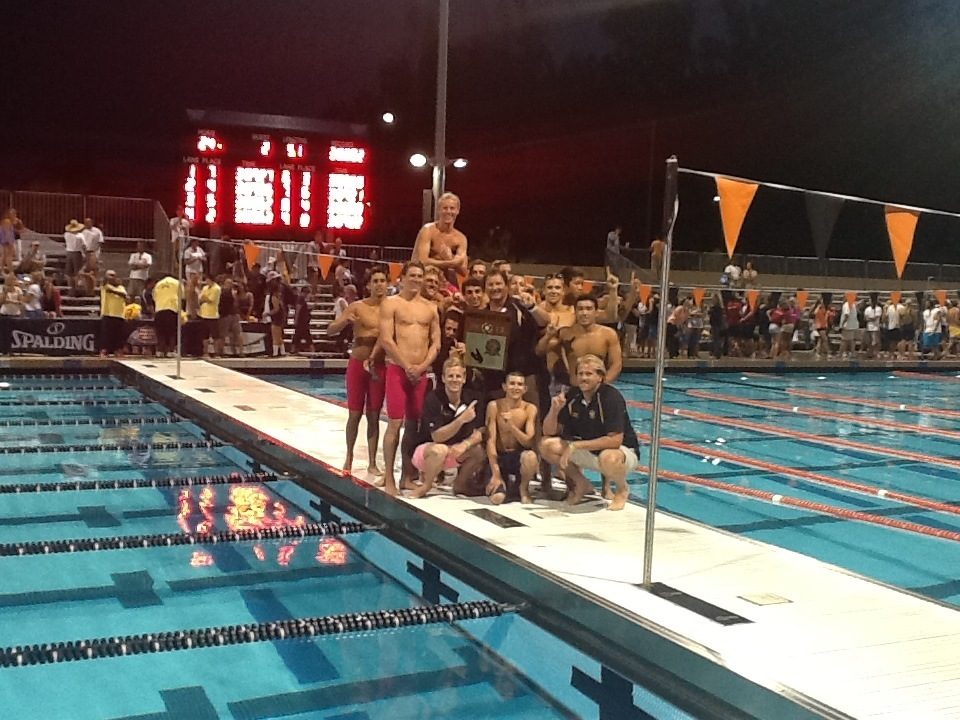 Thanks to Anne Lepesant for leading our coverage on the 2013 CIF Southern Section Championships this weekend.

Southern California’s high school swimming and diving championships wrapped up Saturday night with the Division I contest at Riverside Aquatic Center. And yes, it lived up to the hype.

Last year’s 9th place finisher in the 200 IM had a stunning victory this year: JSerra sophomore Karli Thuen split an incredible 28.19 free at the end of the race to touch out Foothill freshman Courtney Mykkanen. Thuen was out first in the fly, but Mykkanen’s 28.74 back split had put her in front of the field by 1.5 seconds; Thuen was in 4th at that point. At the end of the breast it was Mykkanen, Edison’s Devin Newton, and Thuen. But Thuen proved too much with her final 50 as she finished in 2:01.81. Mykkanen went 2:01.99; Newton was 2:03.63.

The sprint events all belonged to Saugus sophomore Abbey Weitzeil again this year. Last year’s champion, Weitzeil had a record-breaking prelim swim on Thursday with her 22.58, downing Courtney Cashion’s 22.75 mark from 2004. She notched it up another level in finals, setting a new record of 22.25. That already ties her for 6th on the all-time 15-16 list (with Missy Franklin) and is one of the fastest high school 50 frees we’ve ever seen.

The battle for second was intense, with Corona del Mar senior Brynne Wong (22.94) getting to the wall just in front of JSerra sophomore Kaitlyn Albertoli (22.96).

Katie McLaughlin of JSerra was back breaking records again in the 100 fly. The defending champion crashed through the D1 mark of 53.54 set by Tara Thomas in 2007 with a scorching 52.93. Brynne Wong of Corona del Mar went 54.86 to finish second; junior Anna Quinn of Thousand Oaks was third with 54.94.

Sprint queen Abbey Weitzeil of Saugus won her second event of the day in the 100 free, breaking another D1 record along the way. As with the 50 free, Weitzeil first lowered the mark in prelims (her 49.09 beat Courtney Cashion’s 2004 time of 49.26), then improved it in finals to 49.01. JSerra senior Rebecca Millard (50.17) was second; her teammate sophomore Kaitlyn Albertoli third (50.20).

In the 500 free, top seed Brooke Lorentzen , a junior from Capo Valley, led wire to wire and won easily in 4:45.19. Esperanza senior Michaela Merlihan (4:47.96) finished second and Woodbridge sophomore Daniela Georges (4:50.35) was third. Lorentzen will likely have her sights set on the upcoming Open Water National Championships, where she’ll be shooting for a spot on the World Championship team.

Brooke Lorentzen, who is preparing for the upcoming Open Water National Championships, won the 500 free with a big time of 4:45 on Saturday. (Photo: Victoria Lepesant)

The 100 back wasn’t really much of a contest. Foothill freshman Courtney Mykkanen (53.95) won with a commanding lead over University senior and 2012 champ Cheyenne Low (56.01) and Valencia junior Sophie Fiscella (56.52).

Abbey Weitzeil, champion of both sprint races, broke the CIFSS D1 record for the third time in the meet by leading off the Saugus girls 400 free relay in 48.83.

The boys 200 IM was a thrilling matchup featuring University junior Corey Okubo and breaststrokers Liam Karas (junior, Corona del Mar) and Peter Kropp (senior, Loyola). Okubo’s first two legs gave him nearly a second lead over Karas, and three over Kropp. When the breaststrokers kick it in, though, everything can change. Karas’s 31.12 breast split put him in front by .07 going into the free, but Okubo pulled out a 26.05 final 50 to win in 1:47.07. Karas was second with 1:47.33; Kropp third with 1:50.88.

Redlands junior and defending 100 fly champ Kyle Gornay lowered his own D1 record in the event by .34 to finish in 46.83. That puts him .33 off Joseph Schooling’s national high school record with another year left to make it happen. The silver went to Dos Pueblos sophomore Alex Valente (47.41); the bronze to University’s Corey Okubo (48.44).

The Capo Valley seniors (and future Stanford teammates) Jack Descombes and Spencer DeShon shuffled their podium places from the 50, finishing 1-2, respectively  in the 100 free. Descombes won by .01 although DeShon’s 23.47 second half nearly got him the prize. First place was Decombes (44.99); second DeShon (45.00), third Corona del Mar’s Liam Karas (45.77).

Spencer DeShon finished 1st in the men’s 50 free and second in the 100 free at the CIF Southern Section Championship meet. (Photo: Victoria Lepesant)

The boys 500 free was truly exciting from start to finish. Mission Viejo senior David Heron and Capo Valley sophomore Nick Norman traded stroke for stroke for 20 laps. Heron was slightly ahead the entire way but couldn’t let up because Norman wasn’t going away. Heron finished first in 4:22.66; Norman was second in 4:23.01; and Santa Margarita freshman Grant Shoults was third in 4:26.47.

It was another record for Redlands junior Kyle Gornay in the 100 back. His 47.04 erased the previous 47.50 set by Derya Buyukuncu in 1994, and narrowly missed Vlad Morozov’s 46.90 Southern California mark for 17/18 boys. University sophomore Daniel Tran finished second in 50.15; Edison sophomore Thomas Smith was just a tick behind in 50.19.

There was a lot of anticipation for the 100 breast, as Loyola senior Peter Kropp had swum a monster 54.64 in prelims to earn the middle lane in finals. Second seeded Dylan Payne of Mater Dei wound up with the win, though, as he dug in with an incredible second half. Payne and Kropp are both headed off to Duke in the fall … record alert! The final podium was Dylan Payne 55.28, Peter Kropp 55.54, Tyler Lin (sophomore, Corona del Mar) 56.31.

The 400 free relay belonged to Capo Valley this year. The team of sophomore Rafael Felix (47.35) and seniors Jon Beck (45.87), Spencer DeShon (44.41), and Jack Descombes (44.39) tore up the pool, turning in a 3:02.02 and setting a new D1 best time. The excitement continued in the race for second place. Corona del Mar’s foursome of Liam Karas, Jack Harryman, Richard Barden (senior) and Tyler Lin was just able to hold off an advancing Westlake to take the silver in 3:05.53. Westlake senior Michael Wen ran out of pool and his team finished third with 3:05.60. It was a great end to an exciting meet.

Adding to his list of impressive swims, Kyle Gornay led off the Redlands 400 free relay with 43.89. That swim (an NCAA B cut, by the way) would have won the event here, and was within 0.04 of breaking Derya Buyukuncu’s 1994 meet record of 43.85. A junior, he’ll be going for that record next year.

Katie McLaughlin, Courtney Mykkanen and Abby Weitzeil are the names to remember on the women’s side.
Kyle Gornay on the men’s side.

Gornay is a beast but there are plenty of very good names on the boys side. Okubo for one. It’s interesting that stand out breastrokers Kropp and Payne are both headed to Duke, while the free sprint tandem of DeShon and Descombes are both headed to Stanford.