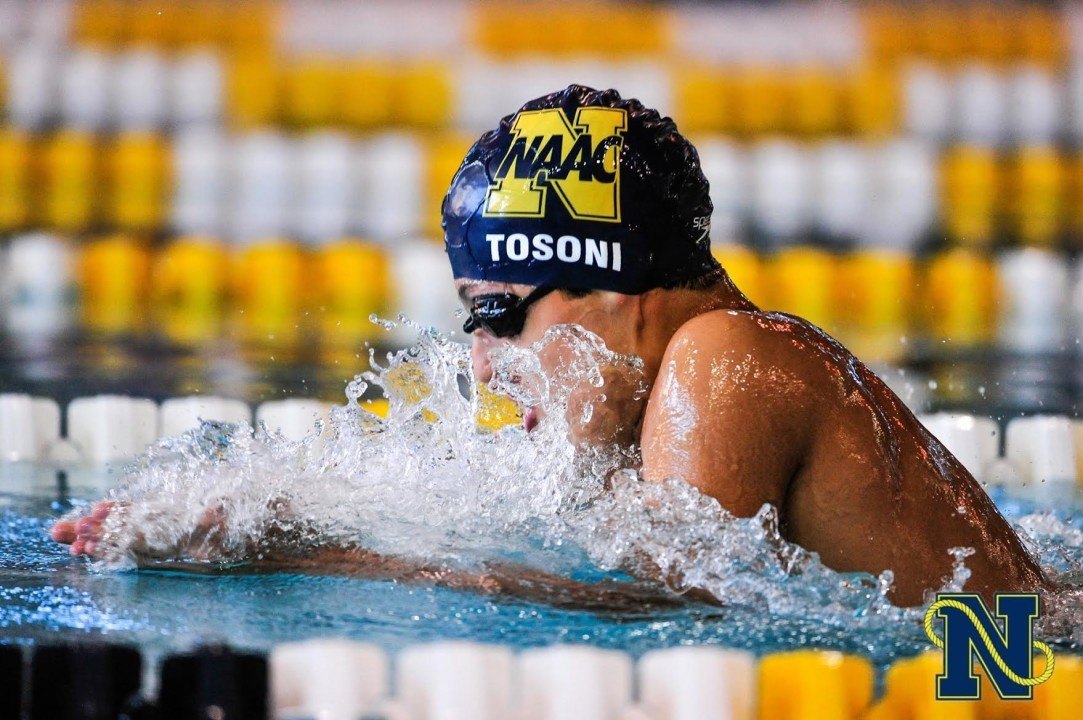 “I committed to Seton Hall because I loved my experience there with the team and the coaches.  I felt that I would fit into the team athletically and personality wise.  I am very excited to be a pirate next year!”

With those words, accompanying a verbal commitment from Arnold, Maryland’s Josh Tosoni, Seton Hall University just may have found itself the diamond in the rough of recruiting season 2015-16. Tosoni has simply exploded over the last two seasons into a national-level breaststroker, and it looks like he has a lot left in the tank to continue improving.

Tosoni had only swum during the high school season at Broadneck Senior High School until the spring of his sophomore year, or about 18 months ago. At that time, the club swimmers on Broadneck’s team convinced him to join the Naval Academy Aquatic Club. He was a 1:05.00 100 breaststroker and had never even swum a 200 breast. Tosoni shared with SwimSwam, “My first club swimming experience was in the summer of 2014. I had never swum long course before so my first season was a bit rough. By the end of the long course season I went 1:16.93 in the 100m breast, 2:54.11 in the 200m breast, and 2:36.48 in the 200m IM. I missed the state cuts in each event by multiple seconds.”

The following short course season things began to fall into place for Tosoni, and he managed enormous drops in the 100/200 breast and 200 IM. He qualified for Junior Nationals and placed third in the 100 breast at states. This summer, in his first real long course season, Tosoni won States in the 100m and 200m breast. Here is his evolution:

Congratulations Josh! There is a ton of talent on local Anne Arundel County, MD summer league teams and high school teams just waiting to get inspired to move up the swimming stream. Another Broadneck HS and Navy Academy Aquatic Club swimmer, Noah Yanchulis, is also a Pirate at Seton Hall. Both of these swimmers started later ramping up their swimming. Great job!