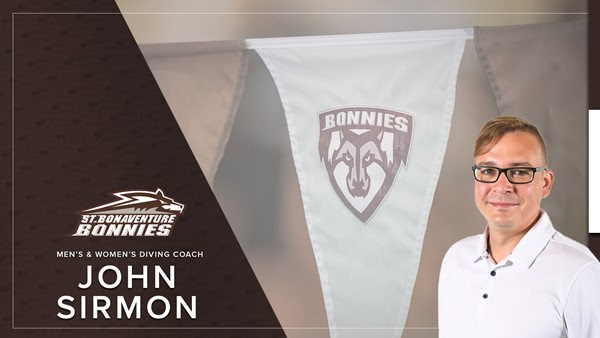 Sirmon joins the Bonnies coaching staff after three seasons at Tulane where he recruited and trained the Green Wave's first-ever diver to qualify for Zones. Current photo via St. Bonaventure Athletics

“We are excited to have John joining the coaching staff,” Nitardy said. “He is enthusiastic and brings quality Division I experience to the program. I think our student-athletes are going to enjoy working with him.”

Sirmon joins the Bonnies coaching staff after three seasons at Tulane where he recruited and trained the Green Wave’s first ever diver to qualify for the NCAA Zone Championship.

Prior to his stint in New Orleans, Sirmon spent three years with the Carolina Diving Academy.

Sirmon also spent two years as the head diving coach of the Hoover Dive Club in Hoover, Ala., from 2014-16.

Sirmon previously served as the diving coach at Birmingham-Southern College in Birmingham, Ala. During his time in Birmingham, his team set every school record. In addition, Sirmon had multiple divers that were selected as conference divers of the week and had one conference Diver of the Year.

Sirmon is an alum of Trinity University in San Antonio, Texas, where he earned a Bachelor of Arts in religion. He dove two years and was a finalist in the men’s one meter at the Southern Collegiate Athletic Conference Championships. Sirmon received his Master of Fine Arts in Book Arts from the University of Alabama in Tuscaloosa.