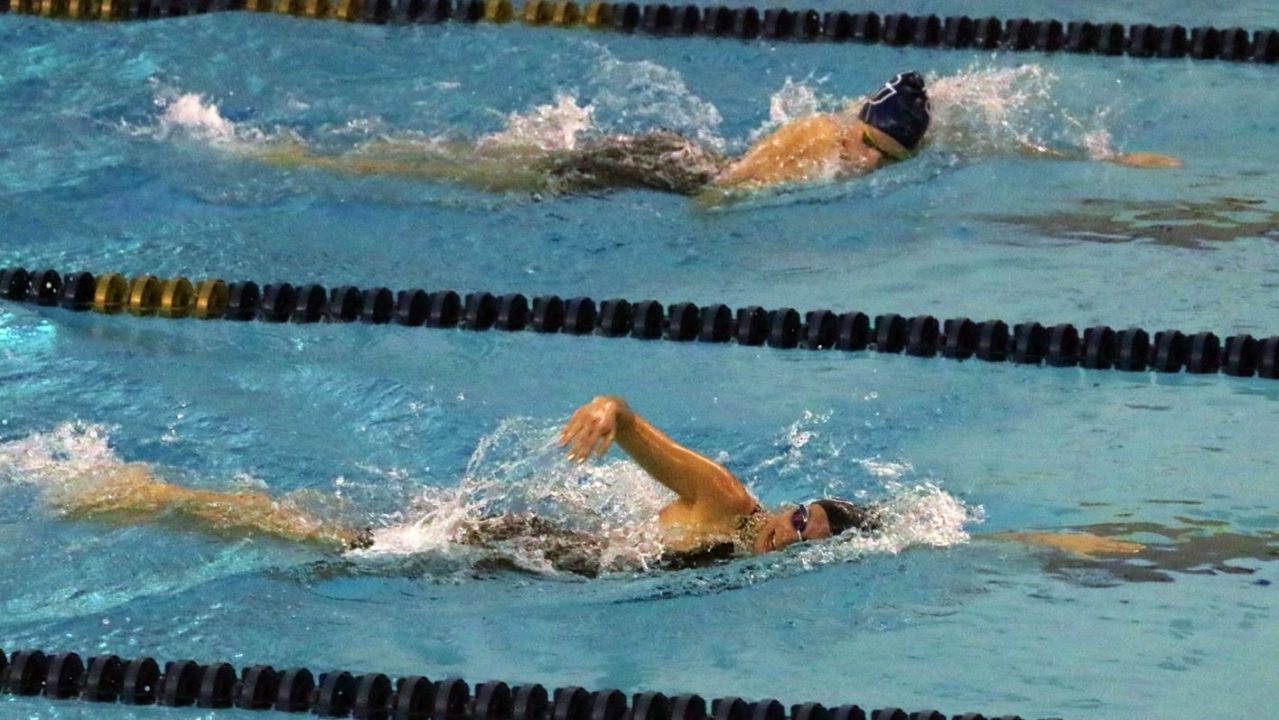 As the weekend kicked off in Akron, the Blue Streak men looked poised to stake a claim for their fourth straight league title, while the women seek a fifth. Current photo via John Carroll Athletics

Prior to this Olympic cycle, Franklin & Marshall didn’t have an Olympic Trials qualifier since Gordon Chalmers represented the U.S. at the 1932 Olympics.

Isabella Rosa commits to staying in Pennsylvania to swim collegiately, announcing that she will be joining the University of Scranton this fall.

Jeff Vitek was .21 off the DIII record in the 100 butterfly as JHU took on Gettysburg in some late-season DIII swimming action.

On Thursday night, day one at Ohio Athletic Conference Men’s Swimming & Diving Championships concluded with a familiar look. As the weekend kicked off in Akron, Ohio, at Ocasek Natatorium, the Blue Streaks looked poised to stake a claim for their fourth straight league title.

JCU tallied 250 points on day one to stay clear of a strong challenge from Mount Union (223). Ohio Northern was a distant third with 152 points.

Results from Day One (PDF)

John Carroll held the OAC record for the men’s 200 Freestyle Relay going into the finals. The Blue and Gold “A” team comprised of Adam Lenz, Forrest Campbell, Michael Heller, and Westin Fishel took first place honors for the fourth consecutive year with a breathtaking time of 1:21.74, a new OAC best record. The gold medalists finished far ahead of second place Mount Union (1:24.81).

In the second event of the night, the Blue Streaks filled the “A” 500 Free championship with five swimmers: Aidan O’Neill, Ben Rancilo, Erik Sriubas, Mason Beck and Jonah Venos. The only JCU representative to finish in the top three and thus earning All-OAC accolades was the freshman Venos. He tabbed third place, finishing with a time of 4:38.49, respectively. Beck finished in fifth (4:43.43) and O’Neill took sixth (4:43.71) both securing spots on the podium.

Senior Patrick Folan was the lone Blue Streaks swimming in the “B” final for the 500 yard freestyle.  Folan posted a second place finish with a mark of 4:47.20.

In the 200 IM, last year’s runner up, Lenz, came in projected to take first place. Lenz lived up to the expectations and snagged the first place honor with a career record time of 1:52.70.

The fastest sprinters of the night faced off for the finals of the 50 Free. Heller found himself on the podium once again by taking second place (21.11). Jackson Cooper finished third (21.22) for his second career All-OAC effort, and Fishel took fourth (21.40).

In the final event of the night, the Blue Streaks dominated for the third straight year in the 400 Medley Relay event posting an OAC record time of 3:17.73 for first place. The John Carroll “A” team  was comprised of Liam McDonnell, Campbell, Lenz and Venos, and the quartet blasted the OAC record the Blue Streaks set last year by just over two seconds.

The Blue Streaks will be back in action for day two of the OAC Championships at 10:00 am for the prelims and 6:00 pm for the finals on Friday, Feb. 14, in Akron.

The current John Carroll’s women’s swimming and diving team only knows what it feels like to leave the University of Akron in February victorious.

Every year, for the past four years, they have been crowned champions at the OAC.

For history to repeat itself, this championship mentality would have to start right off the bat at day one of the 2020 Ohio Athletic Conference Swimming and Diving Championships hosted by Baldwin Wallace at the University of Akron in Akron, Ohio.

Results From Day One (PDF)

The night began with the  ‘A’ team consisting of Olivia Talamo, Shelbi Shearer, Tori Vale, and Rachel Halapchuck taking first in the 200 Free Relay with a time of 1:37.95 to kick things off for the Blue Streaks.

In the championship round, freshman Ynyra Bohan placed second with a season’s best time of 5:13.35. Also, adding points for the Blue and Gold was Lauren Spence, finishing fifth with a time of 5:19.43.

For the 200 IM, Felice Ferrante represented the Blue Streaks in the ‘B’ finals, placing fourth with a time of 2:18.99.

All-American and defending champion of the 200 IM Gwyn Ledrick beat her time from last year, setting an OAC record with a time of 2.05.21. Monica McKie, Emily Yoos, and Katelin Avenir all contributed points for JCU placing third, fourth, and seventh, respectively.

In the 50 Free, Maddie Panus won the consolation heat with a time of 24.86, with Vale coming in third. In the championship final, Talamo took fourth, Ashley Lynch tied for fifth. Hope Scherger placed seventh and Shearer – in her fourth consecutive “A” final – took eighth.

Tomorrow, the Streaks continue their quest for championship number five. Day two of the preliminary races will start at 10:00 am with finals starting at 6:00 p.m. at the Ocasek Natatorium.

It’s great that you’re reporting on OACs and Division 3 swimming. But there’s more than just one school at the meet it wouldn’t be a conference meet if only one team was there. Not to mention, JCU only won 2 out of the 6 individual events that night. That means 4 of the individual events were won by on of the 4 other teams at the the meet. It would be nice if the other schools and athletes who had remarkable swims for and times got the recognition that they deserved.

Agreed, and I’ve seen this before on SwimSwam. If you’re going to report on a meet there should be a little more research than copy pasting one school’s press release.