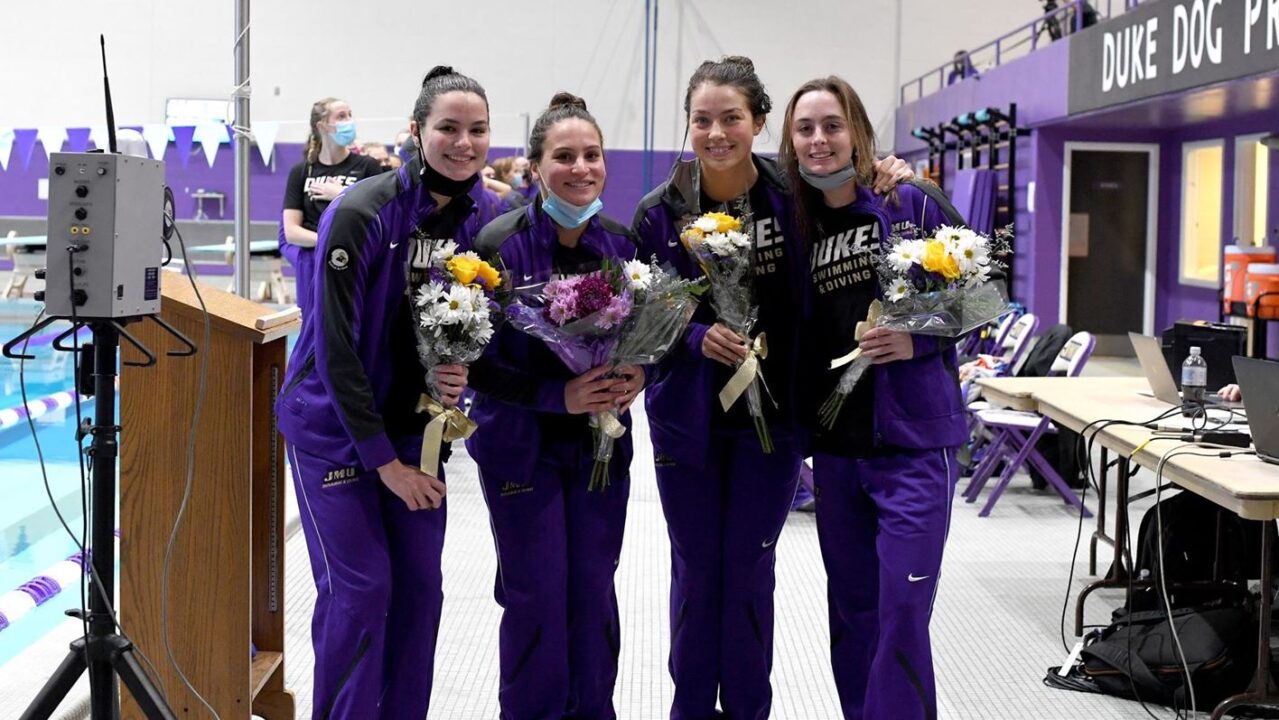 The James Madison swimming & diving team avenged their season-opening loss to Towson as they defeated the Tigers, 188-110, on Saturday afternoon. Current photo via JMU Athletics

HARRIOSNBURG, Va. – The James Madison swimming & diving team avenged their season-opening loss to Towson as they defeated the Tigers, 188-110, on Saturday afternoon as part of Senior Day at Savage Natatorium.

Quoting Head Coach Dane Pedersen
“I was really happy overall with the team’s performance today. We were down a couple people on the swimming, diving and coaching sides so we had a couple of goals of focusing on who was here and the opportunities we had. It had been a break since the last time we competed so we talked about the things and lessons we had learned throughout the first semester and all of our meets to make sure we grow in those areas and I think we did a really good job. Our main points were high energy, consistent support of cheering for one another and executing a good race strategy and we executed those areas. It was nice to send our seniors out their last home meet with a win and I just want to thank the four of them and their families for everything they’ve given in their careers and still have to give as we continue the season. I’m happy about where we are in the training process about six weeks out from our championship meet. We have more work to do but I think we are in an appropriate spot for what’s left to work on.

Up Next
The Dukes will be back in the pool on Friday, January 28 as they travel to the state’s capital to take on Richmond. Diving will begin at 2 p.m. followed by swimming at 4 p.m.

HARRISONBURG, Va. – Ending a Colonial Athletic Association (CAA) rivalry, the Towson University women’s swimming and diving program fell 188-110 Saturday afternoon at long-time rival James Madison. The meet at Savage Natatorium was the final conference meeting between programs before the the Dukes transition from the CAA. Towson and James Madison have combined to win 12 of the last 14 CAA Championships since 2008, establishing the programs among the top of the league for nearly two decades.Event winners for Towson (2-4) included Karlee Carminati in the 1,000 yard freestyle while Alyssa Largay topped the standings in the 3-meter dive. Tiffany Matulis won the 200-yard breaststroke with Hailey Ritter touching first in the 100-yard butterfly.How it Happened