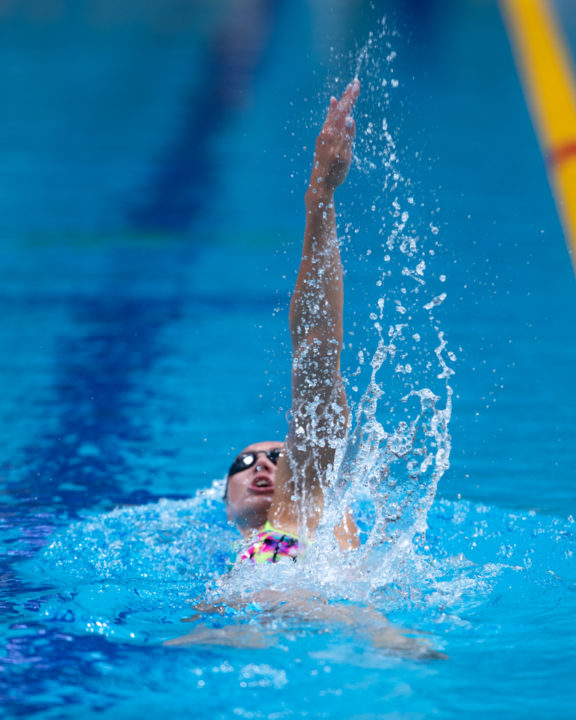 Russian backstroker Anastasia Fesikova has pulled out of her first ISL foray as a Toronto Titan due to a lingering shoulder injury. Archive photo via “Rafael/Domeyko Photography”

The inaugural season of Toronto Titans is already seeing a shake-up, as Olympic silver medalist Anastasia Fesikova of Russia has pulled out of season 2 of the International Swimming League (ISL) citing injury.

The 30-year-old backstroke ace was set to join husband Sergey Fesikov on the debut squad of Toronto Titans but says a nagging shoulder injury will be sidelining her until December.

“I will not go to ISL due to a shoulder injury. I miss all starts until December,” Fesikova said, per the All Russian Swimming Federation.

“Tearing of the biceps head, there are problems with ligaments, tendons. A doctor in Germany recommended an operation, but we decided against it as I simply would not have recovered in time for Olympic selection.

“As a result, I underwent a course of treatment, the pain became less – before that, even in everyday life I would not have raised my arm. I started to swim on my arms only two months ago. While I am crawling, I can’t swim on my back for more than 100 meters – there is more load on the shoulder area. So for now, we decided not to force the return and skip the first starts.

The 2012 Olympic Games silver medalist in the 200m back continued, “Apparently, the injury was old. Sometimes there was pain, but I rested and everything went away. But the quarantine was training only on land. There was a lot of load on the arms, which is unusual – a lot of the same push-ups, for example.

“As my coach says, the arm I would have withstood the selection in April and the Games if I had been selected and they were held this summer, but everything turned out differently. I swim, train, but so far I can not do it to the fullest.”

Fesikova plans on returning to competition at the Russian Short Course Championships slated for December.

In the meantime, her name no longer appears on the Toronto Titans roster. It would have been Fesikova’s first ISL season.

As an addition, Brazilian breaststroke Jhennifer Conceicao now appears on the Toronto lineup, making the move from LA Current from season 1. Last year, 23-year-old Conceicao earned 20.0 total points as a member of the Current, including placing 5th in the 100m breaststroke final in Las Vegas.

Below are Conceicao’s best times.