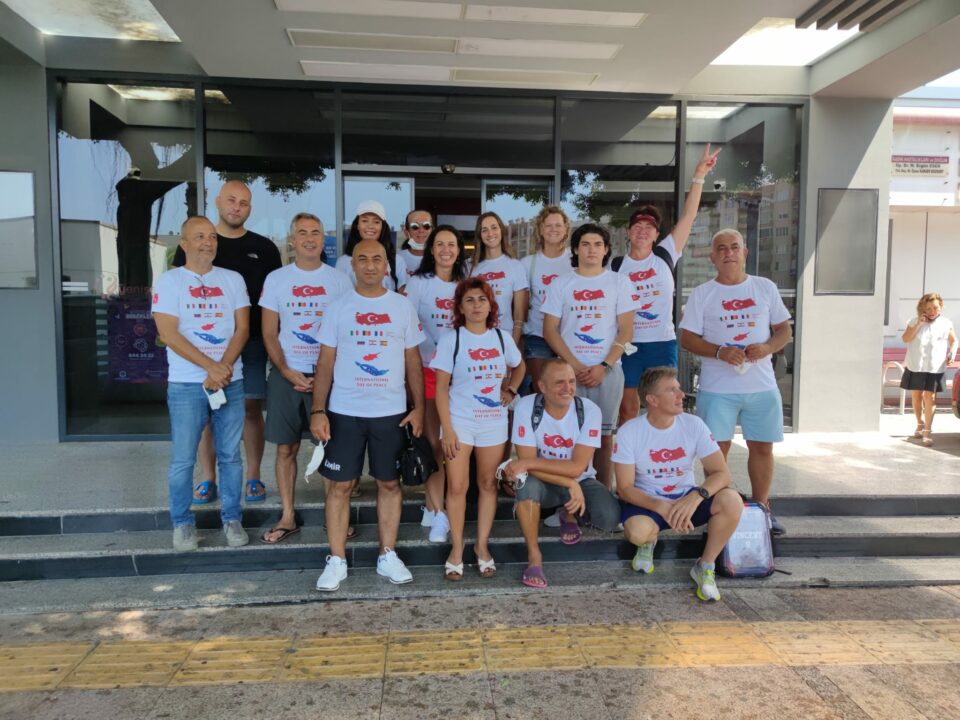 The 3rd annual Mediterranean Peace Route Swim was completed on September 1st by 11 Turkish and international swimmers in a record time of 27 hours. Current photo via Günes Kibar

At 7 am on August 31st, swimmers embarked on a 91.27km (about 56.7 miles) swim between the Republic of Turkey and the Turkish Republic of Northern Cyrpus for the third annual Mediterranean Peace Route swim.

This year was the first time the team consisted of international swimmers who represented  Turkey, France, Spain, Belgium, Russia, and the United States.

The event was organized by Dr. Günes Kibar of the Youth and Sports Club of Hacettepe Üniversitesi .

“We want to demonstrate that this sporting activity could bring every nation to be united in peace route,” Kubar told the World Open Water Swimming Association (WOWSA) in July. The message behind the event was to “swim for peace and nature.”

“It was an incredible experience, all about teamwork and boosting each other to accomplish a goal vs the typical competitive environment,” said American swimmer Lisa Pharr.

“We did not know each other at the start, but by the end, we were a family”

The team finished the route and arrived at the Girne (Kyrenia) Ancient Port on September 1st, also known as World Peace Day in Turkey. They completed it in a world record time of 27 hours (it took 37.5 hours in 2020 with 9 swimmers).

They were escorted from the starting point Tascu by a coast guard boat and swam through the night in waters about 80 degrees Fahrenheit.

The 2019 peace route swim was ranked 2nd in WOWSA’s Performance of the Year Award.