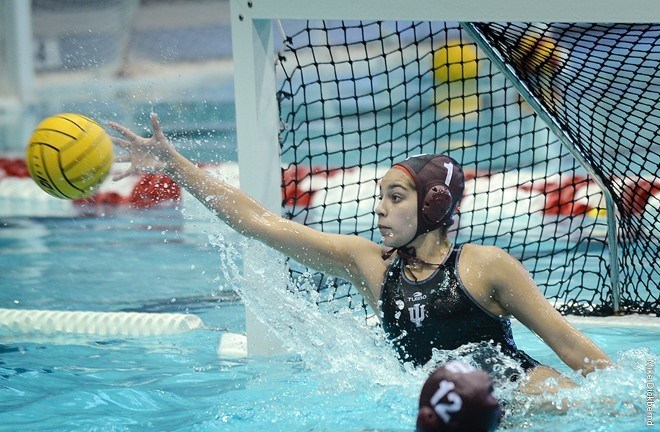 After months of anticipation, the opening day of the 2017 water polo season is within eyesight. A lot has happened... Current photo via Indiana Athletics

After months of anticipation, the opening day of the 2017 water polo season is within eyesight.

A lot has happened for Indiana’s water polo team since last season. The Hoosiers began the year with the appointment of new head coach Ryan Castle, who steps into his first collegiate head coaching position after several years as an assistant at numerous top-20 programs. Castle, alongside new assistant coach Emily Carr, has put in the work since the start of the academic year with the hope of making a smooth transition to his way of playing.

This weekend, Castle will pull back the curtain on their preseason ambitions, and he’ll have the perfect slate to give the Hoosiers a true examination in five games against teams in the preseason top 25.

“I want to first see what we can execute from what we’ve practiced, and then how much we can compete against those teams,” Castle said. “There are a lot of things we haven’t practiced, and in those phases of the game I want to see us just competing, putting pressure on the other teams, and adapting to set the team up in whichever way we can. Our top priority is to work out what we’ve been practicing and putting it into motion against other teams.”

With Castle came a massive personnel shift in the pool. The Hoosiers bring nine new players into the fold this season, including eight freshmen, one semester transfer, and the highly anticipated return of goalkeeper Jessica Gaudreault.

After two illustrious seasons with a pair of All-CWPA first team honors and a CWPA title in 2014, Gaudreault headed north to train full-time with the Canadian Women’s National Team as they prepared to qualify for the 2016 Summer Olympics. Gaudreault is back for her junior season, this time with two years of playing at the sport’s highest level under her cap.

“The good thing is that we have a lot of new players on the team,” Gaudreault said regarding Indiana’s offseason transition. “We have seven freshmen, a transfer, and I came back after two years. We have nine people coming in total who will be new to this team. That gives everything a refreshing feel.”

Just three of the eight newcomers arrived over the summer alongside Gaudreault: Megan Abarta, Kendall Doten, and Gillian Gatecliff. The trio of field players have made an instant impact on the practice tempo and competition, two factors that doubled up at the semester break.

Just a few weeks before the start of the season, another blend of Hoosiers joined the fold. Emily Powell and Mollie Williams became Castle’s first two signees and IU’s only current players from Australia. Joelle Nacouzi, who committed last spring but joined at semester, is a familiar face to junior international teammates Sarah Myers and returning All-American Kelly Matthews. Davis Simmons made the trip from Mercer Island, Washington with coach Carr to bolster the goalkeeping unit, and Riley Beemer transferred from Golden West C.C. to join IU as a sophomore.

“Competitiveness,” Gaudreault said, the one word she used to describe the new group. “It’s become much more competitive in the water with the team, and that’s how we’re going to get better in the long run.”

Although the Hoosiers lost crucial players like Mary Campbell, MacKenzie Bonk, and Candyce Schroeder to graduation, they return four-of-seven starters from last year’s team. Matthews, IU’s leading scorer with 73 goals in each of her first two seasons, will lead the attack alongside playmaker and international counterpart Sarah Myers. Karrie Kozokar and Jennifer Beadle, who became regular starters last season, combined for 75 goals, 44 assists, and 77 steals in 2016. Sarah Young, who made a crucial transition from center to a face-up position on the perimeter, broke out with 26 goals and 35 assists last year.

“We’re really excited, but obviously nerves come into play at first,” said Matthews. “For some of the players, it’ll be their first time playing a game at this level. Overall, we’re really anxious and ready to begin.”

The No. 16 Hoosiers face a comprehensive examination to start the year at the UCSB Winter Invite. It begins on Friday, January 20 at 4:10 p.m. ET against No. 25 CSU Bakersfield, followed by a game against the hosting No. 9 UC Santa Barbara Gauchos at 7:40 p.m. They’ll also meet with No. 23 CSU Northridge and No. 3 UCLA on Saturday before the concluding matchup with No. 6 Hawaii, where Castle served as associate head coach and Carr played for four seasons.

“We’ve really been focusing on the first day against UC Santa Barbara and CSU Bakersfield, trying to lock in those wins before we look down the weekend,” Gaudreault noted. “The game against Hawaii will be important since we get another shot at them later in the season. We’ll test the water against them this weekend so we’re ready for when we head out to their pool.”

Coach Castle sets the same goals for every team he coaches, regardless of how long he’s been with the team. They want to win their first game of the year; win any game against a rival opponent; make good on their conference play; and, in the long run, hoist a national championship trophy.

They have a shot to check that first box this weekend, but it will take a disciplined effort.

“One of our goals is to always win the first game of the season, so we’re setting ourselves up for that. With that being said, CSU Bakersfield is a pretty good team,” Castle said. “They’re very organized, and they only graduated a few players. Coach (Jason) Gall runs a very good system, their players know what they’re doing, and it’ll be a tough task for us to break it down. It all comes down to how we can compete.”