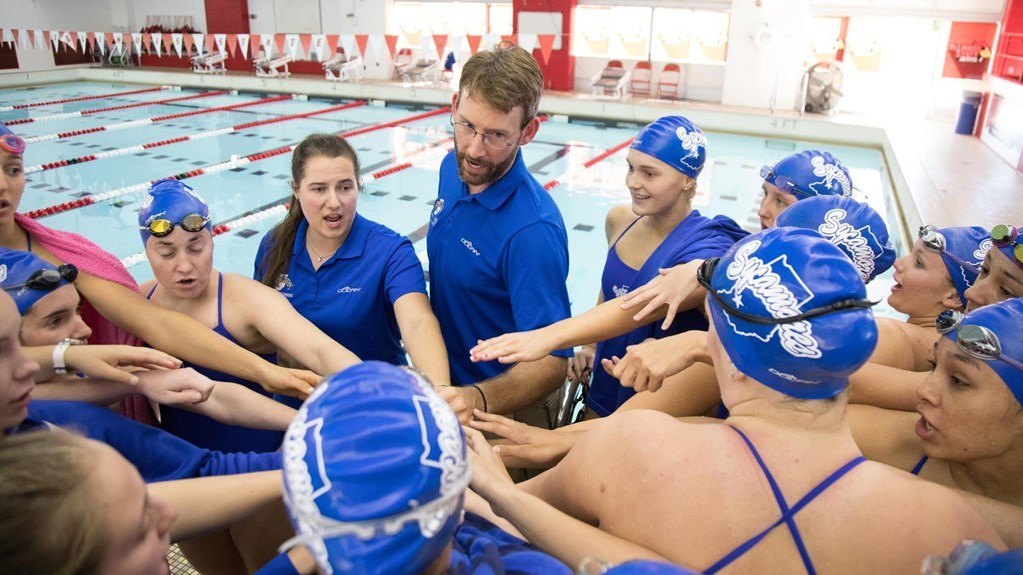 What Coach Leach is Saying:

“For us, we’re trying to continuously work on culture, so these 10 young women who are going to be coming in next year, we’re going to push them to be better people, get better grades and to push one another and cheer for one another. That’s how they’re going to get faster. I didn’t mention anything about times or winning because for us it’s about process and developing those good people every day. If they’re good in the water, if they’re good in the classroom, if they’re good out in the community, then they will be successful as far as results are concerned. This class, along with our returners is going to be a lot of fun next year and I’m really looking forward to it. I know the girls already love these 10 people coming in and so we want to make sure that we are continuously growing our brand, our culture and setting the foundation for future classes to be able to look up to and strive to beat. This is going to be a lot of fun. Go Sycamores.”

Mansker comes to Indiana State from San Antonio, Texas where she attended Smithson Valley High School. In high school, Mansker competed in the backstroke, butterfly and freestyle events and was also named the team captain for 2017-18. She was a Texas state finalist in the 50 freestyle in 2018 and is the three-time District Female Swimmer of the Year. Mansker also competed in club swimming for the Alamo Area Aquatics Association where she was a four-time Speedo sectionals qualifier, three-time Speedo futures qualifier and a 2018 NCSA summer qualifier. Caitie is the daughter of Clint and Toni Mansker and has one brother, Cole. She plans on majoring in biology when she arrives on campus.

Coach Leach on Mansker: “Caitie Mansker is going to be the surprise for a lot of people in our conference, and our team. I think she comes from a really strong club team and has a really strong swimming background. With the right group of training, with our mid-distance and sprint groups, she’s going to really take off. We just need to be able to facilitate just a couple tweaks here and there on her technique so we can keep moving her up the ladder. She’s a really good pickup and I think she’s going to have a great year with all the other incoming freshmen and will definitely be someone to watch.”

Montgomery comes to Indiana State from Shelbyville, Ind., where she attended Greenfield Central High School. While in high school, Montgomery competed in the one-meter springboard and was a member of three sectional championship teams and four conference championship teams. She also was an individual conference champion as well as a state qualifier for two consecutive years. Maci is the daughter of Timothy Charles Wetter Sr. and Anna Kay Montgomery and also has five siblings: Justin, Taylor, T.J., Andrew and Kristian. When she arrives at Indiana State this fall she plans on majoring in computer science.

Coach Leach on Montgomery: “Maci from Indiana is going to come right in and help us define our diving core, as we kind of retool our diving group. She’s very athletic, the girls already love her and she’s a very outgoing person. I think she’s going to work very well with coach Chen as she continues to strengthen her one-meter experience and start developing her three-meter and platform diving list. We’re excited to see her continue to grow and learn as she develops through our program and hopefully we’ll see how she continues to help our diving core expand as we bring in other solid classes behind her.”

Nasiou joins the Sycamore family all the way from Heraklion, Greece where she attended Geniko Lykeio Gaziou Public High School. In high school, Nasiou competed in the breaststroke and was the 100 breaststroke champion at the 2018 national school championship. She is also a two-time national champion and has been a member of the Greek national team for five years. Nasiou also swam for Nautical Sports Club of Glyfada. Anna Maria is the daughter of Dimitrios Nasios and Maria Aeraki and she is currently undecided on an academic major.

Coach Leach on Nasiou: “Anna Maria comes from Greece and is one of our biggest pickups. She’s a strong breastroker in the 50, 100 and 200 breaststroke, so she really adds depth right away. She comes in at the top of the conference and so for us it’s about finding people like Anna Maria to help grow, not only our pool strength for the breaststrokes which we haven’t necessarily had the best depth with, but I think she’s going to come in and really turn heads from day one.”

Webb comes to Indiana State from Edwardsville, Ill., where she attended Edwardsville High School. At Edwardsville, Webb also ran cross country and for swimming competed in backstroke, freestyle and individual medley events. She was a member of the sectional championship team for four consecutive years, and as a member of her club team, YMCA Breakers, was named the Swimmer of the Year and a made the YMCA Breakers national team. Emily is the daughter of Darren Webb and Debra Boots and has five siblings: Tristan, Haley, Tessa, Carley and Jack. She plans on majoring in nursing when school begins in the fall.

Coach Leach on Webb: “Emily Webb has been nothing but a great person to recruit and she’s going to come in and add culture to our program. She’s very outgoing once you get her out of her shell, so the biggest thing for Emily that we’re looking forward to is having her come in and not only push herself, but the teammates that she’s going to have here. I think that once she gets into the right training group she’s going to continuously get faster and so one of the things that we’re going to work with her on is developing and working on little things so she can continue to take off in our program.”

What the Coaches are Saying:

“We are so excited to welcome these six families into our Sycamore Family! Not only do we have strong athletes, erudite students, but also amazing people. As the third recruiting class in program history and the first for our young diving program, we couldn’t be happier with the future. These young women will all be very helpful in solidifying our culture, elevating our academics and continuing the development of the Sycamore Program. Again, we would like to welcome the Baptiste Family, Jenkins Family, Sinks Family, Rusznak Family, Christie Family and the Shelton Family,” said head coach Matt Leach.

“We are all excited that we got three divers signed for 2018. We put a lot of effort on recruiting this year. When these three stepped on campus we knew they were all great people who came from great families, along with being successful athletes. As the diving coach, I know they will be great additions and can help develop our young program. I can’t wait to work with them and I’m looking forward to seeing what the future holds,” said diving coach Fengting Chen.

Baptiste comes to Indiana State all the way from her hometown of Pretoria, South Africa where she attends Cornwall Hill College. Baptiste currently competes in IM, backstroke, butterfly and freestyle events. She has been named swimmer of the year for her school for five years as well as being named team captain. Baptiste also competed in club swimming for the Players Swim Club Pretoria. Taneal is the daughter of Mark and Jackie Baptiste and has one sibling, Kira. She is currently undecided on an academic major.

Christie comes to Indiana State from Ballwin, Mo. where she attends Lafayette High School. During her high school career Christie competed in the one meter dive where she was a 2017 state champion, named all state, all conference, and holds a school record. Christie competed in club diving for the Clayton Diving Alliance. Elle is the daughter of Scott and Lara Christie and has one sibling, Alec. She is currently undecided on an academic major.

Jenkins comes to Indiana State from South Bend, Ind. where she attends St. Joseph High School. Jenkins earned All-City and was a sectional champion in the 100 backstroke during her high school career. Jenkins swam club for the Michian Stars where mostly in backstroke and freestyle events competed. Ashley is the daughter of John and Kristine Jenkins and has one sibling, Courtney. She plans to major in nursing.

Rusznak joins the Sycamore family from Centerville, Ind. where she attends Centerville Senior High School. During her high school career Rusznak was a top six placement at sectionals in 2016 and 2017, as well as a regional qualifier in 2017. Jolie competed in club diving for the Indiana International School of Diving where she recorded a top score of 211.6. Jolie is the daughter of Jason and Jodie Rusznak and has three siblings Jace, Jarett and Jennings. She plans to major in nursing.

Shelton joins the Sycamore family from Noblesville, Ind. where she attends Lapel High School. During her high school career Shelton competed in the one meter dive while also participating in cross country and track and field. Keara competed in club diving for Fishers Diving where she was a National Team Member competing at the AAU Nationals. Keara is the daughter of Brian and Michelle Shelton and has one sibling, Kyle. She plans to major in psychology.

Sinks comes to Indiana State from Sherman, Ill. where she attends Williamsville High School. Sinks is a four time state qualifier and sectional champion in the 100 butterfly and 100 backstroke.  Ashleigh swam club for the Springfield YMCA Swim Team (SPY-IL). During her time with SPY-IL Sinks was a five time YMCA Illinois State Large Team Champion as well as a member of the National Team since 2015. Ashleigh is the daughter of Michael and Kahra Sinks and has two siblings, Lauren and Nicole. She plans to major in Physical Therapy.