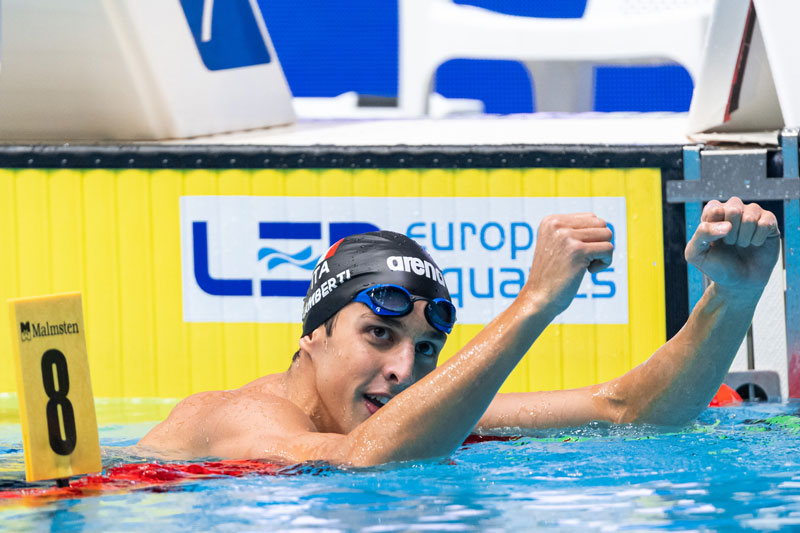 After more than 20 eyes the name Lamberti was again announced during an international event at the European Short Course Championship in Kazan. Current photo via Giorgio Scala Deepbluemedia

The logo of Team Venetto, depicting Giorgio Lamberti – who was never even a part of the team, nor was he born in the region.

When I first put on the team cap for Team Veneto, the home team in the region I come from, I asked my coach who was the man who is celebrating in the logo. He said “Well, nobody can say it out loud, but everyone knows it’s Giorgio.” Something like “Mister Logo,” aka Jerry West for NBA.

Giorgio for me is a logo. It is a symbol. He is the man with the arms lifted after the world record that my team has chosen to represent his philosophy. I think this may be enough to understand what Giorgio Lamberti did for the Italian swimming movement, but I want to tell you more.

Ten years is a long time for a World Record, even more so when we consider the technology they had in the 1980s.

But Giorgio did more than just that one swim. He was the first Italian swimmer to win a gold in a World Championship at Perth in 1991, when he won the 200 free (and also took bronze in the 100 free).

A true legend. I remember my legs shaking when I first met him on the pool deck.

But what if this legend is also your coach? What if that legend is both your coach and your dad?

During the second day of racing, Michele earned a place on 3 different medal podiums in less than 1 hour.

First, he swam the 50 back and set the new national record in 22.62 and took the silver behind Kliment Kolesnikov. Then, just 30 minutes later, he took another silver in the 100 fly, with the time at 49.79.

But this was not the end. In the 4×50 mixed relay Michele and the other 3 Italians won gold and set the new World Record.

Do you know what the icing on the cake was? It was Michele’s birthday.

Sure it’s easy to say “Like father, like son”, or “The apple doesn’t fall far from the tree”, but Michele is a different athlete with different goals and a different way to run across by his own. We all hope he can reach as much success as his father, who is also his coach, but why not? maybe he can do even better.

And let’s not forget that Giorgio also has two other children, Matteo and Noemi, both swimmers, and the dynasty could continue.