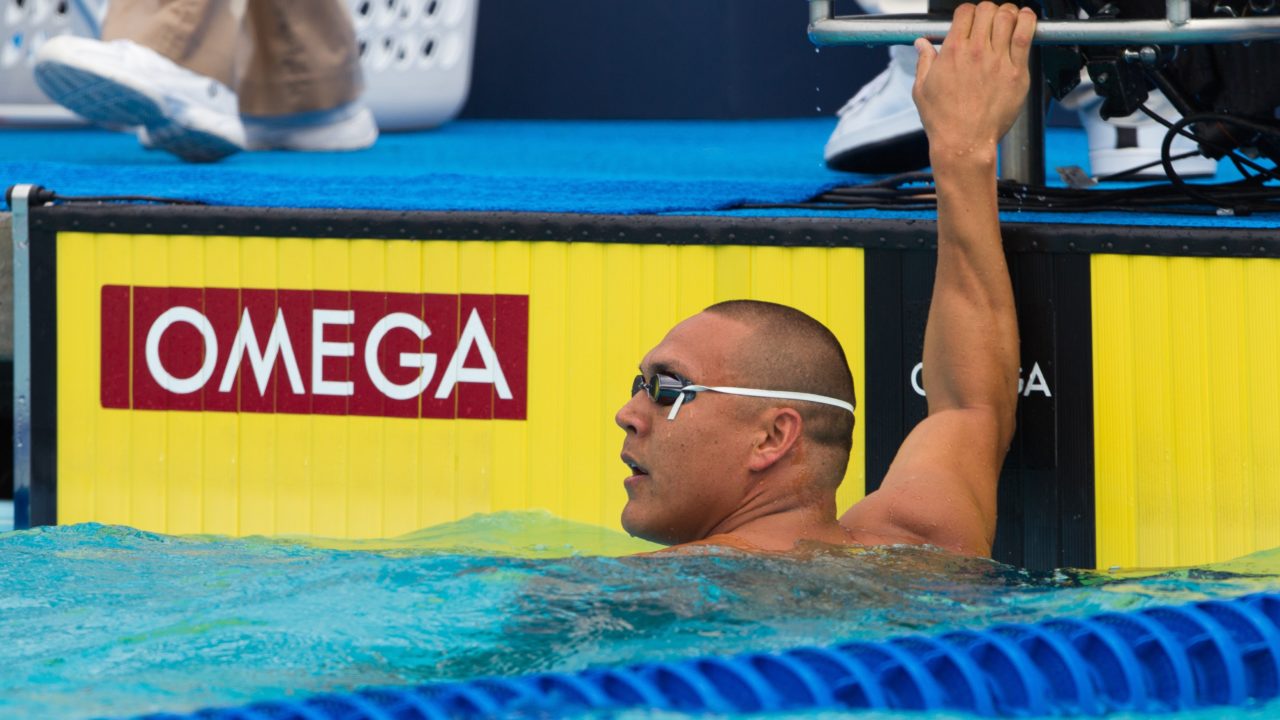 Former world record holder and multiple Olympic medalist Geoff Heugill will be in court, along side his wife Sarah, in Waverly on May 14th facing a charge of possessing an illicit drug... Current photo via Tim Binning/TheSwimPictures.com

Former world record holder and multiple Olympic medalist Geoff Huegill will be in court, along side his wife Sarah, in Waverly on May 14th facing a charge of possessing an illicit drug.

According to the MailOnline while attending The Champagne Stakes at the Royal Randwick race track the couple were seen by the race track security entering a disabled washroom where they spent an unsual amount of time. When returning to a suite, where they were guests, police confronted the couple questioning them and ultimately finding what is to believed to be a small bag of cocaine.

“Police were patrolling Randwick Racecourse as part of their normal duties,” a NSW police spokesman told the MailOnline.

‘They were directed to a suite in the grandstand by security guards where a 35-year-old man and a 30-year-old woman were allegedly found with a small quantity of white powder, believed to be cocaine.”

‘They were issued with a field court attendance notice for the offence of possessing an illegal drug.”

Today Huegill came out and publicly apologized for creating a feeling of disappointment in many peoples’ minds, but since the matter is now in the courts he will not speak about the event any further.

“I realise that this has caused some commotion,” he told reporters this afternoon.

“Some people feel that they have been let down and I deeply apologize for that. But I would ask everyone to understand that this matter is before the courts I won’t be making anymore other statements until the matter has been resolved.”

‘Thank you very much and we will speak to you again soon.”

The incident will not only affect his personal life, where the couple have two young children, but it has already affected his the businesses in which is involved and could even jeopardize the relationship that sponsors have with Swimming Australia.

Huegill was an integral part of a sponsorship deal that Swisse Vitamins struck with Swimming Australia, a contract that will end in May. Although the company said that they had already told Swimming Australia they were not renewing their contract, this could affect any chance that the national governing body would have in convincing the company to negotiate future sponsorship.

“We notified Swimming Australia several weeks ago that we would not be renewing our partnership when the contract expired at the end of May,” told the Bangkok Post Swisse CEO Radek Sali.

Another relationship that will end for Huegill is his association with Austswim, which is the country’s primary water safety organization. Huegill has been an ambassador for the organization for the last decade.

“At the moment we’ve suspended his activities for us, pending the outcome of further legal outcomes,” Gordon Mallet the CEO of Austswim told MailOnline.

‘The alleged incident is out of character, but Austswim has zero tolerance and we’ve suspended the relationship to let natural justice take its course.”

A number of years ago Huegill admitted that once retiring from swimming he fell into a depression and used drugs to help him get over the fact that he no longer competed in the sport. In recent months this has become a hot topic in Australia and across the world since Ian Thorpe and Grant Hackett are currently struggling with similarly issues in their post swimming lives.

wow.. wish him the best

My heart goes out to the guy. He made a bad decision that is going to cost him a lot. But his story isn’t unusual amongst the elite swimmers I have known. Swimswam should do a story of how easy it is to take your dedication, discipline, and tolerance for pain and point that in the wrong direction. I’ve seen so many swimmers who turn to “over-partying” once competitive swimming goes away. There is something scary about the similar mentality it takes to beat yourself up with alcohol and drugs as you would beat yourself up with a challenging swim set. How many of us have heard fellow swimmers brag about their hangovers and overcoming them like they were telling… Read more »

I could not agree more with what itsnotbreaststrokeanymore posted. As a former swimmer in college, I could totally identify with what he said. There was a clear connection for me between “taking it to the limits” athletically and then “taking it to the limit” socially at the bar once swimming was no longer a focus. I myself gave up drinking a little over a year and a half ago after 10 years of reckless drinking. Glad to see a post like yours that identifies this issue for what it is.