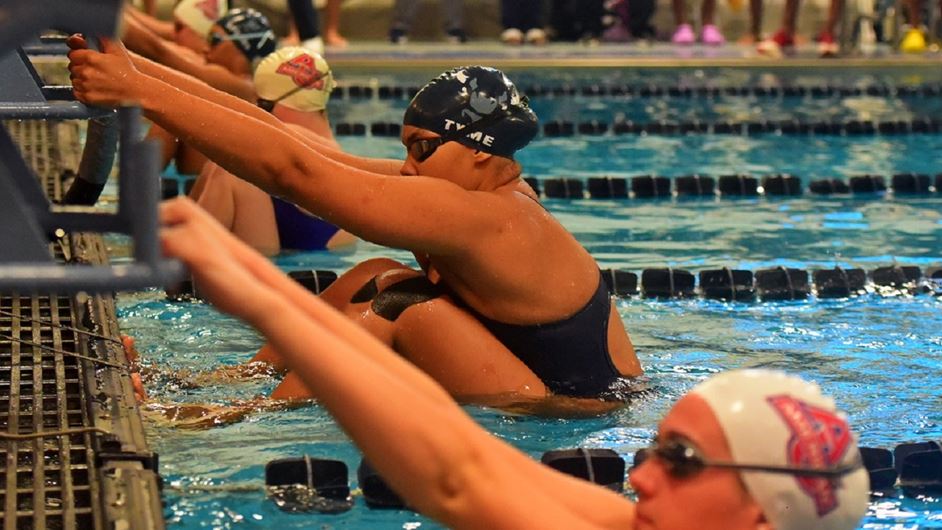 Howard University edged out Virginia Military Institute (VMI), 153-143 on the women's side and downed the Keydet men 179-107. Current photo via Mark Coleman

With the victory, HU improved to 2-1 in dual competition while winning back-to-back meets since January 2020.

Howard won 10 races on the afternoon, including a pair of relays.

Individually, the Atlanta product claimed first in the 200 Breast (2:10.65), eighth-fastest in program history.

HU opened the day with a win in the 400 Medley Relay, led by Beckles, Simon and rookies Brenton Cooper (Baton Rouge, La.) and Darin Johnson (Atascocita, Texas), producing a 3:30.26 time.

Cooper also earned gold individually in the 50 Free with a 22.70 mark.

Freshman Cyrus Gibson (Ocala, Fla.) also competed in the 1000 Free where he etched his name in the school record book, recording the ninth-best mark (10:22.89).

Other notable performance in the pool included junior Reese Samuel (Pittsburgh) winning the 200 Fly (1:59.08) with the seventh-fastest time in school history.

On the board, newcomer Isaiah Swilley (Bourbonnais, Ill.) finished first in the 1-meter dive, scoring 240.10 points.

HU grabbed over a dozen victories on the afternoon, including a pair of wins in the relay events.

Rookie Zaylie-Elizabeth Thompson (Nassau, Bahamas) etched herself in the record books, producing the fifth-fastest in school history (11:12.02). In the 200 IM, the Bahamas native won with a 2:19.02 mark.

Other notable performances in the pool included sophomore Aaliyah Young (Burleson, Texas) winning the 50 Free event (26.31) and fellow classmate Alana Josey (York, Pa.) recording the third-fastest mark in school history with a victory in the 200 Fly (2:11.93).

On the board, junior Teyana Johnson (San Antonio) placed first in the 1-meter dive with a 200.15 score.

LEXINGTON, Va. – The VMI men’s and women’s swimming and diving teams hosted their first home meet of the 2021-22 season Saturday against visiting Howard University, but fell in both men’s (153-143) and women’s competition (179-107) from Clark King Pool.

The men’s half of the meet came down to the final race, the 400 free relay, with VMI trailing just 140-139. A Bison team won the race to clinch the meet victory.

VMI travels to UMBC next Saturday at 1 p.m.