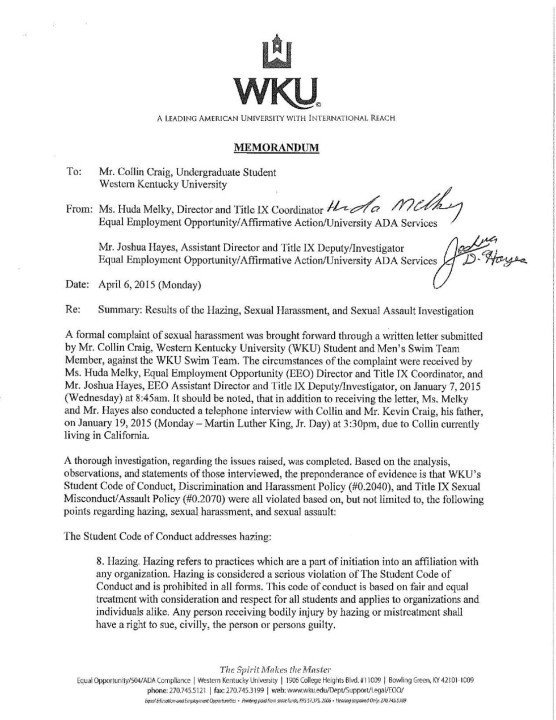 A Title IX investigation has led to findings of sexual harassment, sexual assault and hazing against the Western Kentucky University swim team. Current photo via Courtesy of WKU Herald

Accusations of hazing, sexual harassment and sexual assault are being made against the Western Kentucky University (WKU) swim team, per a report just released by the WKU Herald. Investigations were made when former swim team member Collin Craig filed a formal complaint in January 2015 with the Bowling Green Police Department.

According to the Herald‘s reporting, Title IX investigators Huda Melky and Joshua Hayes discovered that “individual members of the team were pressured to drink underage, subjected to calisthenics – called the “freshman ‘f*ck around’” and endured mental abuse brought around by “taping and replaying embarrassing or compromising activity in order to subject the individual to ridicule.” The investigators also found that alcohol was offered to and accepted by high school recruits.

Additionally, the investigators determined that swim team head coach Bruce Marchionda “knew about the hazing and sexual harassment since spring 2012 based on an email he received from a former swimmer.” Further, Melky and Hayes found that subsequent discipline associated with such behaviors was “often inconsistent” and with convenient timing so as to not impact major competitions or championship meets.

We will report additional information on this ongoing situation as it becomes available.

Oh come on. This kind of stuff isn’t new. It’s sad that all it takes is one kid who’s too sensitive to ruin a program. Looks like he wasn’t planning on swimming at any other college either. No way I’d want a kid like that on my team.

ya…. that is the appropriate response.

Vote Up00Vote Down Reply
So tru

Its so true though. Hundreds of kids have all done it. Then comes one kid who’s too sensitive to ruin it all.

Wrong. Hazing is an unacceptable for ANY swim program, period. “That kid” would not have any complaint, and the program would not be “brought down” if there had been no hazing.

Just treat your team members like you value them as team members and make sure they all do the same for each other. Simple. This isn’t rocket science.

Yeah Andrew – it’s crap that you can”t sexually harass in the name of team bonding.

except he’s my team mate, and obviously, from details, its a too much for everyone, not just him

You are a good friend and teammate.

As a parent of a future D1 swimmer, we’ll take Western Kentucky off our list. I hate hearing that the Head Coach knew, and ignored it. We have met a couple dozen coaches so far, and can’t imagine that any would condone that. The drinking happens everywhere, I’m sure, but ridiculing should end in junior high. Team should have one goal.

Contrary to what you may believe, having spoken to and seen many swimming programs, hazing is indeed prevalent at many universities, big and small. I understand that the act of hazing can be very serious however many teams, fully knowing this, still do it to “team build.”

Ya I hate to tell you this but every group in college hazes its new members one way or another. Some take it too far but if your worried about your kid getting his feelings hurt or being uncomfortable I suggest you just keep him at home.

Stating what I see as obvious, “college sprinter” seems to have waited until this story has been knocked back far enough to the point he felt he could safely leave a comment without reprisal.

The facts of this situation go beyond a “kid getting his feelings hurt” or “being uncomfortable”.

College isn’t a free pass to do what those upperclassmen did. Hazing isn’t team bonding. It’s about people having control over others.

If a coach and the upperclassmen are doing their jobs right, they are building their incoming freshman to be the best SWIMMER, COMPETITOR, TEAMMATE, they can be.

The term hazing is vague. Fetching kickboards and pulling lane lines or whatever isn’t the issue.

Pulling passed out girls underwear down and snapping photos and drawing racing terms on people’s faces is.

If you think that’s OK, we’ve nothing to discuss.

Too bad that a picture of a girl with her underwear down does not support the inference that a swim team member (or anyone else besides her for that matter) pulled them down. I heard no one in the history of the world has ever passed while using/attempting to use the toilet. If you believe that, I’ve got a bridge in Brooklyn I’d like to sell you. I am not defending the posting of the picture on the board or any racial epithets in any of the pictures. All I am saying is that capturing a situation with a camera does not mean the photographer and/or photograph owner created the situation.

As a WKU Swimming alum, I can assure you that Bruce Marchionda and Coach Powell are two of the greatest coaches I have ever swam with. I swam for 17 years and Bruce got my swimming career back on track. He always punished accordingly and was ALWAYS there for his swimmers. He never took swimmers troubles lightly and would fight for his swimmers as he treated them like his own sons and daughter. Try not to be too quick to judge on this one. Only so many people actually know the tradition and family-like culture this team represents and still carries today.

where was he for him?

I totally agree. People need to consider what their reaction would be if it was a female swimmer/college student or a female high school student/potential recruit who had reported this. Would the poster be having the same reaction if it was his or her sister this happened to?

Time for some people to grow up. The kid who reported this did the right thing.