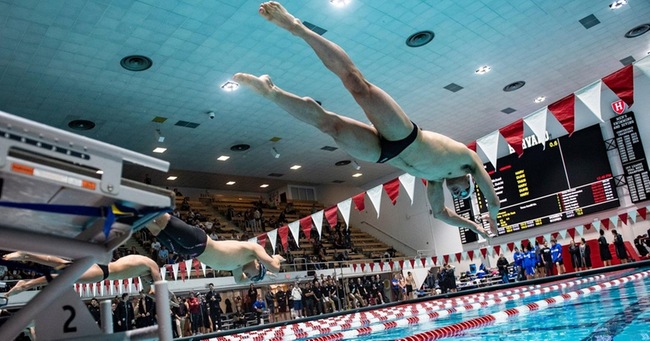 Dartmouth ended the meet by coming in third place in the 400 free relay (3:06.44). The relay left over two seconds between it and Cornell in fourth.

The Green will compete in the Big Al Invitational at Princeton from Dec. 6-8.

HANOVER, N.H. – The Cornell men’s swimming and diving team extended its win streak over Dartmouth to six meets, defeating the Big Green, 166.50-133.50, before falling to Harvard, 185-113, on Saturday afternoon at the Karl Michael Pool in Hanover, N.H.

The Big Red proved that strength comes in numbers, as Cornell had at least two, top-five finishers in six of the 16 possible events. In total, the Big Red tallied 22 top-five finishes on the day, propelling them to their sixth-straight victory over Dartmouth.

John Mahoney, Paige daCosta, and Brett Hébert paced the Big Red, each recording an individual event win. Mahoney continues to be a face of consistency for Cornell in the freestyle events, as he placed first in the 50-yard freestyle in 20.82. Ian Mackey (21.70) and Ricardo Martinez (22.11) finished not far behind Mahoney, touching the wall fourth and fifth, respectively.

Mahoney was also Cornell’s top finisher in the 100-yard freestyle, touching the wall second in 46.36. Hunter Hitchens was the Big Red’s other top-five finisher in the event, placing fifth in 47.83.

Freshman Paige daCosta is establishing himself as a vital member of the Big Red squad, emerging victorious in the 200-yard IM with a time of 1:51.67 and placing second in the 200-yard backstroke in 1:49.24. Fellow freshmen Ryan Pirrung (1:56.79) and Jack Valiquette (1:57.73) posted strong finishes in the 200-yard IM as well, placing third and fifth, respectively.

Mahoney and daCosta didn’t stop there, however, as they helped Cornell capture two solid finishes in the relay events. In the 200-yard medley relay, the pair teamed up with Ryan Brown and Jacob Mullin to guide the squad to a second place finish in 1:32.87. In the 400-yard freestyle relay, Mahoney was joined by Min Zhi Chua, Hitchens, and James Huang, as the group went on to place fourth with a time of 3:08.90.

The Big Red men’s swimming and diving team will return to the pool next week when it competes against Penn and Princeton on Saturday, Nov. 23 at 12 p.m. in Princeton, N.J.

Harvard’s 200 medley relay of Will Grant, Daniel Chang, Umitcan Gures and Mahlon Reihman finished ahead of the pack with a time of 1:30.47. Their effort tied the pool record originally set by Crimson alums Koya Osada, Shane McNamara, Steven Tan and Paul O’Hara in 2016.

Grant set a facility record in the 200 back when he finished in 1:46.48 to take first place. The first-year outpaced the field by nearly three seconds, touching the pad ahead of second-place finisher Paige Dacosta of Cornell (1:49.24).

The third and final pool record occurred in the 100 fly when Gures clocked in at 48.17, to claim first place. The sophomore, who beat the competition by more than one second, erased the old pool record originally held by Harvard’s Dean Farris in 2016 (48.43).

Next Up
Harvard will return to action on Friday, Nov. 22, when it competes against Columbia in New York. The meet is set to begin at 5 p.m.