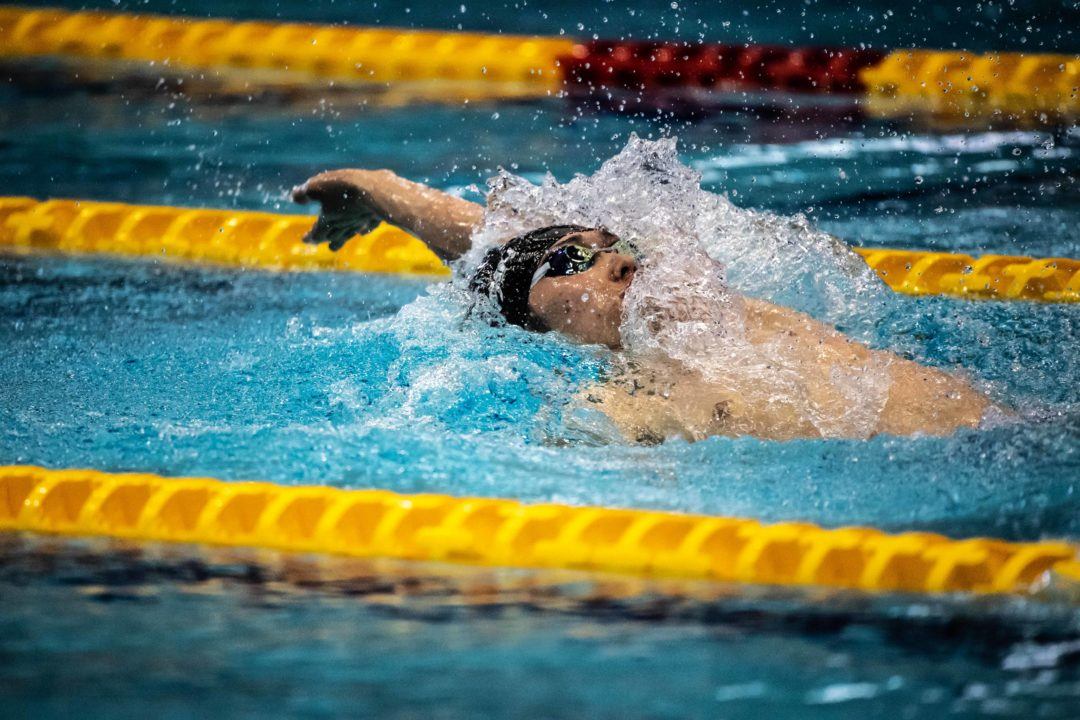 Comeback kid Kosuke Hagino is making strides in several events, including the 200m back tonight where he posted his quickest time in 2 years. Archive photo via Mike Lewis/Ola Vista Photography

25-year-old Olympic gold medalist Kosuke Hagino put up his fastest 200m backstroke performance in years tonight in Shizuoka. The Bridgestone athlete fired off a winning effort of 1:57.96 to take the gold, splitting 57.87/1:00.09 in the process competing at the 2nd Japanese Amateur Championships.

Although not entirely considered an ‘off-event’ for this versatile star who swims everything from the IMs to the mid-distance freesytles, the 200m back is not something Hgino races frequently. However, he holds a personal best mark of 1:54.23 from 2014, a time that renders him the 2nd best Japanese performer of all-time.

More recently, he produced a time of 1:57.77 to take 4th place at the 2017 World University Games. As such, his time tonight of 1:57.96 is a solid indicator of where this comeback kid is at with his prime 200m IM event coming up tomorrow.

World Championships silver medalist in the 200m free, Katsuhiro Matsumoto, topped the podium in 2 events tonight at the Fuji Pool, with just 15 minutes in between. The 22-year-old first won the 1500m free in a time of 15:31.90, taking down the previous meet record of 15:41.78 in the process.

Next up was his main 200m free event, where the man produced a winning effort of 1:46.51. Splits for his swim include 50.97/55.54 to give him the edge this evening. For perspective, his World Championships silver in Gwangju came courtesy of his 1:45.22 national record-setting swim.

Post-race, Matsumoto told Asian media that he specifically wanted to take on the tough double, as he hopes to race multiple events in Tokyo next year at the Olympics, most of which will provide little rest schedule-wise.

Additional winners on the night included Olympic silver medalist Masato Sakai looking solid in the 200m fly, posting 1:57.82 for the win That shaved .10 off of the old mete record and got him to the wall just .05 ahead of Yuya Yajima.

Yoshiki Yamanaka busted out a sub-minute time in the men’s 100m breaststroke getting the job done for gold in 59.63 for a new meet record.

Did Matsumoto say it was easy? I doubt he thought it was “easy”!