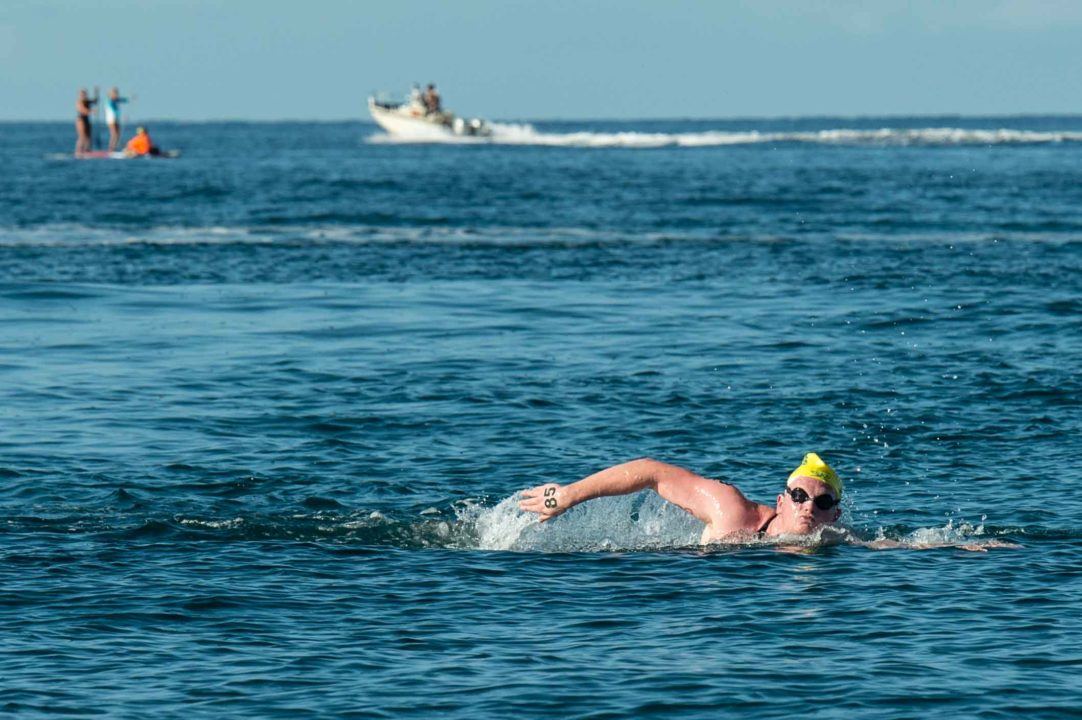 Olympian Jarrod Poort was among the competitors at yesterday's 10k open water race at Australian National Championships, along with the Gobecka sisters and Brazier siblings. Archive photo via Mike Lewis/Ola Vista Photography

It was a family affair at the 2017 Australian National Open Water Championships, as two sets of siblings finished with the top 4 of the men’s and women’s 10k ocean race. Competing at Brighton Beach, Adelaide yesterday, sisters Chelsea and Chloe Gubecka, as well as Jack Brazier and sister Mackenzie, have all qualified to compete at the 2017 FINA 10k World Cup in Abu Dhabi in the hopes of making the open water roster for the upcoming FINA World Championships set for Budapest Hungary.

Elder sister Chelsea Gubecka, 18, who competed at the 2016 Olympic Games in open water, outright won the women’s 10k event, finishing first in a time of 2:06.33.00. Excluding Japanese competitors Yukimi Moriyama (2:07.25.50) and Minami Niikura (2:07.56.70) who finished in 2nd and 4th places, respectively, the additional 3 Aussie competitors to move on include Kareena Lee along with the aforementioned Chloe and Mackenzie. Of note, Chloe is just 14 years of age, while Mackenzie is 15.

The men’s 10k race saw Canadian Eric Hedlin slap the finish line first in a mark of 1:55.01.30, but gutsy Olympian Jarrod Poort was the first place Australian, touching in 1:57.48.30 to move on to Abu Dhabi. Brazier, just 17 years of age, finished exactly a second behind, while Kai Edwards and Lachlan Colquhoun represent the other 2 Australian men to finish in the top 4.

The competitors are set to take on the 5k event on Sunday, which offers straight selection to the Australian World Championships team.

I remember a pic of the Gubeckas at the pool with their dad about 6 years ago . A family that loved the swimming thing & proud to do 11 sessions a week . This is very special .Congrats to the Gubeckas & Kawana & Mountain Creek for providing the retro mileage training .

Olde School catsuit & $10 goggles ( surprisingly good) no cap , no fancy equipment , a ( luckily ) non working pace clock & best of all ,no lap swimmers in the lane . Full retro . It was great & I bought a jelly python at the kiosk.