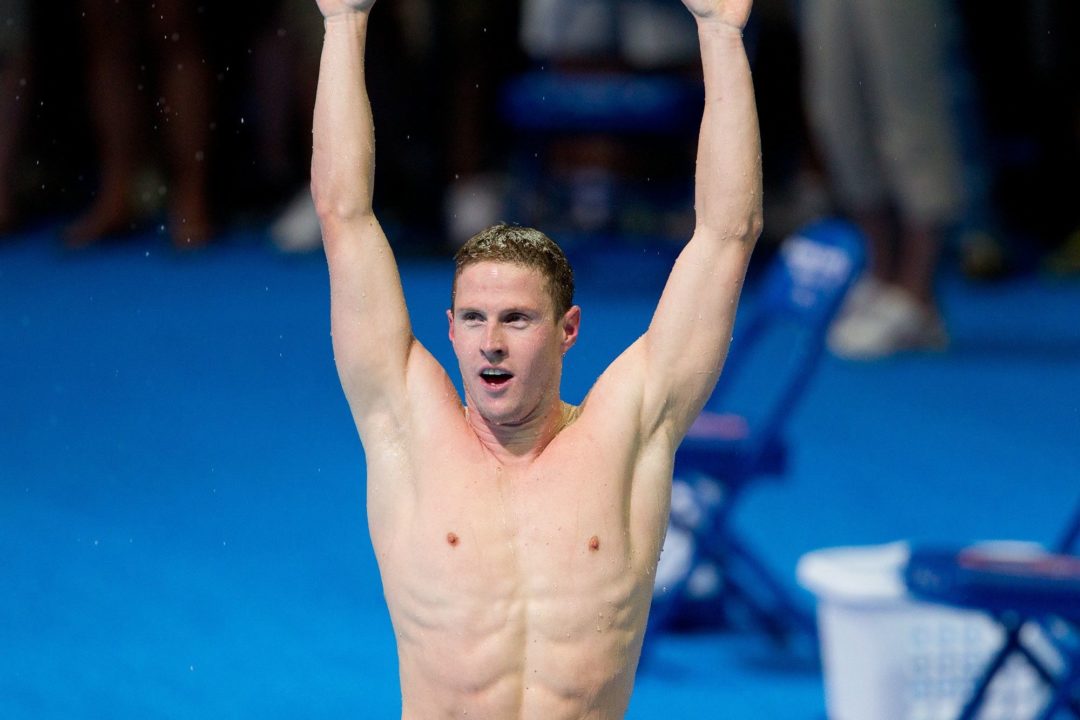 “Great Scott” as defined by several different sources, is an exclamation of surprise, amazement or dismay. There are two possible...

Scott Weltz and coach Peter Motekaitis are proud AGGIE men! They wear the shirts of yet another D1 cut program to honor the men who did not finish their UCD careers…

“Great Scott” as defined by several different sources, is an exclamation of surprise, amazement or dismay. There are two possible theories for the origin of this phrase. One theory is that this term arose from the American Civil War commander in chief of the US Army, General Winfield Scott; a second idea is through the translation of the German phrase “Gruess Gott” which literally means Great God – gott having a similar rhyming sound to scott.

No matter how we define “Great Scott”, one thing is for certain…on Friday, June 29th, during the finals of the Men’s 200m Breaststroke, we witnessed one of the greatest upsets and surprises of the US Olympic Trials history. In lane 6, calm and poignant, Scott Weltz swam his way into the swimming history books as most of us stood on the poolside or behind our plasma screens, jaws dropped, with only one thing to utter…”Great Scott (Weltz)!”

His story is unique. His story is inspiring. His story is what the Olympic Games are about—and we should tell and re-tell this tale of a young man and his coach; they had a dream, they took risks…and they WON! I was able to sit down and talk with these two men the day after the upset race of the Olympic Trials. There is nothing physically predominate which distinguishes Scott from any of the other top breaststrokers—his size, technique and demeanor are consistent with most of the other 134 entries in the men’s 200m breaststroke. He is actually a normal kid. His coach, Peter Motekaitis, is certainly passionate about his ideas, his beliefs and most importantly his athlete. Many of the onlookers at the CenturyLink Center in Omaha might have been in such shock from the defeat of Hansen and Shanteau, that they may have missed the celebration of coach Motekaitis as he leaped the barrier which kept the eager coaches at bay, ran to lane six, slipped on the wet carpet and “hi-fived” his swimmer…euphoric and proud!

Scott hails from San Jose, California and his swimming career was very normal. He was a student at Bellarmine College Preparatory High School for boys (notably, the same high school of the legend Pablo Morales). As a high school senior he captured the CCS championship in the 200 Individual Medley; his junior year he won the 100 Freestyle. He graduated in 2005 and was recruited by UC Davis. In fact, Scott claims that UC Davis was “the only school that recruited him.” He of course dreamed of going to one of the big swimming universities, citing Cal, Texas and Stanford. Instead, Coach Motekaitis saw something in this young man, and even though he showed up on his recruiting trip wearing a “CAL” baseball cap, the 2 men embarked upon a 7-year journey towards an Olympic berth…a swimmer and coach with a dream.

To understand this story completely, one must first know a little about the swimming history of Scott while swimming as an Aggie at UCD…

Here is a quick recap of Scott Weltz at UC Davis:

To understand this tale even further, one must know the mastermind behind this tale, the one who inspired and motivated the athlete when he could push no more. Peter Motekaitis has been an icon of the U.C. Davis swimming program while serving for 15 years as Head Coach of the men’s team (unfortunately the program was dropped in April 2010) and more recently Pete has helped guide the women’s team as Associate Head Coach, alongside 37-year veteran Barbara Jahn. Motekaitis has also been part of the swimming community of Davis for over 30 years. He swam collegiately at UC Davis and graduated in 1983 with a degree in history; he was an All-American for the Aggies and set school records in the 100, 200 backstroke and the 200 individual medley; furthermore he coached both the local club (Davis Aquadarts) and the Davis Senior High School Blue Devils (the team won an unprecedented 23 straight league titles).  The recent success of Weltz is not the first time Coach Motekaitis has “tasted” the Olympic Fever. During the 2003-2004 season Pete helped then Cal graduate Haley Cope during her preparation for the 2004 Olympics in Athens.

The partnership of Scott and Pete is very close. In the post-win interviews, Scott constantly thanked his coach. They believed in each other…always. There were days when Scott would be in the weight room alone, and coach Motekaitis would join in. There were days when Scott would swim alone, and Pete would tell him, “When you are in the final, you will be alone…you must train yourself to handle that!” There are coaches and athletes that are saying, “Who is this guy…How did they do it?” Coach Motekaitis claims there was no secret. Just good old fashioned hard work. He does, however, believe in 3 key elements which guided this duo towards success: (1.) Using a 5 day training / 1 day off cycle as opposed to a more common 6/1 (2.) Sleep! Sleep! Sleep! Scott normally slept 9 to 10 hours per night (3.) Motekaitis swears that Scott is totally fearless and he will execute the plan.

One very interesting statistic from the three 200 breaststroke races of Scott Weltz (take note Braden Keith, lol) is that he always turned in the FASTEST 3rd 50 as compared to all the other top 25 (prelims), top 16 (semis) and top 8 (final). Here are those splits:

When I asked Scott the final question, “What do you plan to do in London…?” He replied quickly and honestly, “Win a medal!” If I was any of those other guys out there swimming the 200m breaststroke in London, I would take note of Mr. Weltz and be careful that last 5om…he is going to hunt you down!

I think if you are named Scott, you automatically have a good shot at being an upset pick for making the team in the 200 breast…Scott Usher, Scott Spann, and Scott Weltz

WOW! Spot on! Very cool coincidences! Maybe this name just carries some kind of responsibility to prove that all things are possible through hard work and dedication. If you remember, Usher’s case was similar to Weltz’, training in Wyoming, mostly 1 on 1 with a coach, etc. And Spann being a huge underdog at the time. Amazing!

Gruess Gott is a old-fashioned way to greet someone. I would translate it with greet(ings to) god!