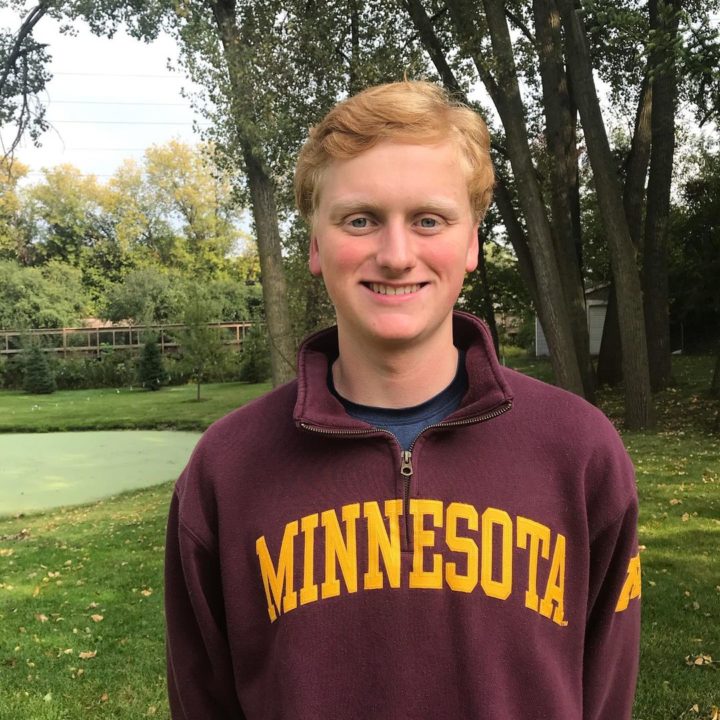 Edina, Minnesota native Thomas McCarthy has verbally committed to stay close to home and attend the state’s flagship university, the University of Minnesota, as a member of the high school class of 2021.

McCarthy, who announced his decision in September, is primarily a butterflier and an IMer. He celebrated his decision by swimming lifetime bests in 12 short course yards events in the months of October and November. That included almost a full second drop in the 400 IM and over 3 seconds in the 200 fly.

He finished 8th in the 100 fly at last year’s Minnesota High School State Championship meet just before quarantines shut down competition around the country.

The Minnesota Gophers finished 8th out of 10 teams at last year’s Big Ten Championship meet. The 100 fly, McCarthy’s best event, was a strength for the team, led by 6th-place finisher Matthew Thomas – who exhausted his eligibility at the end of last season.

The Gophers graduated both of their scorers in that event at the end of last season, however, meaning that there’s a need for sprint butterfliers in the classes of 2020 and 2021.

Notable is that in a class of 7 for the Gophers, 4 are natives of Minnesota. On the Gophers’ 2020-2021 roster, they have just 5 Minnesota natives among 35 athletes. Re-establishing recruiting in the talent-rich local programs will be key for the Gophers to rebuilding their program. Those 5 include another Edina High School grad, junior diver Ryan Phillip. The Minnesota women’s roster also has 2 Edina graduates on it this season.

My favorite swimmer on this year’s team is Kaiser Neverman! He is an all-around great person, academically he is tops and as a swimmer he is like a lightening bolt hitting the water. I am not saying this just because he is my grandson but because it is all true. I am glad to have this venue to inform others about Kaiser and I am a subscriber to this publication.
Go Kaiser! 🏊