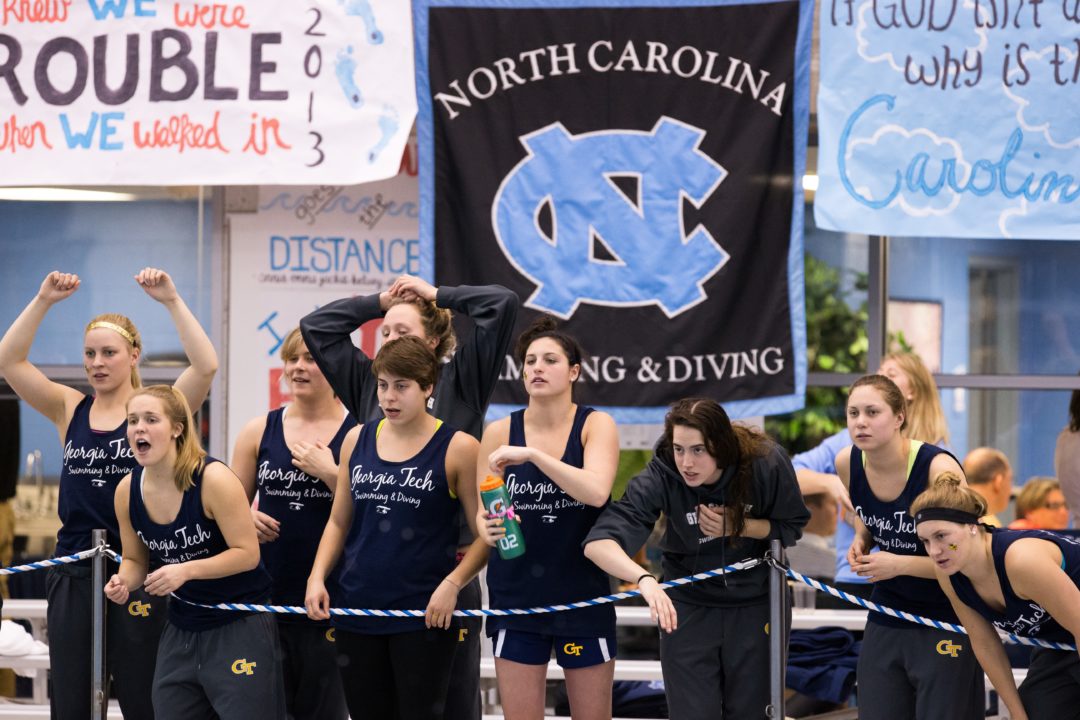 The Georgia Tech Yellow Jackets will hire an assistant away from their conference rivals at UNC, and also promoted a volunteer to a full-time roll. (Photo: Tim Binning/TheSwimPictures.com)

A source close to the Georgia Tech Aquatics program, who spoke on condition of anonymity because the moves haven’t been officially announced yet, reports that Georgia Tech will add two new assistant coaches for the 2013-2014 season.

One is former Chinese world-class swimmer Qu Yun, who was the 1994 World Championship silver medalist in both the 100 and 200 meter butterflies. She began as a volunteer assistant for the Yellow Jackets last season, but was officially brought on as a full-time assistant beginning on April 1st.

Among her other accolades was finishing 4th in the 200 fly at the 1996 Olympics. She just missed overlapping internationally with Georgia Tech head coach Courtney (Shealy) Hart, who won a pair of Olympic golds in 2000; Qu’s last major competition was the 1998 World Championships.

The other hire, which is pending dotting of i’s and crossing of t’s, is former North Carolina assistant Eric Stefanski. Stefanski spent 6 seasons as an assistant for Georgia Tech’s ACC foes in Chapel Hill.

Stefanski oversaw the sprint group for the Tar Heels, meaning that he was the coach of Steve Cebertowicz, who was 6th at the 2012 NCAA Championships in both the 50 and 100 freestyles: the first UNC swimmer to do so since 1965. The plan is for him to continue working with Georgia Tech’s sprinters, which is a relatively elite group for them. They qualified their 200 and 400 free, and 400 medley, relays for the NCAA Championships last year. Though none of those relays scored, there was only one senior (Eric Chiu) among them and a whole lot of sophomores to go with it.

They will replace departed coaches Chris DeSantis, who now works in Denmark, and eight-year assistant Marty Hamburger. Bill Koppelman is the only returning swimming assistant from last year’s staff.

Congrats to Eric (and Yun, though its been some months now. Go Jackets!

Eric is a great coach…he is knowlegeable and his swimmers really like him. UNC’s loss is GT’s gain, big time!!!