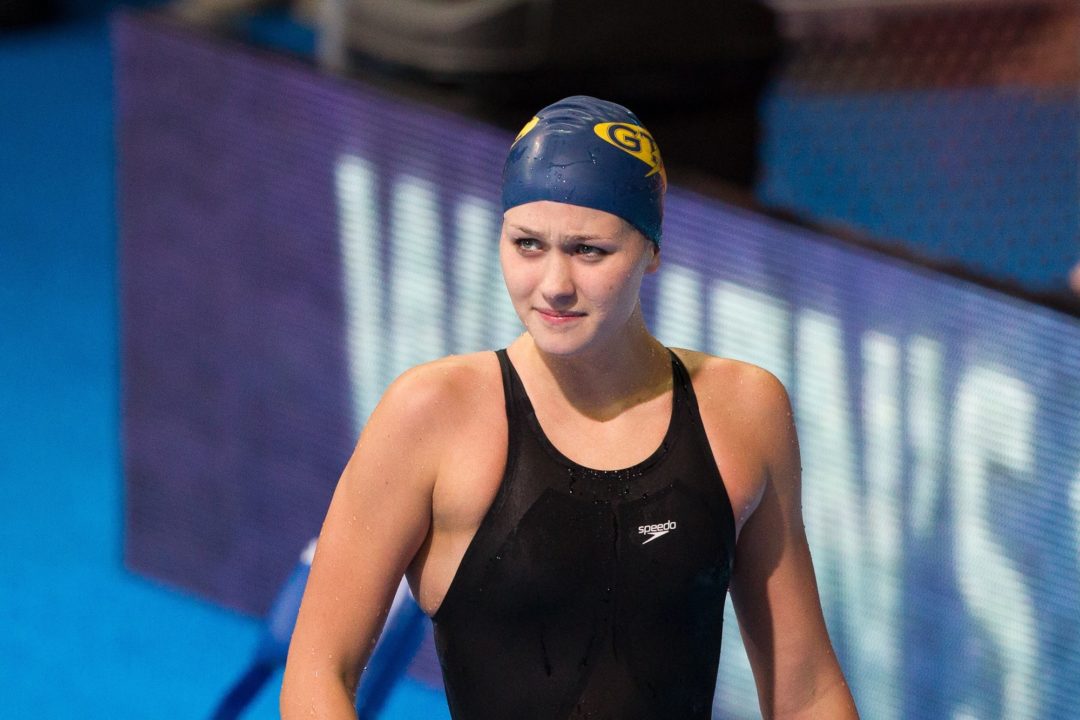 To see all of the latest news on college recruiting, click here.

The Georgia Bulldogs medley relays of the future are already shaping up to be incredible. Their latest verbal commitment is from Illinois backstroker Olivia Smoliga, who today gave her pledge to swim for the Bulldogs.

Though we’re in a run of multiple years of incredible women’s backstroke classes (c/o 2011, 2012, and 2013), Smoliga still stands out as a big-time immediate-impact freshman, with bests of 52.4 in the 100 yard back and 1:56.8 in the 200. That 100 time ranks her among the best high school backstrokers ever, and after a 59.82 in long course at the Olympic Trials, she’s among the elites with Rachel Bootsma, Missy Franklin, and Liz Pelton who have broken a minute in that race in high school.

In her junior season, Smoliga really worked on developing her versatility by focusing on the sprint freestyles. Not that her backstrokes alone weren’t worthy of a top-10 ranking in this class, but a 22.55 and 48.92, both swum for Glenview High School at the Illinois State Championship meet, makes her a hammer. She didn’t even swim the 100 back last season at that meet, she was so dedicated to those sprint freestyles; it will be curious to see what she attempts, and what she swims, this year as a senior.

The Glenview Titans club swimmer will bring a lot to the Georgia Bulldogs immediately. For starters, Georgia’s freestyle group, as strong as it is, is on the older end; her ability to step in to sprint spots on those free relays will help shore that up for another few years. Secondly, with Emily Cameron, the classes top breaststroker, having already given her verbal to Jack Bauerle and the Bulldogs, Georgia should have killer medley relays for the next four seasons. Those two big recruits visited Georgia together (among other schools).

That’s a new dimension for this team that has been so good in the free relays, but whose medleys have struggled to make A-finals. With Megan Romano completing her eligibility this year, Smoliga is already two seconds better than anybody that Georgia will have returning next season.

With this addition, the Bulldogs don’t have any great immediate needs. They’re likely still going after the big stars (Missy Franklin), but could still use a bit more depth in their backstroke and freestyle groups going forward. They have a great young butterflier in Lauren Herrington who had a very good freshman season, but could use some depth there as well.

Huge recruit for Georgia! Olivia Smoliga is already one of the best american backstrokers. Her underwaters are great and she can play with the Cal backstrokers in yards. She’s also good in the 50 free. For their medley and sprint relays it’s big. Imagine if they have Missy. There would be a competition with Cal in the future. We’ll see.

not to mention their sprint relays with smoliga, maddie locus,cameron and chantal van landeghem will be top 5 at least! very exciting especially if they get missy!