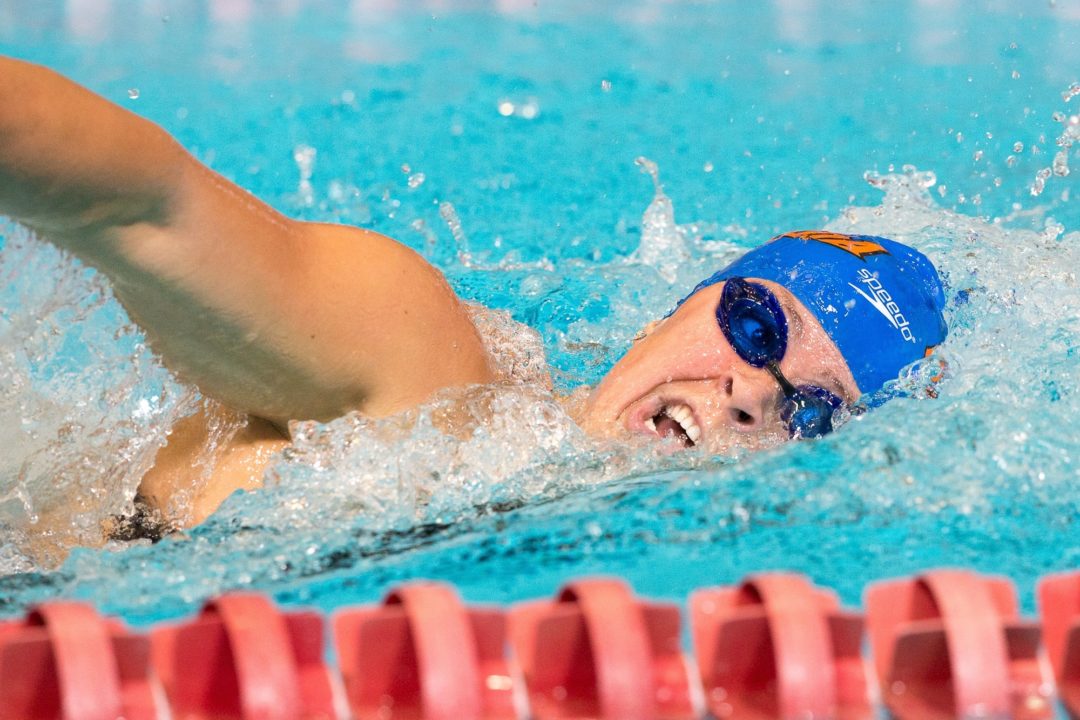 Florida Olympian Elizabeth Beisel was honored not for her traditional IM races, rather it was her freestyle that garnered Swimmer of the Week. Archive photo via Tim Binning/TheSwimPictures.com

Florida Gator swimmers Elizabeth Beisel and Dan Wallace have been named as the SEC’s Swimmers of the Week for January 21st after the Florida women rolled over Florida Atlantic, and the Florida men took 2nd at the SMU Classic.

Beisel won this award for an astonishing 9th time in her career, and it was well deserved after the Gators topped FAU by an exhibition-skewed 175-112 score.

She also won the 200 fly in 1:54.60 and split a 49.98 in the 100 yard free leading off the Gators’ ‘B’ 400 free relay. As much success as Beisel has had in her collegiate career, she has never looked as good in January as she did last weekend. For example, as compared to a meet in the similar time period last year, Beisel was over three seconds faster in that 200 fly.

The Male Swimmer of the Week Award went to another Gator, Dan Wallace. He won every race he swam at the SMU Classic (though not all were in the pre-determined ‘A’ final), with the highlight being a 3:42.11 in the 400 IM. That broke both Tyler Clary’s Perkins Natatorium Record and the Meet Record, and pushed him to 4th in the country this season in that event.

The Male Freshman of the Week category went vacant this week as there were no nominations, but Female Freshman of the Week was won by Kara Kopcso of LSU. She won both the 100 (53.38) and 200 (1:56.12) yard fly events, both in lifetime bests, and in the longer of those two events topped defending NCAA Champion and Olympian Cammile Adams. That swim also likely ensured Kopcso her first bid to the NCAA Championships (it’s not an automatic qualifier, but it’s historically fast-enough).

It is to my knowledge Kopcso wore a suit (?).

This is correct, and as we reported in our original meet recap.

Is Beisel a senior now?

Naya Missy – she sure is.