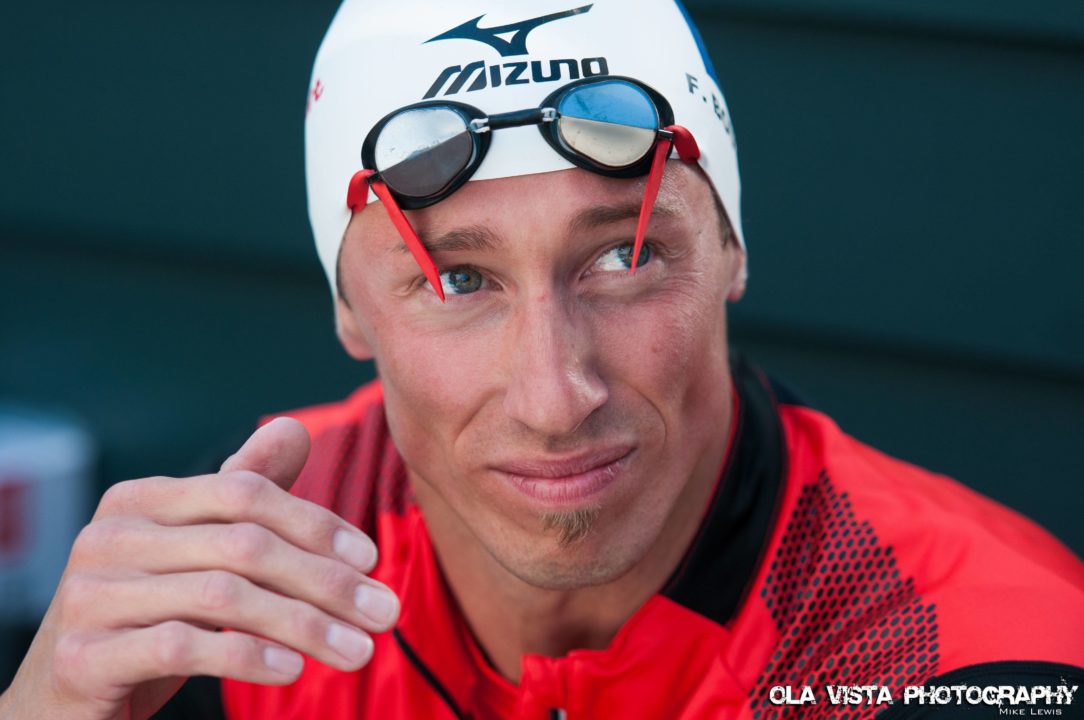 The roster is highlighted by Olympic champions Yannick Agnelon the men’s side and Camille Muffat on the women’s, both of whom are trained at Olympic Nice Natation.

This meet will also see the return to the world’s stage of Fred Bousquet, who painfully missed out on the Olympic Team this year, and his partner Laure Manaudou. Interestingly, the roster still lists Clement Lefert among it, despite his declaration last week that he was retired.

All-told, this lineup seems as though it will give the French one of the strongest at the short course championships, which are often with less-than-full attendance. The roster, seen below, has 20 men and 12 women on it, which will also make it one of the biggest.

For the upcoming European Championships, France will send an even bigger roster of 55 athletes, and as the host country will hope for a good performance. This roster leans toward the younger side (though it will still include many of the superstars). Among the rising names in this group are  19-year old Mehdy Metella, the future of French butterflying, and 17-year old Beryl Gastaldello, one of the top junior sprinters in Europe.

The full roster for the European Championships, held in late November, can be seen at this link.

Actually , nobody is unbeatable ……..we saw that with Phelps on 200 butterfly in London . So , i would rephrase what i said : Agnel and Schmitt look really unbeatable on 200 free but anything can happen in a big final .

Good squad ! Even if many countries give less interest in short course championships , i found that it is very spectacular . Some swimmers love the short distance pool and give
a lot of amazing spectacular swims . I hope the Us will send a good squad as well … the face to face with France will be owesome . 200 free men : Agnel is unbeatable . 200 free woman :
Schmitt is now unbeatable as well .

This list is a joke! Alain Bernard and Clément Lefert have retired. Fabien Gilot suffers from a shoulder for 2 years and has had a surgery this week. He will not swim this year anymore. And Hugues Duboscq will retire after the european short course championships in France in November.
I can also say you that Amaury Leveaux stops the 200 free. It’s too long for him. He’ll focus now on the 50 free and the 100 free. After the retirement of Clément Lefert it’s another bad news for the french 4X200 free relay.

i thought the French 4X200 was suppose to take over? well, maybe others will step up. but i heard this before. Not to long ago, everyone was on the Russian bandwagon saying how they were the new generation and they were suppose to end the American’s reign. they looked good at moments, but that obviously didn’t happen. nevertheless, i like to see some competition! the women’s 4X200 race was probably one of the most exciting relays in London.

How are Agnel’s underwaters? i wonder if his long course success will move to the short course scene? but yeah, looks like the French are taking these championships very seriously, they are going all out. very likely they will come out on top on the medal standings

Their underwaters are much better than in 2010 when Ryan Lochte had beaten him very easily. But underwaters or not Yannick Agnel is now unbeatable in the 200 free during the next 4 years. He has so much speed for the first part of his race and his finish is very strong. And he will continue to become more powerful. I don’t see a swimmer in the world to beat him in the next big competitions. We’ll see.

We saw so much stuff happenning the past 2 years on swimming (Yamaguchi now, Magnussen rising and not delivering, Cielo swimming the worst 50 free of his life, clary surprising locthe, Le Clos, just to stay on men´s side) that one guy anywhere might rise on any race and take out the status of unbeatable of any swimmer (maybe except Sun Yang)

Ok for the possible new names in the future but today give me a swimmer able to swim around 1.43 or better except Yannick Agnel because I don’t know him.

i agree, i see Agnel dominating the 200 free for years to come. while everyone is barely breaking that 1:45 barrier, Agnel has really set the bar high with that 1:43. he is really miles ahead of the field (similar to Magnussen’s 47 low). Yang could possibly challenge him, but as long as he’s swimming that 400, i don’t see that happening. plus i don’t think he has the kick to keep up with Agnel.

Yang surely has the speed needed to take on the challenge, but he don´t come out fast.. He´s like a machine that needs to run for some time before reaching full power.. If he were able to go all out since the beginning he could be a worthy challenger.

As I kept repeating myself early this year when I found out Agnel ditched 400, it was the best decision he ever made.