France With 53, Russia With 40 for 2013 European Short Course Championships 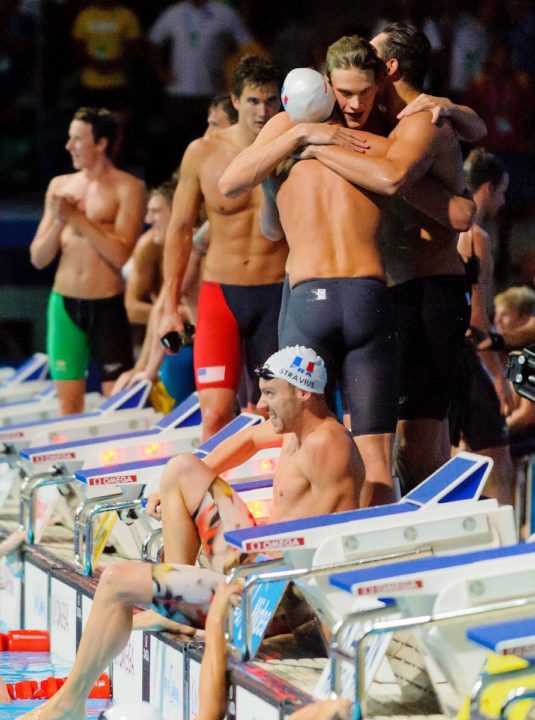 The French team, less Yannick Agnel, will have a monumnetal roster for the 2013 European Junior Championships. photo via Victor Puig

In total, 40 different countries will be represented at the 2013 European Short Course Championships that run from December 12th-15th in Herning, Denmark, with a total of 670 athletes having been submitted at the close of the “preliminary entry period”.

The meet has been placed center-stage by its host Danish Swimming Federation; they’ve even gone so far as to hosting the meet in a temporary pool in the Jyske Bank Boxen: a huge 15,000 seat arena.

For France, though they’ll be without their most famous swimmer Yannick Agnel, but will enter the biggest team of 43 swimmers. The Russians will send 40, and Denmark will send 38.

The Brits, who usually perform well on this meet, have backed off on their roster, as they have for many meets due to a post-Olympic funding slump. They’ve pre-entered 20 athletes, but their selection procedures said that the team would be capped at 16 swimmers. This could mean they’ve relented, or it could mean that they will cut down their roster before the final deadline later in the fall.

The versatility of this meet is what makes it a lot of fun. From smaller swimming countries like Montenegro, Latvia, and Georgia to the powers like France and Russia, there’s a huge diversity of European nations participating. 80%, or 40 out of 50, LEN member swimming federations will participate, with Azerbaijan, Albania, and Armenia being among the notable exceptions.

The full table showing numbers of swimmers entered can be seen below: