The Iowa Hawkeyes have kept the state's best senior at home with their latest verbal commitment. Stock photo via Tim Binning/TheSwimPictures.com 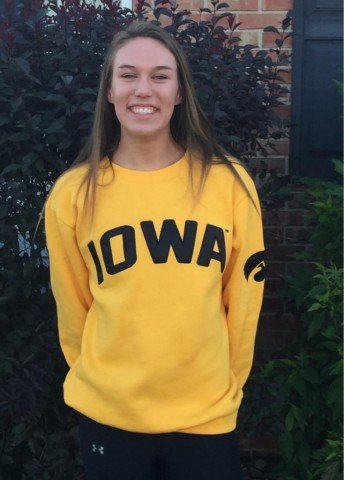 The Iowa Hawkeyes have managed to hit an ‘in the park home run’ with their first public verbal commitment in the women’s recruiting class of 2016. They kept by far the state’s best senior home, earning a pledge from Allyssa Fluit on Wednesday.

This breaks a trend of the last few years where many of the state’s best swimmers escaped to other regional schools (Missouri, especially) or chose other in-state programs instead.

Fluitt is the two-time defending Iowa High School State Champion in the 200 yard and 500 yard freestyles, having been 1:47.14 and 4:50.20 in the two races, respectively, as a junior last year.

But here’s what could wind up making Fluit the steal of the class – the Southeast Polk High School product didn’t start club swimming until this summer, having just two career long course meets to her name.

With the graduation of Becky Stoughton after last season, and Olivia Kabacinski having just one year of eligibility remaining for the Hawkeyes, Fluit should immediately become Iowa’s top middle-distance swimmer when she arrives on campus in the fall of 2016 (pending development between now and then).

Fluit says she chose Iowa because it’s the place where she felt most comfortable.

“Swimming to me isn’t all about the competition and winning,” she said. “Sure, that’s amazing, but it’s just the bonus, I’ve been a part of swimming families that mean more to me than a shiny medal. Good relationships are the key to everything in my opinion, and that’s the one thing I looked for when looking through colleges, nothing else mattered to me, I just wanted to feel a part of a family and know that I was welcome and that I would make some sort of impact wherever I went.

“(Coaches) Marc (Long) and Kristy (Brader) did an amazing job at making me feel like I wasn’t just another number to add to the team. The guys made me feel a part of the family when they offered me a seat in the middle of all of them at a swim meet to help cheer for the girls. Some of the girls have reached out and have been extremely supportive as well. So I went with Iowa because they made me feel included and wanted, and not just because of my skill in the pool. They made me feel like they were interested in me as a person as well and they made me feel like anything was possible for me and my future.”

Great pickup for the Hawkeyes! It’s not long until the women move up in the Big Ten.

She is a gifted and TALL athlete with a lot of raw talent. Technique wise she should improve and drop a lot.

Does she even know she could take some recruiting trips and explore her options? A 4:50 in the 500 Free could shop around a bit for a few weekends in the fall.

Cool that the third best team in the state can only celebrate about women’s swimming…happy this young lady decided to stay in state, wish her the best

Third Best Team in the State in What?

UNI and Drake have NCAA minimum athletic programs, while Iowa St has dropped 4 mens sports in the past 20 years. The University of Iowa has one of the largest programs in the midwest and in the top quarter of the nation. Not to mention rumors of possibly adding 2 to 5 more NEW sports and with the highest graduation rate in the Big 10, there is no doubt which is the premier program in Iowa- PERIOD.