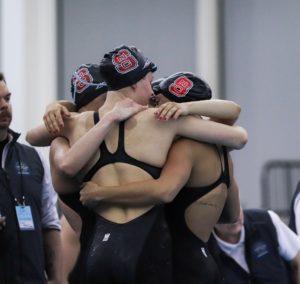 NC State didn’t take any top seeds this morning, but will have 16 finalists across tonight’s three individual events, including four in the 500 free A-final.

With 12 swimmers and divers qualified for A finals and 2 for C finals, Princeton is making a move on the Harvard Crimson on Day 2 of 2020 Women’s Ivy Champs.

The younger brother of two-time Philippines Olympian JB Walsh, Bobby has created a submission video seeking to become a contestant on the “American Ninja Warrior” gameshow.

In the video, Walsh highlights his swimming at the University of Florida, where he says he practiced 9 times a week, at 8,000 yards per practice. Bobby Walsh also represented the Philippines at the 2009 World Championships, and is studying law with designs on joining the United States Navy.

This wouldn’t be Walsh’s first game show experience – he once appeared on CBS’ long-running daytime gameshow “The Price is Right” and won a new car.