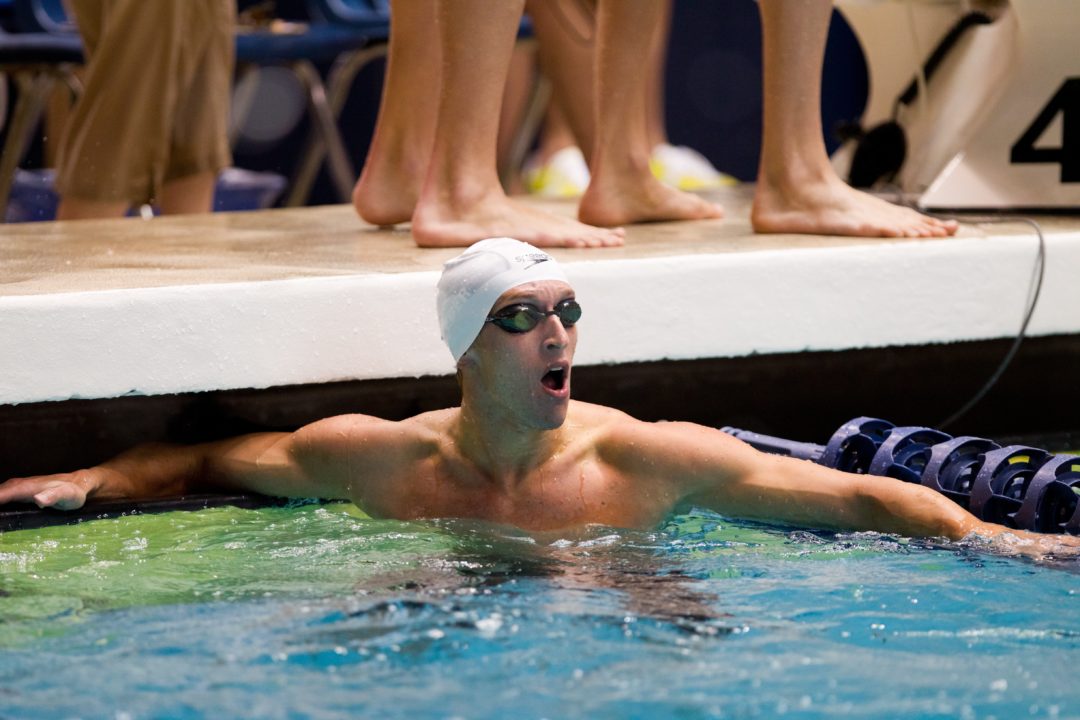 Mark Weber, above, anchored the Seminoles to a new school and ACC Record in Atlanta. (Photo Courtesy: ©Tim Binning/TheSwimPictures.com)

We’ve been raving all-year long about the potential of the Florida State sprinters this season; Neil Harper’s charges made that come true in a big way on Friday evening in Atlanta, as his boys’ 200 free relay swam a 1:16.76 to top a four-team men’s field at the Georgia Tech Invite. That time would have placed 5th at last year’s NCAA Championships, and would’ve been just two tenths from an NCAA title. It also crushed the ACC record that was held by Georgia Tech in 1:17.84 from 2009.

This swim was really impressive, probably the best of any of the college invites and rivaling most of what we saw at Winter Nationals as well. The relay of Paul Murray (19.35), Trice Bailey (19.02), David Sanders (19.58), and Mark Weber (18.81) is experienced with three seniors and a junior, and have national title potential. It’s hard to guess if they’ll be able to go any faster at year’s end, but this was a really, really great time.

Their women’s sprint relay won a much more competitive race, toughing in 1:31.64 ahead of Florida Gulf Coast’s 1:31.70. Tiffany Oliver was a 22.17 on the 2nd leg for the Seminoles, which is easily the best time of the field. The Eagles were a bit more balanced in their relay, with three swimmers touching in 22.7’s or 22.8’s. As FGCU’s Emma Svensson is getting healthy again (she’s been battling mono this year), they’ve got a great relay of their own.

Not surprisingly after those performances, Florida State swept the sprint 50 freestyle titles as well. In the men’s race, Mark Weber swam a 19.59 for the victory, followed by Paul Murray (19.60) and Trice Bailey (19.83). We’ll have to wait until this weekend shakes out to see where national rankings stand, but even including the first day of Winter Nationals, Weber and Murray were both faster than anybody in the country had been coming into Friday. Georgia Tech’s Andrew Kosic was 4th in 20.07.

In the longest race of the day, the 500 freestyle, Alabama’s Brian Westlake won in 4:24.92. That’s a best time for him by almost three seconds. He pulled past Florida St. frosh Derek Pridemore in the last 100 yards, as Pridemore finished 2nd in 4:25.84. Florida State’s John Jessell was 3rd in 4:25.95. Though there’s still a need to build up the talent in Alabama, things seem to be going pretty well in at least some pockets in Dennis Pursley’s first year in Tuscaloosa.

The women’s 500 was also won by a freshman, with Madison Jacobi topping the field in 4:47.38 for an NCAA B-time. She was followed by sophomore teammate Julia Henkel in 4:50.18 for a Florida St. 1-2 finish. Former Florida Gator Eva Lehtonen struggled in her first season at FGCU, but looks better this year: her 4:52.19 for 3rd is her best since the 2010 SEC Championships when she was just a freshman.

In the women’s 200 IM, Florida State’s McKayla Lightbourn won in 1:59.82 by taking a monster front-half lead. She was almost a second ahead of the field, and two seconds ahead of runner-up Julie Leth-Espensen (2:00.68). Leth-Espensen is a great breaststroker and closed that gap, but ran out of room at the end of the race to run down Lightbourn.

In the session-ending 400 medley relay, the Florida Gulf Coast women won in 3:41.10, thanks once again to a balanced attack. They’ve got freshman Jennifer Morgan on the backstroke leg with Svensson anchoring, and Svensson’s finishing 49.83 was just enough to hold off Florida State. That’s because the Seminoles had a big anchor from Oliver of 48.41, but were only 2nd in the relay in 3:41.28.

Miami was great on the first three legs, including a great 52.0 butterfly leg from Lucy Worrall. They lost a lot of ground on the freestyle leg to slip to 3rd in 3:42.46.

The men’s medley went to the hosts from Georgia Tech in 3:12.99, just missing an NCAA consideration time. The back-half of this relay is its strength, with Swiss record holder Nico van Duijn splitting a 46.41 on the butterfly leg and Andrew Kosic anchored in 43.07. This is the Yellow Jackets’ best chance at qualifying a relay for the NCAA Championships, though van Duijn at least should qualify individually.

Florida State, for as good as their freestylers are top-to-bottom, still need to find more depth in their strokes to move into the next tier of teams nationally; they were 2nd in 3:14.08. That includes a 43.31 anchor from Weber. Alabama was 3rd in 3:22.61, a time that needs some serious work.