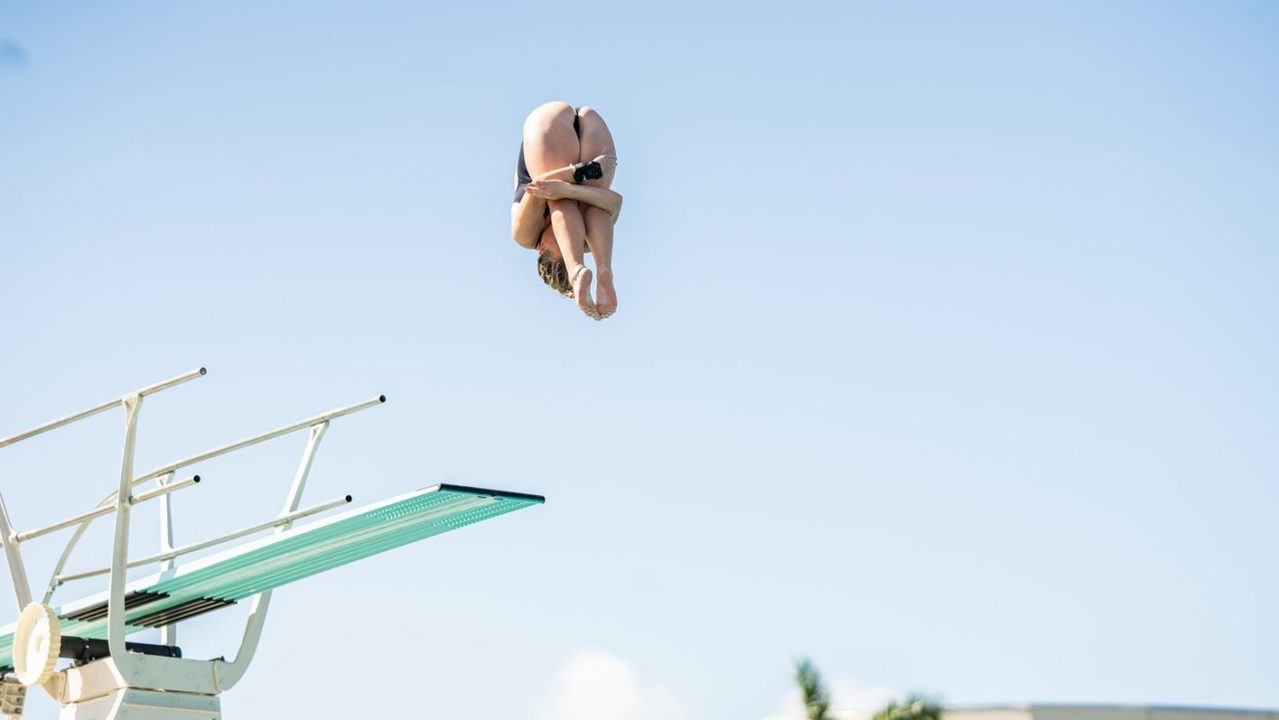 The FIU swim and dive program hosted 431 student-athletes at the Biscayne Bay Aquatic Center on Saturday to close out its winter training program. Current photo via FIU Athletics

MIAMI (Jan. 4, 2020) – The FIU swim and dive program hosted 431 student-athletes at the Biscayne Bay Aquatic Center on Saturday to close out its winter training program.

The event, which lasted three hours, concluded with the Panthers taking 743.5 points kicking off 2020 on a high note.

“Today was a nice combination of training and competing, which we have been working on for the last week and a half,” said head coach Randy Horner.

Stephanie Hussey kicked things off in the 200 freestyle and tied for third with a time of 1:56.19. Teammates Helga Fodor and Eriana Temperino chased fifth and sixth place with times of 1:56.62 and 1:56.92, respectively.

Lamjia Medosievic impressed in the 100 free event taking first place with a time of 52.21, besting the runner-up swimmer by .73. Julia Miranda followed in the 100 Backstroke, swimming the fastest time of 28.25 and Michaela Trnkova swam a close second with a time of 58.60.

Medosevic swam a time of 4:13.64 in the 400 freestyle, securing another top-three spot for FIU. Hussey swam the 100 fly next with a time of 58.22 landing in the number four spot in the race. Kelsie Campbell chased fifth with her time of 58.51.

The 50’s of each stroke were scored in a tournament-style relay.

In the final heat 50 backstroke, Medosevic took first as she went head-to-head with Purdue’s Natalie Mudd, tapping at 26.42 for the first-place finish.

During the 50 breaststroke show down, Sara Gyertyanffy tapped at 29.08, just .54 short of taking down Purdue’s Phee Junq En.

The Panther duo of Kelsie Campbell and Kasia Kolodziej, fought wire to wire in the 50 fly and Campbell tapped first with her time of 25.69.

The final event of the day concluded with a Medosevic win. The freshman tapped at 23.88 taking home ths number one spot in the 50 free.

“I’m proud of the hard work and toughness that they showed today at the invitational,” said Horner.

NEXT UP
The Panthers travel up the west coast to face FGCU in Fort Myers, Florida on Saturday, Jan. 25 at noon.