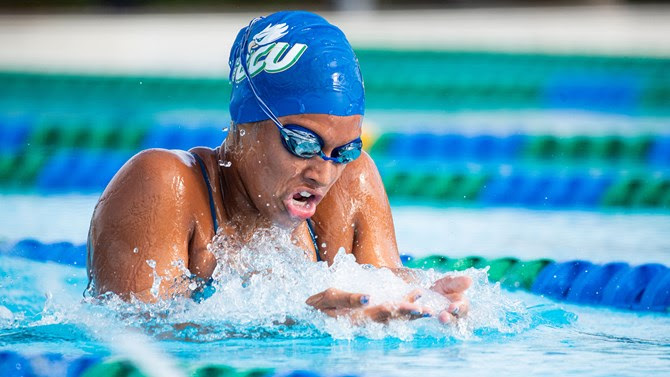 This will be the second meeting of the season between the Eagles and the Panthers, having already clashed at the FGCU Invitational in November. Current photo via FGCU Athletics

FORT MYERS, Fla. – Back home after claiming its first conference victory on the road at UNF, the FGCU swimming & diving team (1-1, 1-0 CCSA) will now host FIU (0-0, 0-0 C-USA) this Saturday, Jan. 23 at the FGCU Aquatics Center. The meet is scheduled for a 3:30 p.m. start and will be open to 50 spectators. All attendees are required to wear masks at all times and must adhere to CDC guidelines, which include social distancing.

Earlier this season, FGCU faced off against both FIU and Georgia Southern in the FGCU Invitational, which was hosted at The Nest back in November. Following three days of competition, the Green & Blue’s 1,420 points earned the team a first-place finish. FIU came in second with a score of 994 and Georgia Southern’s 712 landed the team third overall.

The Eagles are coming off a weekend in which they claimed their first dual win of the 2020-21 season, downing UNF by a score of 201-61. The team collected first-place finishes in each of the meet’s 14 events and swept four different races throughout the day.

Sophomore Anna Hogan (Louisville, Ky./Dupont Manual School), who earned top-four finishes in each of the events that she competed in against Miami and UNF, was named Co-CCSA Swimmer of the Week for the first time in her career on Tuesday afternoon.

Hogan, who won both the 100- and 200-yard breaststroke events during the competition with the Ospreys, is the second Green & Blue swimmer to receive the honor this year, as senior Petra Halmai (Dombovar, Hungary/Lanczos Kornel Secondari Grammar School) was tabbed following the FGCU Invitational. Halmai, an All-American from the 2019-20 season, swept the weekly awards that week with the help of sophomore Reese Wakefield (Guelph, Ontario/Bishop Macdonelle CHS).

Before making the trip to Fort Myers, the Panthers will face off against Miami on Friday afternoon in Coral Gables. It will be the swimmers’ second competition of the season, as FIU has only competed in the FGCU Invitational so far. The divers took on Florida on Jan. 17 and nearly swept all three events, picking up wins on both the 1m and 3m boards.

This weekend’s dual will be the 15th in the history between the two programs. FGCU currently owns an 11-3 all-time advantage over the Panthers, though FIU has won back-to-back meets against the Eagles. In the 13 years the teams have been competing, FGCU has averaged 153.68 points per meet against FIU.