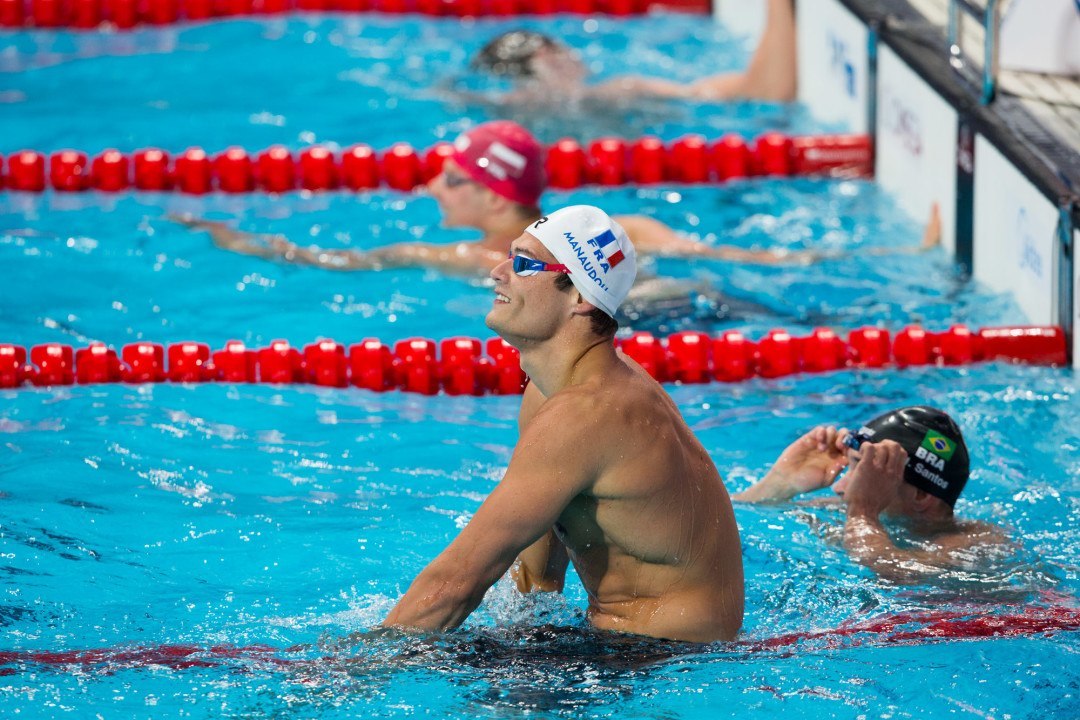 French superstar swimmer and defending Olympic Champion in the 50 free has opened his first restaurant, and he’s named it after his second home: La Piscine.

The phrase is French for “the pool,” and he’s hoping that his restaurant will have as much success in La Piscine as he does in the pool.

Like all athletes, I like challenges. This restaurant is one of them. I picked up the guitar a year ago, I ride motorcycles…It’s good to have several interests,” Manaudou said.

He has hired as his head chef Georgiana Viou, a contestant on the first season of MasterChef France. The restaurant has a pool theme – with staff wearing lifeguard tshirts and the dining room decorated with blue tile. The menu has a “short course” and “Olympic pool” and “Dive into desserts” as sections of the menu.

The restaurant is in Marseille, where Manaudou lives, and features menu items like burrata, pork tenderloin topped with a carrot mousse, and saffron risotto.

Manaudou will swim the 50 free individually and on the French 400 free relay. That means he’ll swim on Sunday, August 7th (the meet’s second day) and then again on Thursday August 11th and, presuming he qualifies for the final, Friday, August 12th.

I assume he does okay between his army pay, medals/records, and endorsements. I view this as more of a step toward securing long-term income outside of the pool, though. He won’t be in the army forever, and even if he can have some residual income from endorsements, it’ll probably be nothing compared to his active days. That’s just my guess though, he could just have a ton of money to throw around, for all I know.

I was hoping the predictably named restaurant was going to be Xanaudou, and that it was in a giant nightclub with waitresses on roller-skates, including the “Olympian Muse”, Kira. Yeah, I’m old, deal with it.

But I can roll with La Piscine, it sounds fun. Bobo if you make it to Marseilles you gotta give us a review sometime.

So he has left the army?

Nah, he just wants to waste some of his money on this project whilst he is still milking the French taxpayer. That’s an item that should appear on his menu…..under the title “Double Dipping”.

I’m betting he’s got a deal where somebody’s financing the establishment and he’s “licensing” the use of his name. He’s the front guy with a residual interest but somebody else is putting up the cash.

He said in one interview that the restaurant is investment with his agent and his 2 friends so I think he is not licensing it but he is really investor.