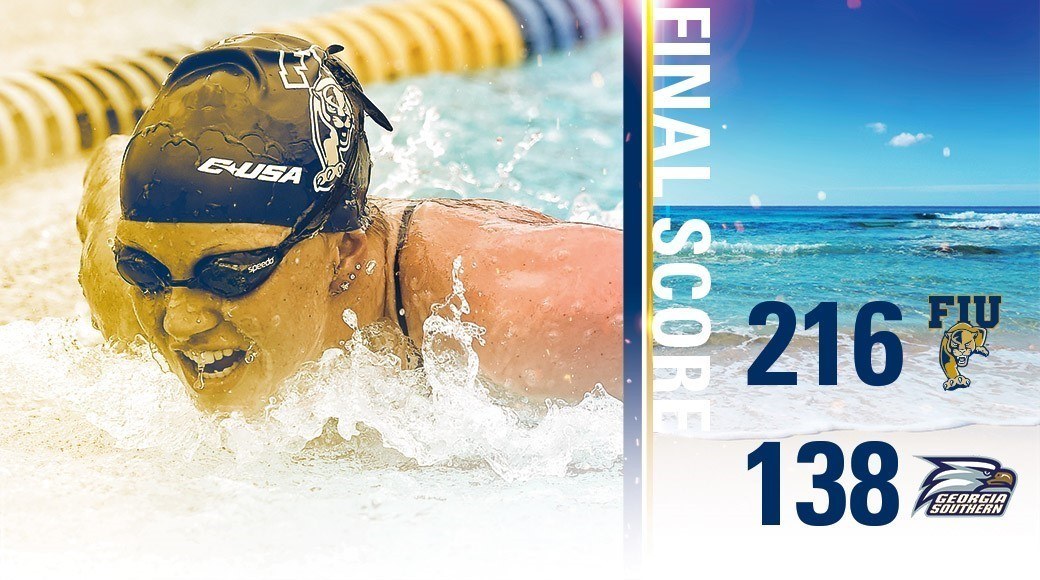 The FIU swimming and diving team (7-1) remained perfect at home (4-0) with a 216-138 win over Georgia Southern on Thursday afternoon from the Biscayne Bay Aquatic Center.

The Panthers took a 31-6 lead after the first two events and maintained their advantage for the entire meet as FIU claimed its seventh-straight dual victory.

The team of Skye Carey, Taylor Grabenhorst, Jennifer Deist and Letizia Bertelli won the 200 Medley Relay with a time of 1:46.12 for the first 11 points of the day. Ally Mayhew, Chase Harris, Maria Lopez and Alexa Bryant added two more points in the event, finishing third with a time of 1:50.85.

FIU out-scored Georgia Southern, 18-2, in the meet’s second event as the Panthers swept the top three spots in the 1000 Free. Oceane Peretti notched a season-best 10:35.62 to claim first followed by Berta Triola (10:45.85) and Rachel Whitaker (10:46.00).  The 25-point lead heading into the day’s third event set the tone for the meet as the Eagles pulled no closer than 20 points.

In all, the Panthers won 12 events and placed in the top three 32 times.

FIU swept both the 1-metter and 3-meter diving programs to cap off the victory. Rebecca Quesnel recorded a season-high mark of 296.25 for her third win of the season in the 1-meter. Brittany Haskell (290.25) and Brook Bouchard (273.76) rounded out the top three. In the 3-meter, Quesnel, Haskell and Bouchard went one, two, and three with scores of 301.65, 294.30, and 283.12. All three scores in the 3-meter were season highs for each Panther, while all six diving scores were NCAA Diving Zone B qualifying marks.

FIU will next host a tri-meet versus Yale and Cornell on Thursday, Dec. 29. The event is slated to begin at 5:00 p.m. from the Biscayne Bay Aquatic Center.

About FIU Athletics: FIU Athletics is home to more than 400 student-athletes in 18 different sports. Athletic events are played in seven different venues on FIU’s campuses (Modesto A. Maidique and Biscayne Bay), including FIU Arena and Ocean Bank Field at FIU Stadium.

About FIU: Florida International University is recognized as a Carnegie engaged university. It is a public research university with colleges and schools that offers more than 180 bachelor’s, master’s and doctoral programs in fields such as engineering, international relations, architecture, law and medicine. As one of South Florida’s anchor institutions, FIU contributes $9.8 billion each year to the local economy. FIU is Worlds Ahead in finding solutions to the most challenging problems of our time. FIU emphasizes research as a major component of its mission. FIU has awarded over 200,000 degrees and enrolls more than 54,000 students in two campuses and three centers including FIU Downtown on Brickell, [email protected]I-75, and the Miami Beach Urban Studios. FIU also supports artistic and cultural engagement through its three museums: the Patricia & Phillip Frost Art Museum, the Wolfsonian-FIU, and the Jewish Museum of Florida-FIU. FIU is a member of Conference USA and has over 400 student-athletes participating in 18 sports. For more information about FIU, visit http://www.fiu.edu/.