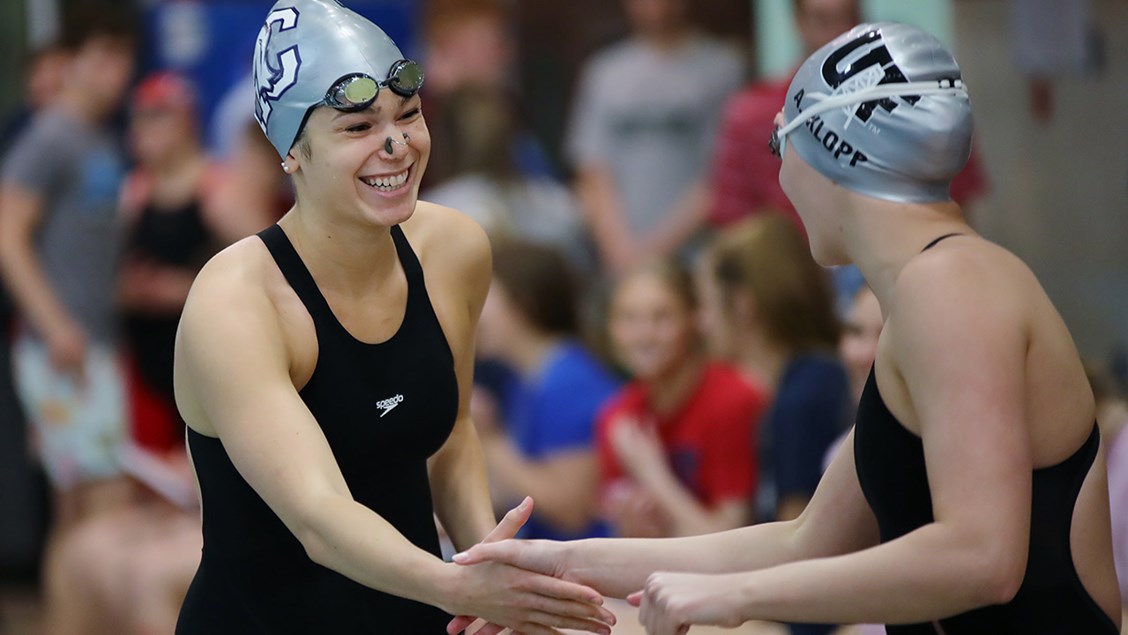 The Hillsdale women held on to its lead and are bidding to be the first program other than Findlay in the meet’s three-year history to capture a team title. Current photo via Great Midwest Sports

CANTON, Ohio – Now halfway through the Great Midwest/Mountain East Conference Swimming & Diving Championships, scoring for 13 women’s teams is starting to round into focus at the C.T. Branin Natatorium from Thursday’s action.

Hillsdale held on to its first-day lead and is bidding to be the first program other than Findlay in the meet’s three-year history to capture a team title.

The Chargers racked up points in bunches by placing multiple student-athletes in the final heats of their respective events. Hillsdale has a total of 771 points while the two-time combined meet champion Oilers are in second with 719.5 points.

One meet record was set on Thursday after Findlay senior Katy Kouvaris bested her own conference and meet record in the 100 butterfly. Kouvaris did so in the morning prelims with a time of 55.73.

It was teammate Hanna Cederholm winning the finals of the 100 butterfly and marked her fourth event victory of the meet so far. Cederholm set the 200 IM meet record on day one and has additional 200 freestyle and 400 medley relay wins.

Kouvaris was also a contributor to those winning relay combos and the Oilers swept all relays to date with a 200 medley relay win.

The 400 IM was a great showcase for Hillsdale senior Danielle Snell (formerly Lebleu), who finished as the runner-up in the 2019 meet. Snell defended her top seed prelim time with a final time of 4:37.57.

The Chargers went 1-2 at the podium for that event as another senior, Allie Matti, touched the wall next. Together, Snell and Matti combined for 60 team points in the 400 IM alone.

Host Malone is in third in the team standings with 422 points. Fairmont State and UNC Pembroke, both from the Mountain East are fourth and fifth.

The Great Midwest has a total of seven event wins while the Mountain East has three event victories going into Friday’s competition.

CANTON, Ohio – Now halfway through the Great Midwest/Mountain East Conference Swimming & Diving Championships, scoring for 10 men’s teams is starting to round into focus at the C.T. Branin Natatorium from Thursday’s action.

Findlay extended its lead as a team with an impressive all-around display in individual and relay races on day two. The Great Midwest is 1-2-3 in the team scoring with the Oilers totaling 775 points, Tiffin securing 567 points and Malone earning 504 points.

Between Findlay and Tiffin, all 10 event wins in the meet to date are all featured from the top two scoring programs.

On Thursday, it was the Tim Stollings show as the Findlay freshman wowed onlookers and fans with his efforts that brought his event win total up to four. None of those first-place finishes were more impressive than his 100 butterfly showcase as he became the first student-athlete to break a pool record in three years.

Not only did Stollings shatter the overall combined conference record and meet record, but he now ranks No. 1 in all of Division II, officially passing Drury’s Pasha Semochkin (46.54).

Stollings was clocked at a blistering 46.53 in the final, passing previous record holder and UF standout Janko Radmanovic in both the prelim/final attempts in the conference record books.

What’s also scary – Stollings has yet to even compete in the 100 backstroke, an event that he currently holds the conference record in as well. He did that feat at the Calvin Winter Invitational in December.

Wright kicked off the nighttime finals session with a score over 446 in the 1-meter height. Sumfleth broke the combined conference meet record in the 200 freestyle while Garcia Arroyo won his second event of the meet with a 400 IM time under four minutes.

Garcia Arroyo captured the 200 IM title by a hare on Wednesday over teammate Sumfleth while Christoph Hohenfeld delivered TU’s first event win in the 1,000 freestyle.

At this point in the meet, seven meet records have fallen and two overall conference records have been reset.