26 long distance swimmers, 15 men and 11 women, are set to take the departure on Sunday.

Experienced athletes such as Argentina’s Damian Blaum, Guillermo Bertola and Eugenij Pop Acev of Macedonia are among the favourites, while Barbara Pozzobon and Alice Franco of Italy are well-known for their excellent performances in the circuit in the recent years. Argentina’s Cecilia Biagioli and Pilar Geijo are also taking the plunge and will be supported by the local crowd. 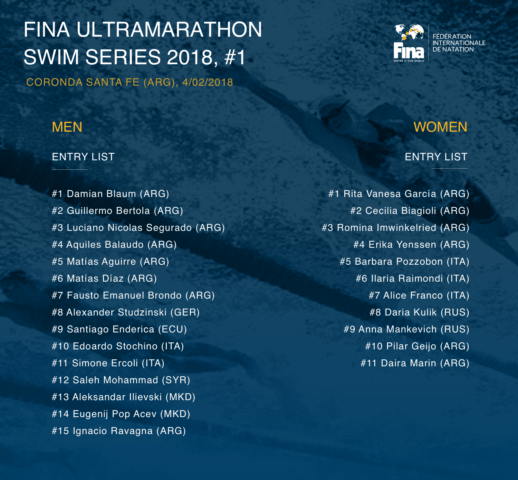 After Coronda Santa Fe, the UltraMarathon will then stop in Lac St Jean in Canada on July 28.

The Fédération Internationale de Natation, founded in 1908, is the governing body for aquatics worldwide. FINA’s five discipline Swimming, Open Water Swimming, Diving, Water Polo and Synchronised Swimming – are all included in the Olympic programme. High Diving made its first appearance in FINA events at the 2013 FINA World Championships. FINA counts 209 affiliated National Federations on the five continents and has its headquarters in Lausanne (SUI).