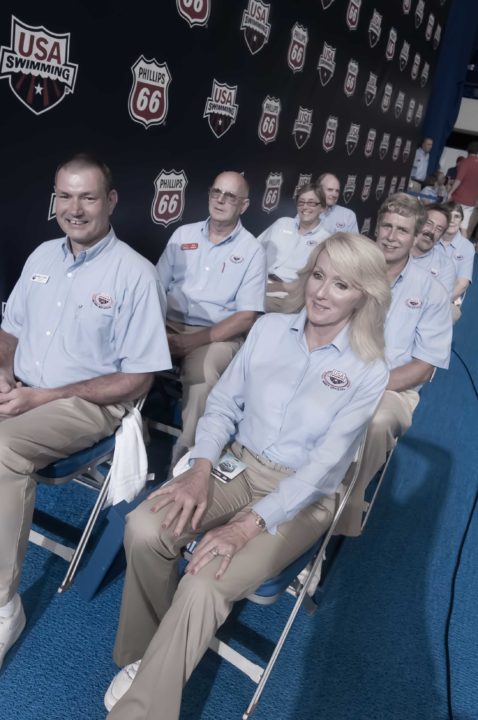 FINA has published a list of judges and referees who are approved to officiate international-level competition from 2021 through 2024. Stock photo via Mike Lewis/Ola Vista Photography

FINA, the international governing body for aquatic sports, has published its new list of international-level Swimming Officials that will serve from January 1, 2021 through December 31, 2024.

The list includes 482 officials from 126 nations. Australia, Denmark, and France lead the list with 6 officials each, followed by a slew of nations with 5 officials each. Among those with 5 officials include swimming power nations like the United States, Sweden, South Korea, Italy, Germany, Great Britain, China, Canada, Spain, Netherlands, South Africa and Brazil, along with other nations with lesser swimming reputations, like Iraq, Saudi Arabia, Nepal, Sri Lanka, and Cyprus.

Puerto Rico, which is part of the United States but maintains its own Olympic committee, has qualified 4 officials, while Guam has qualified 3 and the US Virgin Islands 1. That means that when divided by political boundaries rather than Olympic boundaries, the United States has 13 total certified officials. Hong Kong, which holds similar status with China, is sending 5 officials to bring the Chinese total to 10, while Bermuda (1) and the Cayman Islands (3) add to the British total to make 9. Aruba’s 3 give the Netherlands a total of 8 officials.

Only 82 of those 488 names continue on to the more recent list.

Ignoring what appears to be an incorrect listed date of birth for one Egyptian official (he would be 8 years old), the youngest official on the list is Tajikistan’s Karina Klimyk, who turned 21 in December. The oldest is Barbadian referee Sonia Juanita O’Neal, who turned 69 last week. 27 of the named officials are younger than the age of 30, while 78 of the named officials are older than the age of 60.

Number of Officials per Federation

Good luck to all the officials- I am a sports official. It can be hard stressful work, there area lot of rules to learn and keep on top off…..lots of travel and little thanks.

What does the category mean? R or S ?