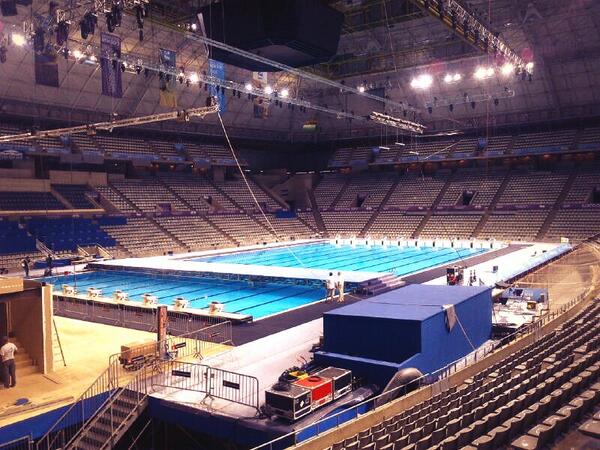 Elvis Burrows from the Bahamas, and the University of Kentucky, shared this picture of the pool for the World Championships.

The hosts of the 2013 FINA World Championships, which begin on Saturday, July 20th, invited over 1,000 swimmers, aged 55 or older, to inaugurate the pool at Palau Sant Jordi for the official opening of the facility.

The multipurpose arena can hold up to 12,000 spectators for the week’s aquatics events, and has previously hosted the Athletics (track & field) World Championships in 1995.

As the Americans prepare to gather in Washington, D.C. and then depart for their camp in Bilbao, Spain on Friday, the first athletes arrived in Barcelona and were able to check out the pool.

The above picture was shared by Elvis Burrows, a member of the Bahamian swim team, when he first caught glimpse of the pool on Monday.

I may be alone with my views on this but, in my book, swimming should be hosted at a venue which is meant for swimming. It allows spectators to sit closer to a pool which in turn helps creating the good atmosphere. It was so beautiful in Rome:

I’d also say that an optimal size for swimming venue is a little bit smaller than for many other sports. Swimmers are in water, “hiding”, so it’s important to be a bit closer.

This is maybe a bit controversial argument but I’d also say that “sold-out” headlines are excellent way to promote swimming. On the other hand, there is nothing more… Read more »

After world champs in Rome 2009, FINA ruled all world champs from then on had to be indoor. Because if you were in Rome, you remember that it was miserably H—O—T.

Now I must ask if you’ve proof of this ruling? I tried to search it a bit but couldn’t find anything.

Aswimfan, the 1992 venue (http://en.wikipedia.org/wiki/Piscines_Bernat_Picornell) only held 3,000 spectators. If I recall correctly, I think they used a temp pool at Palau Sant Jordi for the ’03 Swimming Worlds as well and used the ’92 pool for diving.

Plus, there’s the weather issue.Not being fond of stupid-hot weather (which is what you get in Spain this time of year), I think I’d prefer an indoor venue if I were a competitor.

Yes, you are right on all accounts.
I was only reminiscing of my first olympics swimming competition that I watched live on TV.

ah, so it’s the indoor arena.

dunno why I thought they’s host it in that beautiful 1992 olympics swimming venue. just a Wishful thinking.