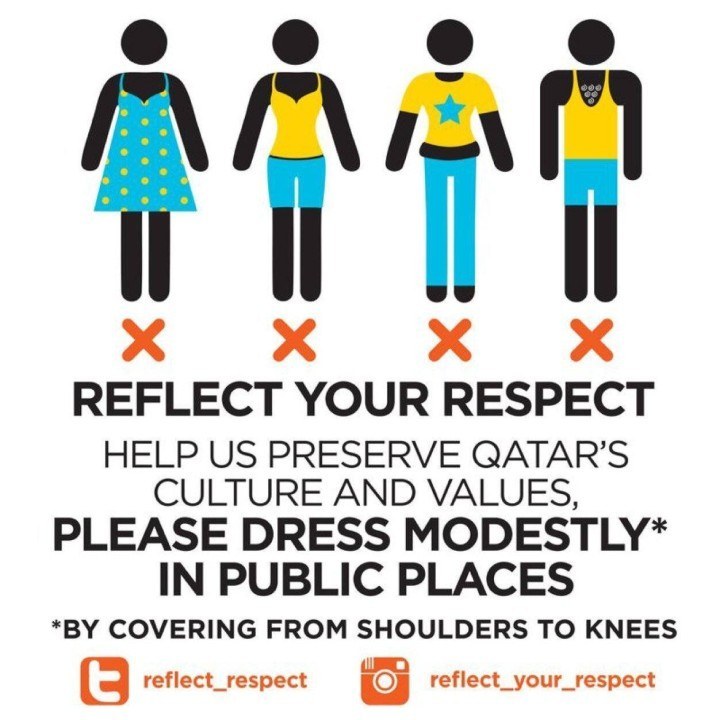 The above is one of many pieces of marketing material for the "Reflect Your Respect" campaign that has been posted around Qatar. Archive photo via Qatari Government

FINA has posted an “advisory” for dress at the 2014 FINA World Short Course Championships. They pointedly advised extra care during the Holy Month of Ramadan, that just finished.

Specifically, FINA says that while “women are not obliged to cover their hair,” that “it is not appropriate to show too much skin in other public areas.”

They did specify that these guidelines don’t apply to “hotel beaches”. Presumably, the restrictions will not extend to the aquatic facilities either.

Qatar, while maintaining close ties to the United States, is a country that is predominantly Muslim, and one of the most conservative countries in the world.

The release by FINA, written in mid-June, is part of a larger campaign within Qatar as they are due to host more-and-more tourists in the coming years, including a future soccer World Cup. The campaign is built around “Reflect Your Respect.”

The FINA release is below:

Men and women should dress modestly as a courtesy to both Qataris and Muslims. Swimsuits and beachwear are acceptable at the hotel beaches (don’t forget sunscreen), but it is not appropriate to show too much skin in other public areas. Tops should cover the shoulders and upper arms, and skirts or shorts should fall to or below the knee. Women are not obliged to cover their hair. Visitors should be thoughtful of their clothing particularly in the Holy Month of Ramadan.The extreme heat and high humidity of summertime means light-weight fibres are advisable (clothes made from ‘wicking’ – high techpolyester – material are invaluable); covering up susceptible parts of your body whilst outside they will also prevent sunburn. However a jumper or wrap may be needed inside malls, cinemas and restaurants, as the air conditioning can be fierce. Wintertime can be chilly, especially in the evenings, and there is also a chance of rain, so coats and closed shoes will be useful.

I think it is atrocious to follow these rules.
If the normal suits swimmers use is against their rules, why they are hosting???
Let s everyone be naked with a painted burqa in our bodies!–>sarcasm mode off

“They did specify that these guidelines don’t apply to “hotel beaches”. Presumably, the lifted restrictions will extend to the aquatic facilities too.”

I think they are saying at the actual swim facilities, you can wear whatever, but out and about they asking them to be respectful of the culture. It’s not mandatory, just a request so I don’t really have a problem with it.

Though, it does seem like #3 is saying no muffin tops.

As the article shows, this advisory does not apply to swimming facilities.

Most recent reports on Qatar and their World Cup preparations and struggles are not sounding very good. I’m not completely opposed to respecting the cultural (or even religious) sensitivity of a place. For the athletes, it’s good to be an ambassador of goodwill and not just fight every little restriction you find unfair. But the issues with this country run deep – including slave labor and dead migrant workers.

Qatar is where much of the funding for the expanding Islamic State (in Iraq and Syria, check out the beheading videos on youtube) comes from. The CIA and US military operate a couple of bases there. Lets look at some trends:

There are allegations of bribery of FIFA (international soccer) in both cases.

I hope FINA is not being corrupted in the same way FIFA has been, with cold hard cash. It is even worse the swimmers (especially women) have to worry about possible dress code violations which could result in exremly harsh punishment or cause international incidents.

Is this a joke? Nearly every swimmer you see at a summer meet is donning tanks and short shorts (males and females alike) outside of the pool. Good luck getting them to comply with this “dress code”. Why host? It’s 2014 people.

Why wouldn’t you respect a country’s culture – especially if it’s not that intrusive? Adding more fuel to the “Ugly American” fire is just dumb. Wear what you want for 355 days a year but don’t be a jerk in another country just because you can. Beat everyone in the pool but show respect out of it.

Well I find it quite ridiculous that they would “suggest” that the guests whom they are hosting to completely alter their way of dress (especially in the deadly head of Qatar). I don’t care what your culture is, countries that host these events should be embracive of the many cultures of their guests, not enforce their own ideologies upon them.

And can’t you read between the lines here, this is clearly directed at women. So I’m left wondering why FINA would award this type of event to such a chauvinist, discriminatory nation that still considers women to be second class citizens.

My thoughts as well, Dave.