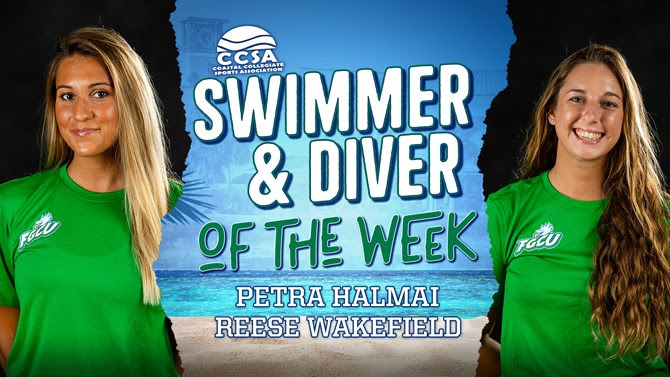 The pair has kicked off the year with its third career sweep of the weekly honors, having done so twice last season (2019-20). Current photo via FGCU Athletics

ATLANTA – Following their first weekend of competition, senior Petra Halmai (Dombovar, Hungary/Lanczos Kornel Secondari Grammar School) and sophomore Reese Wakefield (Guelph, Ontario, Canada/Bishop Macdonelle CHS) have been named the CCSA Swimmer and Diver of the Week, respectively. The announcement, which was made Tuesday afternoon by the league office, comes on the heels of a very successful weekend for the FGCU Swimming & Diving team (0-0), as the program won the first-ever FGCU Invitational.

This marks the third time that the duo has combined to win the weekly awards, having done so twice during the 2019-20 campaign. Halmai and Wakefield were also named last season’s CCSA Swimmer and Diver of the Year.

“The CCSA had one of its best weeks of competition this past week,” head coach Dave Rollins said. “There were countless school records and personal best time/scores achieved all over the conference and numerous athletes were deserving of these awards. To have both Reese and Petra recognized is humbling. Congratulations to them for their achievements in the pool and on the boards. It is an exciting moment to get the season started this way, and we as a program are excited about what is yet to come.”

Wakefield, who set the conference record last year when she collected seven weekly diving awards, continued to build off the success that she had during her rookie campaign. She was the highest-placing diver for FGCU in this weekend’s competition and qualified for zones on both the 1m and 3m boards. Her score of 305.10 on the 1m board earned her fourth overall and though she finished the 3m event in the ‘B’ final, her score of 301.15 would have been good for an additional fourth-place overall finish.

The Eagles finished atop of the team standings in this past weekend’s FGCU Invitational, as their 1,420 team points bested second-place FIU (994) and third-place Georgia Southern (712). As of Monday, CollegeSwimming.com has the Green & Blue as the No. 14 program in the country in its championship rankings. FGCU will now break for the end of the fall semester and will not return to competition until Jan. 13, when the team is slated to host Miami at the FGCU Aquatics Center. Details for that meet will be released as they are finalized.