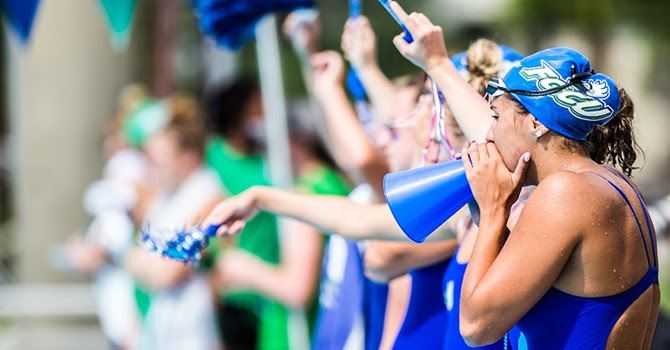 Hosting its annual Green-Blue Scrimmage, the FGCU women's swimming and diving team kicked off its season against each other on Saturday with the Blue Team winning, 226-205. Current photo via FGCU Athletics

Hosting its annual Green-Blue Scrimmage, the FGCU women’s swimming and diving team kicked off its season against each other on Saturday with the Blue Team winning, 226-205.

Among the 17 events held, 10 different meet records were made, including Elizabeth Zeiger (Cumberland, Rhode Island), who broke two meet records, and Doris Eichhorn (Berlin, Germany), who also broke a pair of records.

“The Green-Blue Scrimmage is an excellent opportunity for our team to work on comradery and build a lot of team spirit,” said head coach Dave Rollins. “We competed in a lot of different events that we don’t normally swim throughout the season, and it is a lot of fun to see us race in a different capacity. Overall, it was great seeing so many meet records get broken and witnessing the improvement our team has had from last year to this year.”

The Eagles will begin the regular season on Friday, Oct. 6, at 4 p.m. in a two-day event against Rutgers at the FGCU Aquatics Center.

IRMA RELIEF DONATIONS
In the wake of Hurricane Irma, many individuals and families throughout Southwest Florida are still in desperate need of assistance. To aid in those relief efforts, FGCU Athletics will be collecting donations at all Eagle home games for the immediate future, beginning with both of this weekend’s women’s soccer matches. Donation items most needed include: non-perishable food, clothing, household items and first-aid supplies. Additionally, those unable to attend upcoming home games can drop off donations in canisters located in the Alico Arena lobby. All donations will be given to those hardest hit in Lee and Collier counties.

HEAD COACH DAVE ROLLINS
Entering his second season at the helm of the Green and Blue, Dave Rollins became the FGCU head coach on Sept. 1, 2016. In his first year with the program, Rollins led the Eagles to its eighth CCSA Championship in a span of nine years and guided the Eagles 200 free relay team to All-American honors. FGCU registered points at the NCAA Championships for the fourth straight season and ultimately turned in its third-best finish all-time (T-41st). Prior to FGCU, Rollins was the associate head men’s swimming coach at The Ohio State University and brought 10 years of coaching experience at the club, high school and collegiate levels. A standout collegiate athlete in his own right, Rollins was a nine-time NCAA All-American and national champion as a member of the University of Arizona swimming & diving team from 2002-06.