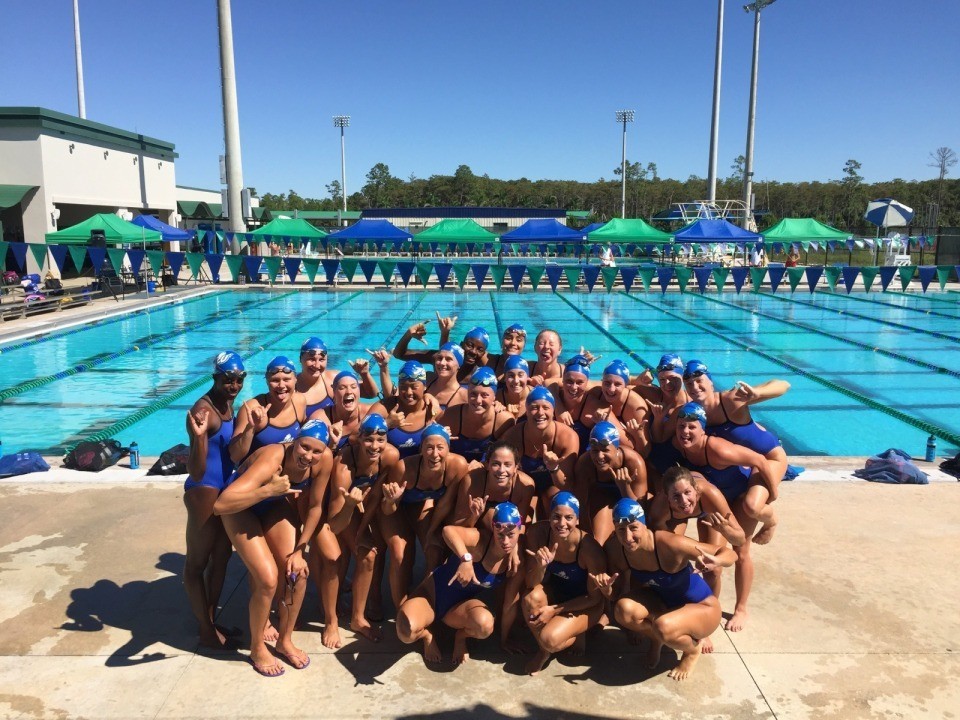 The Florida Gulf Coast women extended their winning streak against southern-Florida foes Miami to four straight years on Saturday, topping the hurricanes by a score of 195-104. Since a narrow 3-point victory in the 2011-2012 season, each year has seen a bigger-and-bigger margin of victory for the Eagles.

Early on, it looked like this would be a back-and-forth affair. Miami, in fact, won the first two individual events, starting with Cameron Davis, who swam a 10:14.71 to win the 1000 free by six seconds. She was pushed early by FGCU’s Lani Cabrera, but Cabrera is swimming in her first dual meet of the season after recovering from a concussion and hasn’t quite built her base to where she could contend on the back-half of the race. She faded to 3rd, ten seconds back.

Miami got another win in the next event, the 200 free, when freshman Julie Suarez swam a 1:54.16 to beat out FGCU’s Devon Robins (1:54.92). The Hurricanes took 2 out of the top 3 spots in that race to pull within one point of the Eagles.

That was as close as things would come though, as FGCU ran off wins in four straight events, highlighted by a 53.64 in the 100 yard backstroke from All-American Kira Toussaint her best time of the season by a full second, and enough to push her into the top 10 in the country so far this season.

After the sprints were done, Toussaint won another race taking the 200 backstroke in 1:59.70.

Freshman Katie Armitage swept the breaststrokes with a 1:04.35 in the 100 and a 2:19.60 in the 200. In the 100, teammate Evita Leter was just a tenth back. That’s going to be an ongoing story-line for this team all season as the two battle for spots on the FGCU medley relays.

Davis won again in the 500 free in 5:01.95, but this time was nose-to-nose with FGCU’s Nina Schiffer who took 2nd in 5:02.09. Schiffer looked content to sit right on Davis’ hip for most of this race, but left herself a touch too much ground to take up, despite having a very good last 50 of 28.79. The difference for Davis in the race was the willingness to ride her initial surge of speed longer than Schiffer did before settling into her 500 rhythm,

FGCU, however, charged back in the 200 IM. Though many of the swims were exhibitioned and didn’t count for points, they had the 8 fastest finishers in the race according to official results, with a win from Yee Wong (2:06.76).

The meet ended as it began, with another FGCU relay win, though this one was much closer. The Eagles swam a 3:30.17 to win by .99 over Miami; Miami had a 50.68 anchor from Heather Arseth, and FGCU didn’t have Svensson (she swam three individual events).

Florida Gulf Coast will head on the road for another major-conference test next Friday when they race South Carolina: a team that is on a similar rise as FGCU. Miami, meanwhile, will welcome in Illinois State.