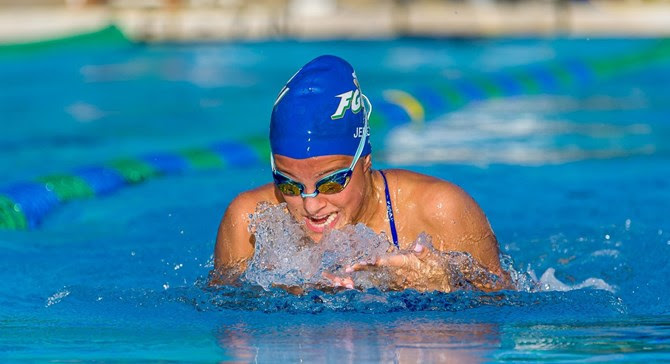 The FGCU swim and dive team makes its home debut on Saturday when they host the Commodores of Vanderbilt. Current photo via FGCU Athletics

FORT MYERS, Fla. – The FGCU swim and dive team makes its home debut on Saturday when they host the Commodores of Vanderbilt. Diving events will kick off at 11 a.m. while the swimmers will hit the pool at noon.

The Eagles opened the 2021-22 campaign a few weeks ago at the UNF Invitational where they took first place in the six-team event, which included fellow CCSA school Georgia Southern and the host Ospreys.

FGCU is the reigning CCSA Champions after winning its 10th title last February and will look for number 11 as they return 22-of-24 swimmers from last year’s squad along with two freshmen and two transfers. The Eagles also return six divers from 2020-21 along with one freshman.

At the UNF Invitational, the Eagles won 12 races, led by seniors Petra Halmai (Dombovar, Hungary/Lanczos Kornel Secondari Grammar School) and Wiktoria Czarnecka (Lublin, Poland/Liceum NR 10 W Lublinie), who each won two individual races. Halmai won the 50-yard breast and the 100 IM while Czarnecka swept the 50 (25.60) and 100 fly (56.90), both of which are the top times in the CCSA this season.

For her performance, Czarnecka was named the CCSA Swimmer of the Week.

In the relays at UNF, the Eagles claimed victory in six of the seven races on the day. After winning the 200-yard medley relay to begin the session, FGCU touched first in the 300-back relay, 300-fly relay, 300-breast relay, 500-free relay, and 400-medley relay as well.

For the Commodores, the season got started last week at Arkansas. Vanderbilt picked up a 142-118 win over Drury and dropped a 163-97 decision to the Razorbacks.

HEAD COACH DAVE ROLLINS
Head coach Dave Rollins is only the second coach in program history. He was hired Sept. 1, 2016 and owns a 34-22-1 (.609) dual meet record, which includes a 13-2 (.857) mark against CCSA opponents, in his fourth season. Rollins guided FGCU to back-to-back CCSA titles (2017, 2018), as well as the program’s fourth-straight title in 2018, marking the ninth championship in 10 years before winning the 10th championship in program history in 2021. In addition, he has been awarded CCSA Coach of the Year in two of his seasons at the helm. Previously, Rollins was the associate head men’s swimming coach at The Ohio State University. Rollins brings over a decade of coaching experience to The Nest, which includes helping to develop Olympians, NCAA Champions and All-Americans, along with multiple conference champions. A native of Brockton, Mass., he was a standout collegiate swimmer in his own right and was inducted into the University of Arizona’s Hall of Fame in 2017, as a nine-time NCAA All-American, national champion, school record holder and team captain.

#FEEDFGCU
FGCU Athletics sponsors events in November and April to benefit the FGCU Campus Food Pantry (www.fgcu.edu/foodpantry) and the Harry Chapin Food Bank (www.harrychapinfoodbank.org), FGCU Athletics’ charities of choice. For more information, including how to make a contribution, please visit www.fgcu.edu/foodpantry and utilize the hashtag #FeedFGCU to help raise awareness.

ABOUT FGCU
FGCU teams have combined to win an incredible 85 conference regular season and tournament titles in just 14+ seasons at the Division I level. Additionally, in just nine seasons of D-I postseason eligibility, the Eagles have had a combined 42teams or individuals compete in NCAA championships. Eight FGCU programs have earned a top-25 national ranking in their respective sport – including women’s basketball (No. 21, 2020-21), beach volleyball (No. 20, 2021) and both men’s soccer (2018, 2019) and women’s soccer (2018) as three of the most recent. In 2016-17, the Green and Blue posted a department-best sixth-place finish in the DI-AAA Learfield Directors’ Cup and top-100 showing nationally, ahead of several Power-5 and FBS institutions. In 2018-19, the Eagles had an ASUN and state of Florida best seven teams earn the NCAA’s Public Recognition Award for their Academic Progress Rate in their sport. FGCU also collectively earned a record 3.50 GPA in the classroom in the fall 2020 semester and has outperformed the general University undergraduate population for 24 consecutive semesters. The 2019 Fall, 2020 Spring, 2020 Fall, and 2021 Spring semesters each saw another milestone reached as all 15 programs achieved a 3.0-or-higher team GPA in each. The Eagles also served an all-time high 7,200 volunteer hours in 2017 – being recognized as one of two runners-up for the inaugural NACDA Community Service Award presented by the Fiesta Bowl.