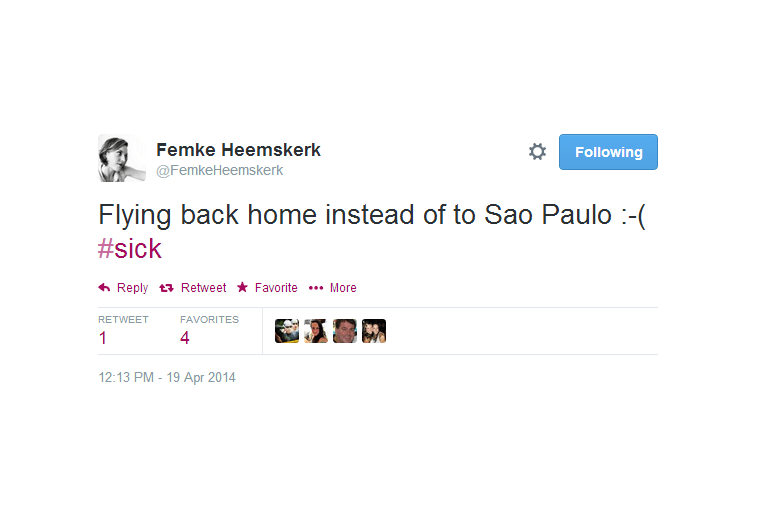 Dutch swimmer Femke Heemskerk has turned around and flown home in the middle of her trip to Sao Paulo, Brazil for... Current photo via Twitter

Dutch swimmer Femke Heemskerk has turned around and flown home in the middle of her trip to Sao Paulo, Brazil for the 2014 Maria Lenk Trophy, according to her Twitter account. The Tweet above claims that she has an undisclosed illness, and won’t be participating. That means that the Minas Tenis team will be without a swimmer who has represented them at national championship meets for the last couple of years, and this could perhaps hand Corinthians the team title.

Despite the club Pinheiros taking legal action against foreigners at Maria Lenk, each team is allowed to have two scoring swimmers on their roster toward the highly-coveted team trophy. The gist of their complaint seemed to involve the fact that the foreigners were in the country on tourist visas, not work visas, and so couldn’t be paid for their services.

The reality is that Pinheiros has little chance at a team title against powerhouses like Corinthians with soccer players who can afford to pay foreigners to compete under their flag.

At any rate, Heemskerk’s loss will be a huge blow for the defending champions Minas Tenis. In a country and on a continent where women’s swimming is historically very weak, these female imports can score huge points, especially when it comes to the bonus points scored for being faster than National and Continental Records. Heemskerk was likely the only chance that Minas had to counteract Corinthians’ duet of Katinka Hosszu and Jeanette Ottesen.

As far as anybody can tell, Minas Tenis will still have the services of Inge Dekker, but Heemskerk last week set the Dutch Natinoal Record in the 200 IM, and so was swimming well.

Now, Corinthians is lined up to win their first team title since 1966 after daces of domination by Pinheiros, Flamengo, and Minas Tenis.

What kind of legal action could they possibly take? Any way you can specify?