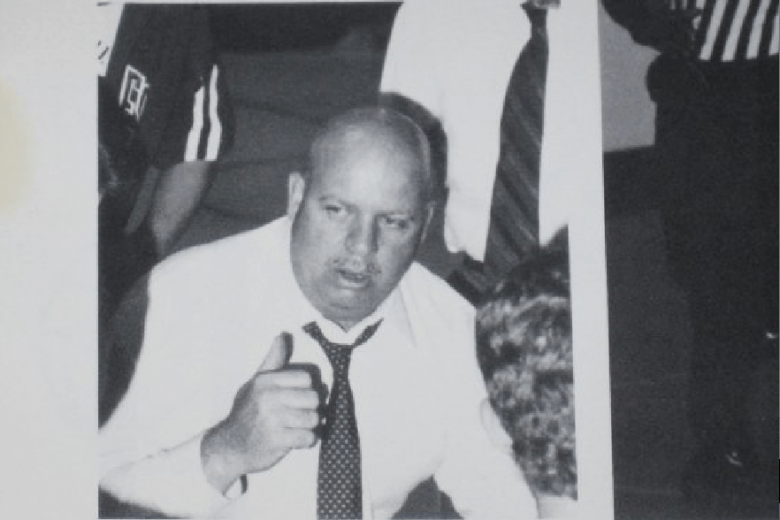 GOLD MEDAL MEL: My dad was a swim-parent & he coached basketball.

“Dad, what’s it like to be so ugly?” I asked. I was about 6 when I landed that question on him. He was standing in front of the bathroom mirror, a towel miraculously tied around his bountiful belly, perfectly round from fried eggs, fried bacon, fried steak (fried everything), shaving his face and his bald head at the same time.

“Little Melvin…” I was Little Melvin. He was Big Melvin. “Little Melvin, “ he said out of the corner of his mouth as he contorted his face, dragging the razor from his earlobe across his cheek, “I just don’t look so much in the mirror anymore. That’s what you do when you start looking the way I do.”

Dad was ugly inside my six-year-old head, certainly no Johnny Weissmuller from the black and white Tarzan movies I religiously watched on Sundays, but everybody, and I mean every single body, loved him anyway.

Dad never took offense. He was sweeter than sweet. I grew up in an age where spanking was the norm, but he was terrible at it. He’d either breakdown and cry, or just lose his nerve and then fake it so mom would think I got the punishment I well deserved.  These moments were usually followed by trips to the ice cream shop where dad would try and reason with me about right and wrong, and he was good at that.  He had a way of making the complex simple.

Dad wasn’t a man anyone would accuse of being intelligent. He had wisdom, though, an understanding of people borne of the deepest compassion. He was the son of an alcoholic, a man who was violent at times, and scary more often than dad cared to explain.  Dad’s dad, my grandpappy, went to prison, but the details of why have blurred over the years and family mythology.  I think alcoholism may have been the catalyst.  A long story short, dad carried a lot shame, a lot that wasn’t his, and he was slow to judge others when details were scarce and facts were few.

Swimming agreed with dad. He had a beautiful stroke, flexible shoulders and a long reach. I can see him swimming freestyle now. “Little Melvin,” dad would beam, wiping water out of his eyes and then slick off his smooth head, “I learned swimming in Appalachian streams in cold water that’d ache your bones, but if I had had a pool like you, maybe I could’ve been pretty good, too.” Dad said that a lot.

Dad drove carpool to practice and sat through endlessly long days at weekend swimming meets. When I tried to quit (which was many times), he somehow managed to negotiate a deal that involved still making five practices a week.

I share a lot of swimming stories with kids, like most Olympians do. Often the talks are truncated to 5 or 10 minutes and dad gets edited out.  I always end looking into parents eyes, delivering what I hope will be the most important point: “The best thing you can do, the best support you can give…just love your kids. Let ‘em know that no matter what, win, lose or draw, no matter how awful they may swim, that you love them just the same.”

Dad loved me no matter what.

I made Junior Nationals at young age. If remember correctly, there were 49 swimmers in the 800 meters free. I got 49th, and the 48th swimmer beat me by nearly a minute. That was not a good day. Back home, dad took me to R.O.s BBQ for the best slaw in the wide world. It was a favorite of mine, and he sat and told me a blow by blow account of when I was born, about the sounds and the endless cries and that holding me for the first time he was certain I’d play baseball and basketball and fish with him every day.

“Melvin Jr….” I was Melvin Jr. by the time I was thirteen. “Melvin Jr.,” he said, “I knew we’d do all of those things, but I never knew you’d be a swimmer, and a great one at that. Still, if you never win a race again, if you get last place every time, I will love you just the same.”

Dad said what he said so many times over the years, all the way up until I retired.  Everyone remembers the wins, but the losses are always far more frequent. A parent’s love is all that matters when there’s no gold medal or blue ribbon after the event.  When I did win, dad’s hug was the same as when I lost. Now, so many years after his death, I miss that most, being wrapped up in his assuring embrace, a feeling like being covered in big pillows.

The last loss, the one that retired me, came at the 1996 Olympic Trials. It was heart-wrenching, a 3rd place at the one meet where first is first and second is first, because you make the US Olympic Team. 3rd isn’t even 3rd. It is a long, slow walk to the diving well, and then an abrupt turn, realizing, I don’t need to warm-down. That’s the final coffin nail.

I fished with Dad five times between March and May after not making the US Team.  Not a lot was said. Nothing needed to be.

In late May I got a call to report for ESPN at the 1996 Olympic Games. I think I was more excited because I knew dad would be.  When someone dies, someone you love, you usually have a few crisp clear images of them in your head. For me, one is of Dad walking up and down this narrow office space ESPN used as their HQ in Atlanta. One of the producers gave dad an extra, extra large ESPN T-shirt, which he immediately pulled over his yellow Penguin shirt. Dad wasn’t wasting one second. He was enjoying the swag right then.  The image I hold in my head of him, it’s of dad looking around, then looking at me, his smile so broad it appeared his had two packs of hotdogs folded back by his cheeks.

Happy Father’s Day to all of the supportive dads and swim-parents.

Thank you for sharing this with us.I lost my father on Father’s Day last year and I appreciate what you said about your father.Nice to know they are both up in heaven looking down on our young swimmers today.My father insisted on wearing a picture of his granddaughter the swimmer around his neck, even while he was in hospice.We buried it with him.He was trying so hard to get better so he could see her swim in London… we are struggling to get tickets to watch, but he will have one of the best seats in the house.You had mentioned your father to me before, didn’t realise until I saw this picture that I had met him before.He was a… Read more »

What a beautiful memory and thank you for sharing. On this Father’s Day, as I read the proverbial hand made cards from my little girls once again (or is it the 10th time?), I can’t help but think of the circle of life. My Dad was the one who calmed my fear of the water, the one who was there for my first junior cut as well as my last loss. And now, it is we, the sons and daughters, who are caring for them. Kinda their last go-round of the summer season. Happy Father’s Day,

Wow.. what a fantastic article and tribute to your father. Thanks for the great swimming website as well. It has quickly become my favorite swimming site

Great story, Mel! Your dad had it right. Thanks for sharing.

Phew, it just got dusty in here,

Best stories are always the most honest. This definitely qualifies. Thank you for sharing. Happy Father’s Day, everyone.

Swim Ma, Jonti, thanks for the Father’s Day stories…

Jeff, Prior, Junker23, thanks for taking the time to read…

Might be time to start thinking about a book.

I first met Big Melvin at Olde Georgetown club meets. A great organizer and fan of good swimming. Thanks for sharing. Congratulations to both of you, on your success.

Hi Skip… Thanks for saying hello!