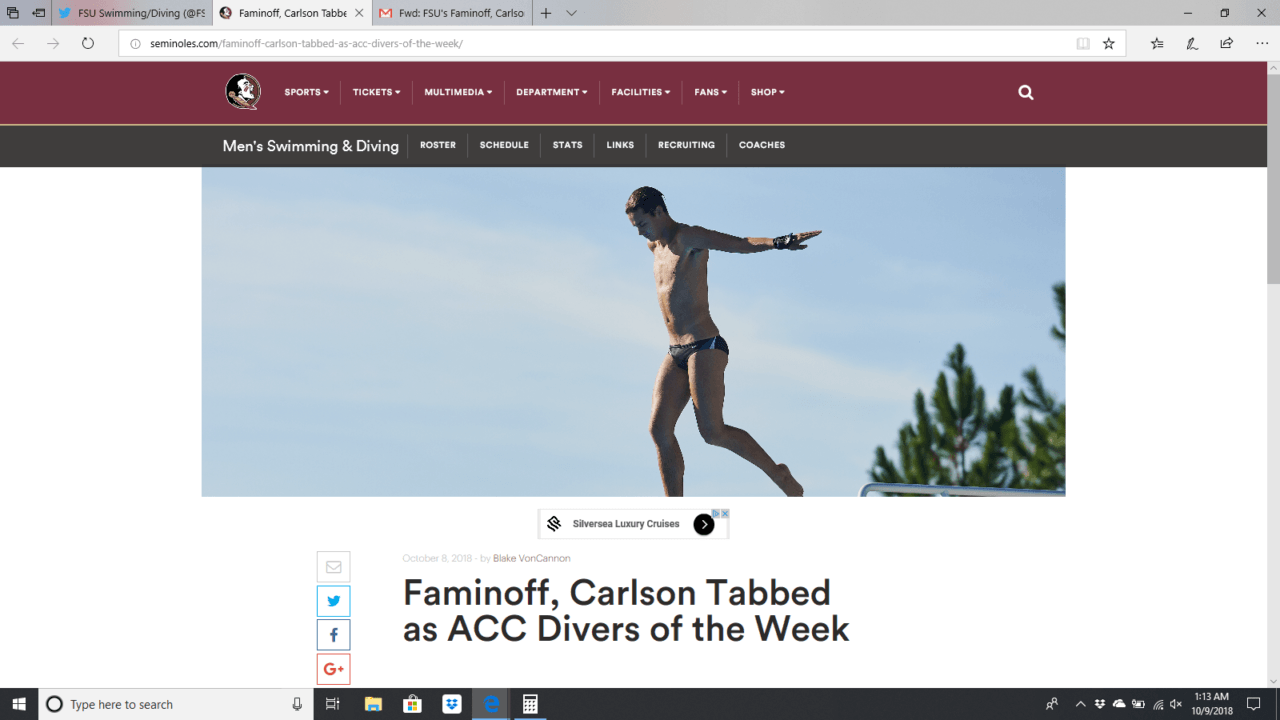 Florida State swimming and diving juniors Aidan Faminoff and Molly Carlson were named the male and female ACC Divers of the Week on Monday by the league office. Current photo via Florida State Athletics

TALLAHASSEE, Fla.   – Florida State swimming and diving juniors Aidan Faminoff and Molly Carlson were named the male and female ACC Divers of the Week on Monday by the league office.

“They did a really good job on Saturday,” FSU head diving coach John Proctor said. “They put in a good amount of work when we started back and I am very happy with where we are right now.”

Faminoff earns his first ACC Male Diver of the Week honor of his career after a first and fourth place finish on the boards Saturday against ACC foes Georgia Tech and Pittsburgh.

The Victoria, B.C., native earned his first career springboard victory as he won the 1-meter with a score of 311.65, edging out Matt Casillas of Georgia Tech.

Faminoff would follow up his victory by placing fourth in the 3-meter with a score of 306.00. His 306.00 score placed 20.55 higher than the next competitor and was among three Noles who finished in the top four in the event.

Carlson shined on the boards against GT and Pitt on Saturday, earning her first ACC Diver of the Week award of the 2018-2019 season.

On 3-meter, Carlson was the lone diver that scored above 300, earning a final score of 321.60. Her performance landed her 26.35 points above second place finisher Cami Hidalgo of GT.

Carlson would follow with a victory in the 1-meter, placing a score of 299.85. In finishing 11.95 points above second place in the event, Carlson would sweep the women’s competition by a combined 38.3 points.