EVANSTON, IL – The Evanston Masters hosted their first National Relay Records Meet this past Saturday, April 28, 2018 at the historic Evanston Township High School pool, which was built in 1958.  Two relay teams geared up to smash a total of six National USMS records.  Leading the onslaught was the Illinois Masters team in the Men 85+ category comprised of Wayne Leengran (85), Stephen Mullins (85), Thomas Banfield (87) and Richard McClow (87).  The quartet set an impressive four records in less than two hours in the 200 Yd Medley Relay in 3:25.12, the 200 yd Freestyle Relay in 2:44.23, the 400 Freestyle Relay in 6:29.51 and the 800 Freestyle Relay in 14:58.86.  The relay team broke new ground in that previously records had been established for only the 200 Freestyle Relay and the 200 Medley Relay.  No team of 85+ had previously swum the 400’s or 800 relays.  The incredible feat by the four octogenarians was truly a beautiful and courageous display of both speed and stamina. 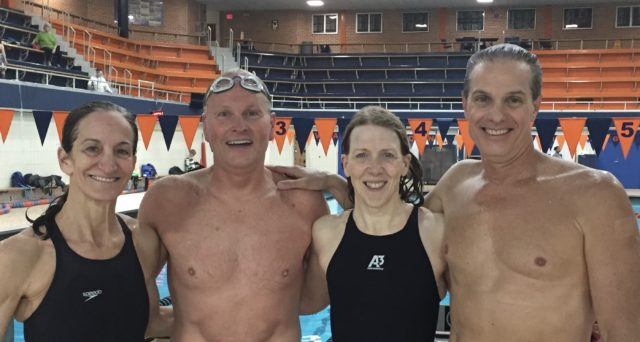 A second quartet of Illinois Masters broke two records in the Mixed 55+ category.  The team of Heidi Kafka (55), Andrea Block (56), Andy Seibt (60) and David Sims (55) smashed the Mixed 55+ 400 Yd Medley Relay by over 5 seconds lowering the record to 4:12.46.  Shortly thereafter, they teamed up again to obliterate the Mixed 55+ 800 Yd Freestyle Relay record by over 17 seconds with a time of 8:17.00.   “It is especially rewarding to be able to do this with your friends”, said Andy Seibt.  All four currently have been serving on the ILMSA LMSC Board and participate in USMS National Committees.  Seibt, Block and Sims train with the esteemed Fossil Fish team while Kafka is a member of the state champion team, Chicago Smelts.