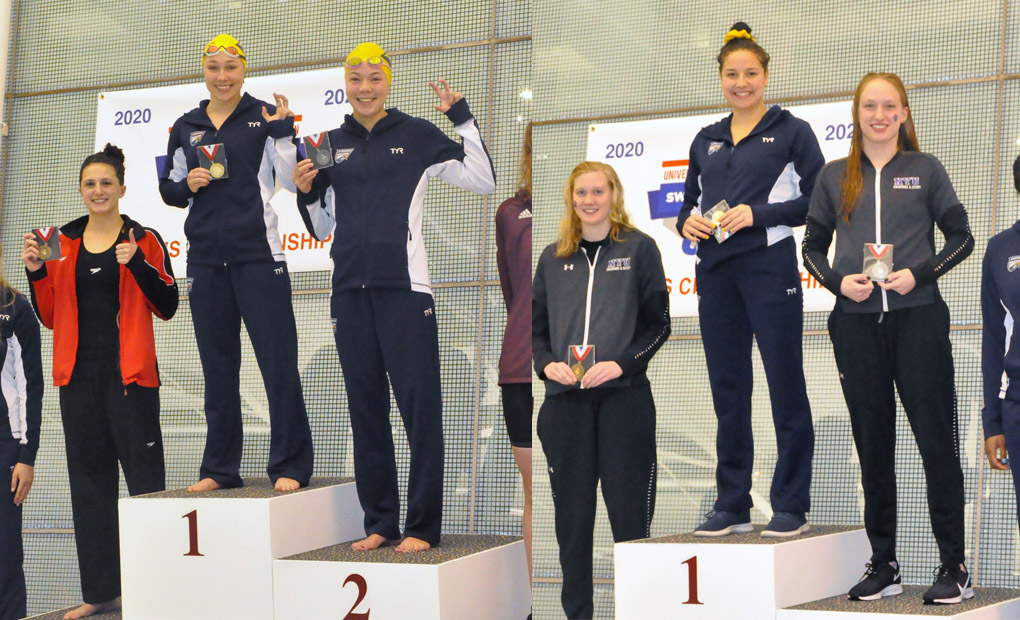 The Emory men got off to a 36-point lead through one day of competition, while the women are up by 7.5 over the hosts Chicago. Current photo via Emory Athletics

Bumgarner and Goudie captured the first event championships of the meet for the Eagles as Emory got off to a 36-point lead through one day of competition. In addition to the two event titles, the Eagles earned five All-UAA finishes as the team finished the evening with 493 points. New York University sits in second with 457 points while host Chicago is in third with 452 points.

Bumgarner opened the finals session with a stellar performance in the 3-meter dive as he defended his UAA championship. After setting the school record with a score of 615.60 in preliminaries, Bumgarner edged out Chicago’s Andrew Chen in the finals with a score of 599.10 compared to Chen’s 587.75.

Goudie collected Emory’s second win of the night in the 50 Freestyle as he tied Chicago’s Jonathan Mendley as both swimmers touched at 20.42. The tie marked the first-ever in the event at the UAA Championships as well as Emory’s fourth straight win in the event.

The Eagles were denied two more conference titles on the evening with a pair of races ending in dramatic fashion. First, sophomore Pat Pema was overtaken by NYU’s Graham Chatoor during the final 25 yards of the 500 Freestyle. Both swimmers clocked in ahead of the 18-year-old UAA record, but it was Chatoor winning by .63 seconds at 4:24.34 over Pema’s time of 4:24.97. In the 400 Medley Relay, Goudie was out-touched right at the wall as Chicago’s Arthur Kiselnikov was able to give the Maroons the win by .09 seconds over Goudie, senior Sage Ono and sophomores Tyler Russell and Hwa Min Sim.

Rounding out the All-UAA performances for the Emory men Thursday night was the group of Goudie, Ono, sophomore Colin LaFave and junior Chris Nicholson who took silver in the 200 Freestyle Relay with a finals time of 1:20.69.

Led by three conference titles on the first night of swimming events, the Emory University women’s swimming and diving team was able to build a narrow lead at the University Athletic Association Championships in Chicago, IL.

Through two nights of events, the Eagles hold a slim 7.5-point advantage in a tightly contested conference championship meet. The Eagles lead the field with 504.5 points followed by the host Maroons at 497 points with NYU in third at 482. Emory as a team collected three UAA event championships and seven All-UAA finishes Thursday evening.

The night session began with the Eagles earning the 200 Freestyle Relay title with sophomore Taylor Leone, freshman Caroline Maki, junior Lucy Daro and senior Caroline Olson combining for a winning time of 1:33.06. The win is Emory’s eighth consecutive in the event.

Senior Maria Turcanu followed with her repeating at the UAA champion in the 500 Freestyle. Turcanu went wire-to-wire in the championship final, winning by over three seconds at 4:54.75. It is the seventh straight year an Eagle has won the event and the 12th out of the last 13.

Leone secured Emory’s third win of the night as she captured the title in the 50 Freestyle, throwing down a finals time of 23.47. It marked Leone’s first-ever individual conference event title and was the Eagles’ 11th consecutive in the event.

Sophomores Clio Hancock and Josie Uerling tallied All-UAA finishes in the 200 IM with Hancock earning silver with a time of 2:03.62 while Uerling took bronze at 2:04.24. Adding All-UAA honors on Thursday was Maki in the 50 Freestyle, taking silver in a time of 23.58, and the 400 Medley Relay team of Olson, Maki, sophomore Edie Bates and freshman Savannah Sowards who placed second at 3:47.05.