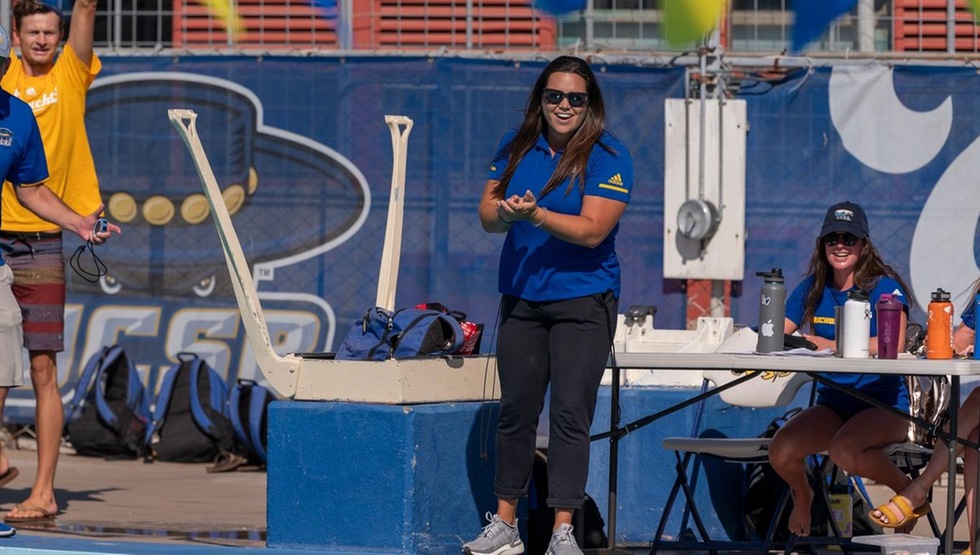 SANTA BARBARA, CALIF. – UC Santa Barbara men’s and women’s swim coach Ellie Monobe has been promoted to a new role as associate head coach, as announced by head coach Matt Macedo. The promotion comes during Monobe’s fourth year with the team in what has been a strong start to the season. The men’s team is a perfect 3-0 in dual meets while the women sit at 2-1, and both teams have won first place at each of the three invitationals in which they have competed.

“Ellie has positively impacted this program in so many different ways,” said Macedo. He specifically referenced the huge role Monobe has played in ramping up recruiting, social media presence, and the athletes’ focus on academics, as well as creating and delivering excellent junior days. Macedo testified, “Ellie has coached at the highest level, highlighted by Billy Mullis’ 17th place finish at the NCAA Championships in 2018. She has been the primary coach of numerous school record holders and has elevated our mental training and team building events that are crucial to the team’s success in and out of the water.”

Monobe appreciates the opportunity, saying “I am grateful for the opportunity to elevate my impact on this already tremendous program.” She continued, “This could not have been possible without the continued support of [Macedo] and deputy athletic director Kelly Barsky. I look forward to working towards our team goals as we head into our championship season.”

Monobe arrived at UCSB for the 2017-18 season and has been an integral part of the staff since, predominantly responsible for the stroke/mid-distance and distance groups. In her time at Santa Barbara, Monobe has helped coach the men’s team to back-to-back MPSF Conference Championships and the women to MPSF Runner-Up performances in the 2016-17 and 2017-18 seasons. She has coached 31 MPSF champions and has been instrumental in helping break 20 UCSB men’s team records in addition to seven women’s team records.

Prior to coming to UCSB, Monobe had previous college coaching experience at University of Massachusetts during the 2014-15 season and UNLV in 2015-16. While at UMass, Monobe trained breaststrokers and the IM group. At UNLV, she focused on training the IM and sprint groups and helped lead the men’s team to NCAA Championships where they tied for 35th place. Monobe also spent time as a graduate assistant at San Jose State and an undergraduate assistant at her alma matter, Cal.

“I continue to learn from Ellie and appreciate her passion for the sport. She is so deserving of this title and I thank her for all she has done since her arrival at UCSB,” Macedo said.