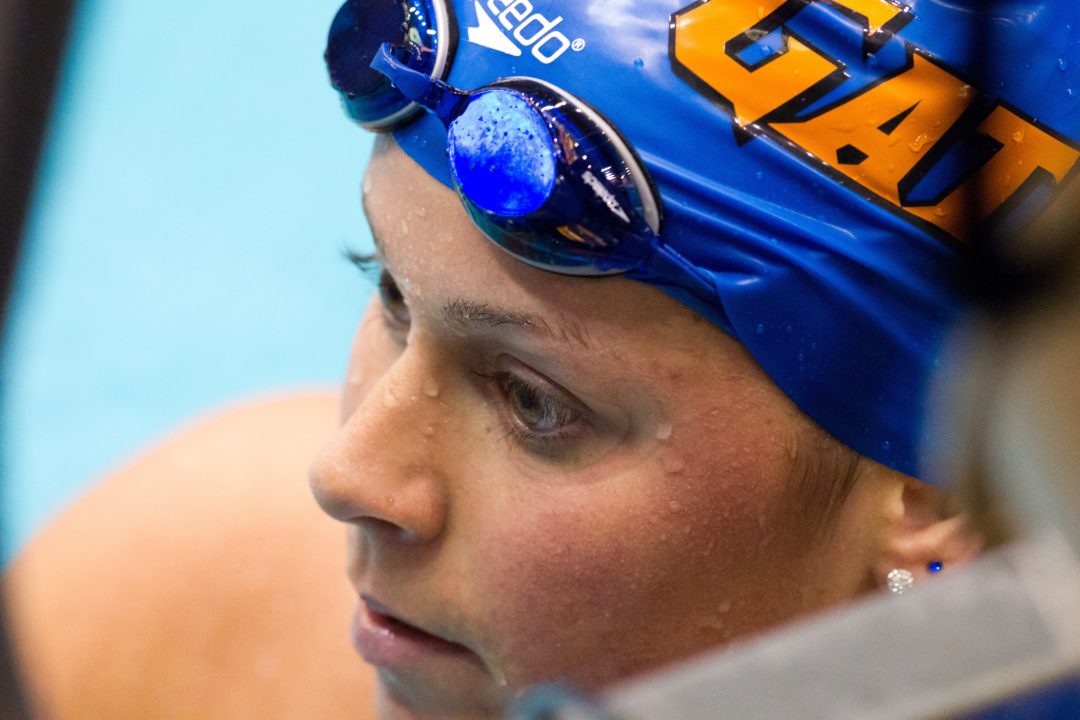 Olympian Elizabeth Beisel has rarely been as fast in-season as she was in Columbus over the weekend. (Photo Courtesy: ©Tim Binning/TheSwimPictures.com)

The Florida women won a lot of races, showing an unusual level of freshness and vigor for a mid-season Gregg Troy meet, but Stanford was able to use depth to keep the scoring close throughout. Almost every Meet Record was broken at the three-day Ohio State Invitational that ran Friday-Sunday, with teams throughout the meet (not just Florida) showing a propensity to swim best times mid-year.

It will be curious to see at the end of the year what comes from these mis-year improvements: if this is perhaps a reaction to new qualifying rules or perhaps an adaptation in training cycles after reviewing Olympic/Olympic Trials data and following trends around the country for these mid-year rests.

On day 2, the Florida Gators kicked the day off with a win in the 200 medley relay. This is a relay that in the past has relied a lot on 200-yard specialists to swim 50’s; though they still have a little bit of that, the squad is shifting more toward sprinters as they rolled to a 1:38.37 win. That included a 24.83 leadoff from Sinead Russell and a 21.92 anchor from freshman Natalie Hinds. Hinds, a sprinter in a distance-based program, has been fighting her way through workouts this semester, but if that split was any indication then things are clicking. The return of Aussie Ellese Zalewski (23.38 on the butterfly leg) will also be significant, after she missed NCAA’s last year for Aussie Trials.

Elizabeth Beisel gave the Gators a second-straight win thanks to a 4:00.61 in the 400 IM which is, by a full second, the fastest time in the country this season. This swim is one more piece to figuring out Gregg Troy’s puzzle this season, as all of his swimmers (both pro and collegiate) seem to be racing much fresher in-season than they normally do. Last year, as a sophomore, Beisel was no better than a 4:07 until the SEC Championships, and now she has an A-cut.

Maya DiRado of Stanford is in the opposite position, though under new coach Greg Meehan it’s not a surprise that their training cycles might change. She was 4:02 mid-season last year, but here only got to a 4:06.4. UNC’s Cari Blalock was a 4:07.51 for 3rd – that’s her best time by two seconds and a new UNC Record.

4th-place in that 100 fly went to Notre Dame’s Kim Holden in 52.98. That’s almost a full second personal best for her as well and crushes the old school record. As the Irish look to fill out a 400 medley relay that is maybe one star short of an NCAA top-8 finish, Holden’s ability to get to a 52-mid on a rolling start will help a lot.

The top 6 finishers in this race all broke the old Meet Record.

Stanford’s Andi Murez won the 200 free in 1:45.16 (though she was a better 1:44.83 in prelims) against a fairly lackluster field. Her freshman teammate Julia Anderson was 2nd in 1:45.64 and North Carolina’s Stephanie Peacock and Danielle Siverling were 3rd and 4th in 1:46’s.

The North Carolina 800 free relay has two very good legs in those above (depth in this relay goes a long way at the NCAA level, even without a Georgia-like 1:41 anchor), and with Katie Nolan and Carolyn Blalock swimming better in their other races they could move toward the top-12 at NCAA’s.

Notre Dame’s Emma Reaney broke another School Record for the Irish at this meet in prelims. Her 400 IM to open the day lopped 3.5 seconds off of the old standard, and in prelims of this 100 breast she swam a 59.38 to take a sliver off of Samantha Maxwell’s old record of 59.44.

With the 400 IM final coming much closer to this race than it does in prelims, Reaney couldn’t improve her record here in finals, but did swim a 1:00.04 to still take the win.

Though still struggling to pull away from Stanford on depth in the scoring column, Florida got a third win on day 2 thanks to a 52.80 from Sinead Russell in the 100 backstroke. That broke the Meet Record of 52.95 set by Stanford’s Maya DiRado in prelims, though DiRado scratched the final.

Her teammate Maddy Schaefer then ended up 2nd in 53.03, with Notre Dame’s Holden posting almost another best time in 53.07 for 3rd.

Stanford won this session-closing relay in 7:03.18, easily a new Meet Record, but the individual component times were just as interesting as the final result. Maya DiRado led off in 1:44.95, and was followed by sprinter Maddy Schaefer in 1:47.60. As much as Schaefer has improved in her sprints at Stanford, this 200 hasn’t developed the same way in college; vital information if Meehan plans to use her on this 800 free relay.

North Carolina’s Stephanie Peacock kicked off day 3 of the meet with a new NCAA Record in the women’s mile, touching in 15:37.06 to clear her 15:38.79 set in winning last year’s NCAA title (read more about the new record here). That’s not-too-shabby for her first mile of the year; she’s still relatively a novice in this distance, so there may still be more gains at year’s end even if just from learning more about pacing at each opportunity to race.

Florida’s British freshman Jess Thielmann cleared 16 minutes for the first time in her career; this is only her second career swim of this race, and she’s dropped now 47 seconds since the season-opening All-Florida Invite. Clearing 16 minutes in this race doesn’t seem like it will carry as much weight this season as it has in seasons past, but sitting third in the country brings the former junior star high hopes at a top-8 finish at NCAA’s.

Elizabeth Beisel took her 2nd win in as many days in the 200 back, where she’s the defending NCAA Champion, with a 1:52.00. She was one of four swimmers to swim Automatic Qualifying Times in the event (Stanford’s Maya DiRado was nipping at her heels in 1:52.52, and her freshman teammate Sinead Russell was 3rd in 1;:3.20).

Given how DiRado’s earlier swims in this meet looked, compared to how good she was in this 200 back, it seems likely that she will challenge Beisel for the NCAA title.

With another Florida freshman, Ashlee Linn, taking 4th in 1:53.56, the Florida Gators are developing a 200 backstroke group that is probably the second-most-impressive in the country behind Cal.

Stanford’s Maddy Schaefer swam a 48.36 to win the women’s 100 free that sits 6th in the country; There’s a big disparity so far this year from where the top two have been (Megan Romano under 47 on a relay, Margo Geer 47.1 on a flat-start) and the second level. Schaefer sits firmly in that next-tier of times alongside the likes of Kasey Carlson, Allison Schmitt, and Tiffany Oliver.

Another Notre Dame win and another Notre Dame record came in the women’s 200 breast, where Emma Reaney won easily in 2:07.60. She was one of the breakout stars of last year’s NCAA Championship meet, and taking this swim out in a 1:01.5 shows that she’ll be just that again.

UNC’s Cari Blalock didn’t go another best time in this 200 fly, but came close in what is her best event by swimming a 1:56.63 for the win. She closed in under 30 seconds, which is quick (as evidenced by the fast that nobody else in this field did so).

The Stanford women graduated a lot of great sprinters after last season, but they still look really good with three 48’s on their 400 free relay. That carried them to a win in 3:15.69. Freshman Julia Anderson was the other leg, in 50.0 has been a 49-mid in high school as well, so expect hers to come along at year’s end; she just looked a little bit tired as this meet wore down: not a surprise given it’s her first college season and her first big college meet.

Florida took 2nd in 3:16.82, which is already almost as fast as they were at NCAA’s last season (and with three of the four members changing none-the-less). With four 49’s on their B-relay as well (which finished third), the Gators will have a whole lot of options for filling out this group at nationals.

sorry guys – it’s hard for me to think ANYONE is taking the 200 back from Pelton at NCAA’s.

any recap for the men’s races?

Eventually. Would’ve been a huge post to put two days of co-ed racing in one article; am working on a men’s recap now. Not much college swimming for a while, have to pace ourselves :-).

Sounds good, no rush! I love reading your site’s recap. The national perspective in where things rank is really insightful.

There will be some impressive battles at the next women’s NCAA championships with Megan Romano vs Margo Geer in the 100 free, Megan Romano vs Allison Schmitt in the 200 free, Sarah Henry vs Stephanie Peacock vs Amber McDermott vs Allison Schmitt vs Shannon Vreeland vs Haley Anderson in the 500 free, Stephanie Peacock vs Haley Anderson in the 1650 free, Cindy Tran vs Rachel Bootsma in the 100 back, Elizabeth Pelton vs Elizabeth Beisel vs Maya DiRado in the 200 back, Cammile Adams vs Jasmine Tosky in the 200 fly, Breeja Larson vs Caitlin Leverenz vs Laura Sogar in the 200 breast, Caitlin Leverenz vs Elizabeth Pelton vs Elizabeth Beisel vs Jasmine Tosky in the 200 IM and Caitlin… Read more »

“Given how DiRado’s earlier swims in this meet looked, compared to how good she was in this 200 back, it seems likely that she will challenge Beisel for the NCAA title.”