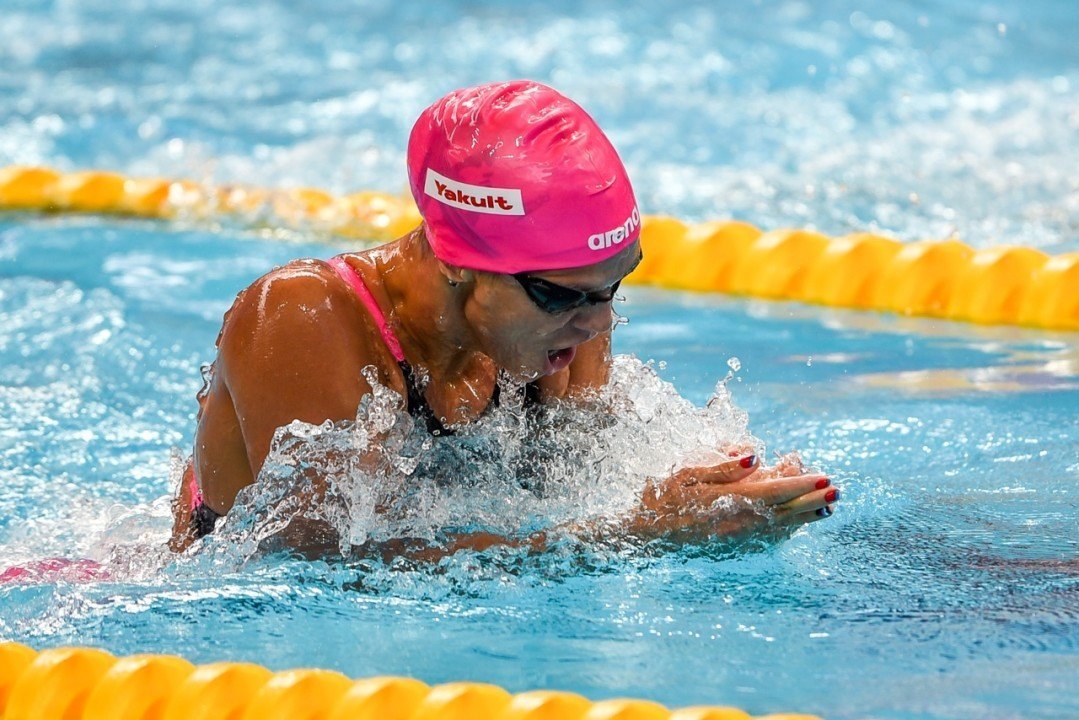 While provisionally banned Russian swimmer Yulia Efimova awaits her fate for having tested positively for the prohibited drug meldonium, the reigning 100m breaststroke World Champion's former coach is continuing speaking out on her behalf. Archive photo via Peter Sukenik/www.petersukenik.com

While provisionally banned Russian swimmer Yulia Efimova awaits her fate for having tested positively for the prohibited drug meldonium, the reigning 100m breaststroke World Champion’s former coach is continuing speaking out on her behalf.

In light of concentration information released concerning Efimova’s specific levels of meldonium, the swimming star’s former coach Irina Vyatchanina, who now carries World Junior Champion Viktoria Gunes (Turkey) under her tutelage, says that Efimova’s chances of being able to compete at the Rio Olympic Games are being ‘unfairly affected by FINA’.

After banning the drug meldonium, effective January of this year, the World Anti-Doping Agency (WADA) released a revision of sorts, clarifying that positive findings resulting in levels below one microgram of the heart medication detected in a test prior to March 1st, a no fault or negligence verdict could be reached.

Although nothing official has been released publicly that we can find, Vyatchanina told Russian news agency TASS that, “It is an established fact that the concentration of the substance discovered in Efimova’s doping sample was not exceeding the norm.”

As such, the coach questions why Efimova’s request to FINA for her temporary suspension to be lifted was not granted.  Says Vyatchanina, “It is not clear why the temporary suspension was not lifted or at least she was permitted to practice before the session of the FINA Doping Panel on May 30.”

“Yulia at the moment is even unable to practice normally. She had to return to Russia, to Volgodonsk. This is definitely a negative moment for the swimmer considering the fact that there is little time left before the Summer Olympic Games.”

In March, Vyatchanina lashed out at the media regarding her former swimmer’s specific situation, saying, “only doctors can be blamed for the situation with Yulia. They [doctors] were aware of the problem since last September. They should have done everything possible to get the drug out of the swimmer’s body system.”

However, Efimova is facing her second doping ordeal, as the swimmer previously served a 16-month ban from having tested positively back in 2013 for the steroid DHEA.

The overwhelming question is what was Efimova doing taking a drug used for acute myocardial infarcts (heart attack) and other ischemic heart diseases? The only answer is cheating by taking a PED. Mildronate helps blood flow and endurance.

This is the second time she was caught. If undeteced, she might have done damage to every other female 100M breaststroker, like Ruta Meilutyte, Alia Atkinson, Kanako Watanabe, and Katie Meili. One of these innocent girls could have been denied an Olympic Championship and/or Olympic medal. Doping is not a victimless crime.

She took it to gain a competitive advantage while it was legal and appears to have stopped when it was banned but some remained in her system. If the sample was indeed less than the norm she’ll be swimming in Rio.

Braden has one of the few objective articles on Meldonium around . . I suggest you read it . It is a !980s USSR military compound used to assist soldiers on long arduous patrols in Afghanistan . How it works is something that assists many people in everyday life including athletes . You won’t find it in the west because of the Big Pharma influence but hey , it looks very useful.

Open up your mind ! There is a whole back catalogue of older drugs that are very cheap & effective in situations other than those originally targeted. May I suggest Botox for one? No one is dying from Meldonium -in fact the opposite . Everyone on the… Read more »

Awwww, that’s so cute. Former coach 20 time zones away stands up for swimmer. Regardless of how any of us feel about Efimova and her two doping infractions, Vyatchanina does have a point. It’s May 6th and two tests were back in February. How long does it take for a final WADA ruling one way or the other. I haven’t decided if this lengthy delay increases or decreases the likelihood of a green light for Efimova but it certainly must be messing with her.

Well I actually agree that due process dictates that all the Meldonium cases get resolved in a lot quicker fashion. It should be an automatic reinstatement if someone meets the criteria but I think in her case it is not so clear. Can someone tell us the dates of her positive tests cause I thought one was in March and the positive tests were after a clean test in January?