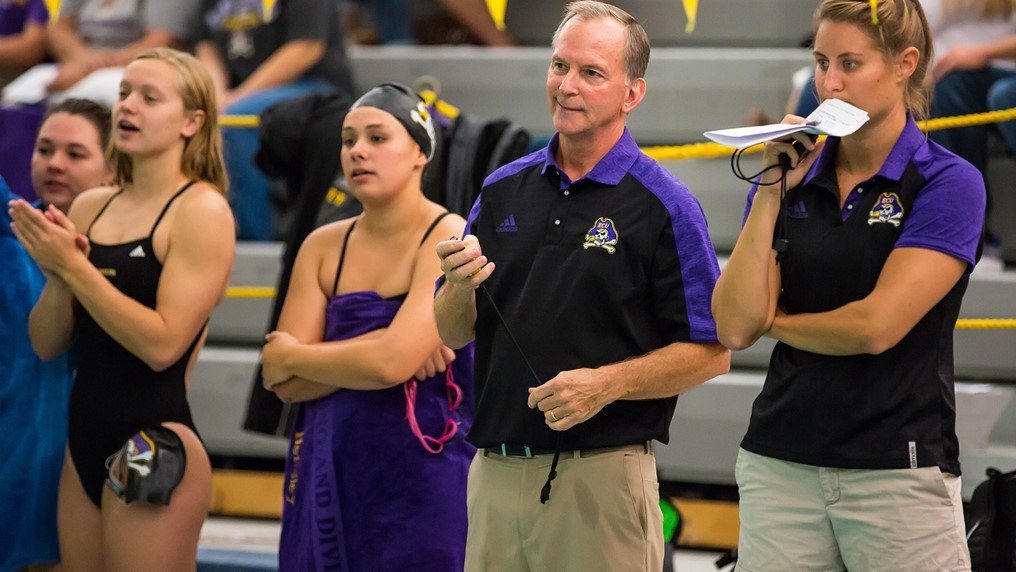 The East Carolina swimming and diving program received commitments from a pair of international swimmers and two American-born athletes during... Current photo via East Carolina Athletics

Texas native Gavin Erdman, currently a freestyle swimmer at Indian River State College, is the Pirates’ first male signee for the 2017-18 season and will enroll next fall.

The women’s team will welcome three new faces: Hannah Nissen (Copenhagen, Denmark), Jenni Giacalone (Huntersville, N.C.) and Paulina Majszutowicz (Szczecin, Poland) for the 2017-18 campaign. Nissen and Majszutowicz each own times that would’ve made them medalists at the 2016 American Athletic Conference Championships, including 400 IM gold for Nissen. Giacalone is the first signee for diving coach Darian Schmidt, who joined the coaching staff over the summer.

“Recruiting never ends for us,” Kobe said. “We are constantly looking to add new faces to the program that will come in and challenge the current roster right away. As a staff we have done just that with this early group of signees.”

Coaches View: Gavin will be a good addition to the roster next season. His times after his first year at IRSC were very impressive and his results so far this season have us very excited about what he will bring to the table in the fall. Depth in the sprint free events are always good; his impact in the individual events and relays will be big for our team next year.

Erdmann On Signing With ECU: “I chose ECU because I believe that it has a lot to offer to help me excel both in the pool as well as in the classroom.”

Coaches View: Hannah is a very talented IM and backstroke swimmer. Her times upon arrival will have an immediate impact on the roster and conference landscape. She had many different options when selecting her school and we are very excited to have her with us next season.

Nissen’s On Signing With ECU: “I strongly believe that it will be highly motivating for me to swim at ECU. It will be good for my swimming to explore new ways of training in a completely new and more professional environment. I’ve been dreaming about swimming in the states and I’ve only heard positive things about ECU, therefore I think it will be a great place for me to swim and study.”

Coaches View: Jenni was a big grab for us. With the half of the women’s diving team graduating this season, and the other half entering their junior or senior season in the fall, it was important that Coach Schmidt land a building block athlete for the future of the women’s program. Jenni checks all the boxes. Since the start of the recruiting process it has been clear she is a great kid, super talented and eager to be a Pirate. She should come in ready to mix it up with the top divers in the conference next fall.

Giacalone On Signing With ECU: “I felt at home as soon as I stepped on campus; I am so excited to be part of the ECU family! Go Pirates!”

Coaches View: Adding Paulina to the team will be a big boost for the ladies next season. With returning senior Vendela Norrman, we should have two of the top breaststrokers in the conference next season. Through the recruiting process one thing was very clear, Paulina takes her swimming very seriously and is a very hard worker. Her training schedule at home is very intense, and her attention to detail in picking a school was impressive. We are very excited she decided ECU was the place for her and look forward to her impact on our program and within the American Athletic Conference.

Majszutowicz On Signing With ECU: “It’s a great opportunity to improve my swimming skills. [The school has] a lot of majors, great contact with coach and a beautiful campus.”