Dylan Cudahy Verbally Commits to the University of Virginia 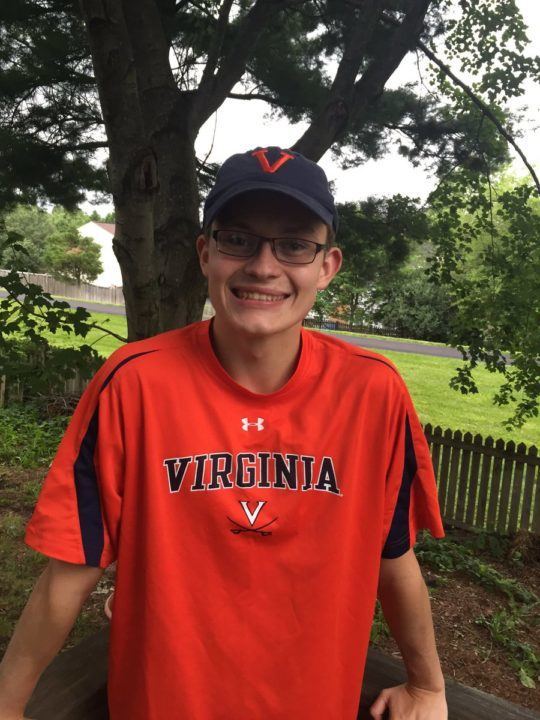 Dylan Cudahy of Machine Aquatics in Virginia will remain in his home state and swim collegiately for the University of... Current photo via Dylan Cudahy

Mid-distance freestyler Nick Grulke from Mission Viejo Nadadores has announced his intention to swim at Penn beginning in the 2022-23 school year.

Dylan Cudahy of Machine Aquatics in Virginia will remain in his home state and swim collegiately for the University of Virginia beginning in the fall of 2017, he announced on Friday.

Proud to announce my verbal commitment to swim for the University of Virginia! #WAHOOWA pic.twitter.com/MvKRmhqVMA

Cudahy joins the program as a distance freestyler – a discipline in which the men’s program has a long history of success, but one that has been quiet under current coach Augie Busch‘s regime. The group will be due for huge growth in the next few years, though, with freshmen Sam Manan and Matt Hrabchak finishing as the team’s two-best 500 and 1650 freestylers last season and Brendan Casey due back from a redshirt season after similarly leading the Cavaliers in the distance events as a freshman in 2015.

Of course, Virginia senior-to-be Leah Smith has stamped a distance brand upon Charlottesville from the women’s side of the program as the two-time defending  NCAA champion in both the 500 and 1650 frees.

“I looked at many different schools and swim programs, and UVA turned out to be the perfect setting for me,” Cudahy said of his decision. “I was born and did most of my growing up in Charlottesville. I love the tradition of UVA swimming and the vision that Augie Busch articulated to me for the program is exactly the type of program I want to be associated with.”

“Plus,” he echoed, “I intend to pursue a career in architecture and who better to learn from than Thomas Jefferson?”

Cudahy, swimming for Herndon High School, was the Virginia 6A (big schools) state runner-up in the 500 free as a junior last season. This commitment is an important one for Virginia even beyond Cudahy’s specific times and potential – the Cavaliers will only have 4 swimmers return on next year’s roster, men and women combined, who are from the state of Virginia. That number will at least double with the incoming freshman class this fall, but still lags well behind their in-state competition from Virginia Tech and pulls them only about even with their cross-border rivals from North Carolina. Busch has big swimming roots in the west from his time at Arizona; in the south from his town at Houston and Arkansas; and the past two years, he’s really grown the program’s footprint on the Atlantic coast, though he’s mostly hit states around Virginia as compared to in the Commonwealth itself.

With still two full training cycles to go before he has to swim his first ACC Championship meet, Cudahy’s best times in the 1650 free and 400 IM are already good enough to put him in the scoring C-Final of the meet based on last year’s times.

Best wishes Dylan. Who knows how fast you can go. I suspect you are in for a huge growth spurt. At 6’7″ you may be the best ever in Cav history!

You meant to say ‘tallest’….

Wahoo Wah Dylan and congrats. One of the best decisions you will make. Go Hoos!